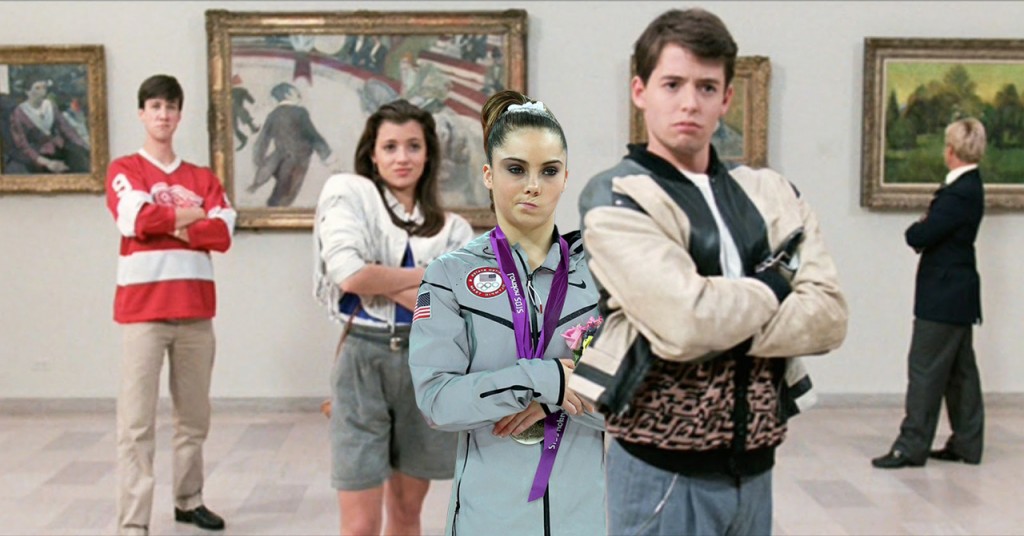 American women cleaned up pretty well at the 2012 London Olympics. Thirty percent of American woman athletes took home medals, while only 15 percent of their male counterparts could boast the same. Even more impressive, U.S. women Olympians took home more medals than all but four countries. That’s what sports equity will do for you (thanks Title IX!).

Tainting a spectacular 2-1 victory by the U.S. women’s soccer team over Japan, the terms “Jap,” “Pearl Harbor” and “Hiroshima” started to trend on Twitter. This display of prejudice (taking place on the anniversary of the Nagasaki bombing) also played out after Japan’s win at last year’s World Cup match. Tweets such as, “That’s for Pearl Harbor” defeated the underlying purpose of the Olympics: uniting world nations over common ground.

A big congratulations to 17-year-old Claressa Shields from Flint, Mich., who made history as the first woman to take home a gold medal for middleweight women’s boxing (this was the first year women boxers were allowed to compete). She was also the only American boxer to top the Olympic podium this year, women or men.

Thumbs down to NBC’s embarrassing, highly sexualized montage of woman athletes. Titled “Olympic Bodies in Motion” and complete with slow-mo and a soundtrack better suited for soft-core pornography, the station not only objectified and demeaned world-class athletes but wasted air time that would have been better spent highlighting their feats rather than their midriffs and thighs. The network heard the outcry to the video loud and clear—it was pulled soon after it aired.

Michelle Obama and Gabby Douglas graced Jay Leno’s stage. Can you imagine a better pair of strong women? The First Lady was not impressed with Douglas’ choice of celebratory meal after her Olympic victories–an Egg McMuffin–but otherwise it was a lovefest between the two. Douglas became the third consecutive U.S. athlete and first African American to win the all-around gymnastics title. The women’s gymnastics team earned the U.S. its first team gold in 16 years—and only the second team gold for the women’s Team USA in the history of the Olympics.

To Caster Semenya, the South African 800-meter track runner who won a silver medal in her Olympic debut. Semenya had to overcome an ugly controversy over her gender identity after her triumph in the track World Championships in 2009; she showed bravery to face the world again. Thumbs up, too, to South Africa for having Semenya carry the country’s flag in the opening ceremonies. But thumbs down to British TV pundit Colin Jackson, a former hurdler, for suggesting she had “deliberately avoided winning so as not to stir up fresh controversy like that in 2009.”

What would we do without memes? Big thumbs up to the endlessly entertaining “McKayla is Not Impressed” Tumblr that sprouted over the weekend. Moroni’s silver medal scowl is seen on the moon, on Oprah’s stage and hanging with Ferris Bueller (above), among other places. Even if Maroney isn’t impressed, we sure are.

But thumbs down for commentators—professional and casual alike—for insinuating that Maroney is a “mean girl,” a “brat,” and showed “poor sportsmanship” after her vault final. She might only be 16, but Maroney and the rest of the women’s gymnastics team are tough competitors who have been training for the gold—and nothing less—for most of their lives. Maroney wasn’t showing entitlement, but disappointment with herself for underperforming. Michael Phelps has also been caught looking pretty miffed—and throwing his goggles into the pool—over losing races he thought he clinched. If Phelps is allowed room to be disappointed over not getting to the top of the podium, why can’t Maroney?

Thumbs down for the gender inequality that still exists in the Olympic Games. Though women are much more equally represented than they were 30 years ago, nine sports still have unequal gender representation and, overall, women are missing out on about 30 medals that are only available to men. The disparity was described by Olympics minister Tessa Jowell as being “symptomatic of wider discrimination against women in sport”.

Photo of Olympic gymnast McKayla Maroney and her “not impressed” look from the Tumblr McKayla is Not Impressed.