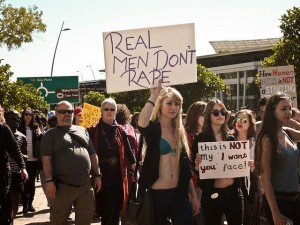 Rep. Todd Akin (R-Mo.), a current U.S. Senate candidate, raised America’s consciousness last week when he revealed that there are people out there who believe that 1) there is such a thing as “legitimate rape” and 2) women cannot get pregnant from “legitimate rape” because their reproductive systems go on some sort of anti-rape lockdown.

When Akin’s comments went viral, many conservative politicians, including Mitt Romney, called for his resignation. Meanwhile, feminists across the media and blogosphere started engaging others in positive, rape-awareness-raising discussions. A copy of Our Bodies, Ourselves is even being hand-delivered to Akin.

Yet despite Akin’s political fallout, male politicians are still eager to dictate when/where/why/how women are raped, get pregnant and have abortions. At a campaign stop in Harrisburg, Penn. Monday, Senate candidate Tom Smith was the latest to weigh in on Akin’s comments.

While speaking at the Pennsylvania Press Club, Smith started off by telling AP reporter Mark Scolforo that Akin should not have made his offensive statements. But when pressed by Scolforo on whether rape and incest exceptions should be made for abortion, Smith calmly said, “No exceptions.” Scolforo pressed on, and Smith got personal.

Here’s the transcript (and the audio recording):

MARK SCOLFORO, ASSOCIATED PRESS: How would you tell a daughter or a granddaughter who, God forbid, would be the victim of a rape, to keep the child against her own will? Do you have a way to explain that?

SMITH: I lived something similar to that with my own family. She chose life, and I commend her for that. She knew my views. But, fortunately for me, I didn’t have to … she chose the way I thought. No, don’t get me wrong, it wasn’t rape.

SMITH: Uh, having a baby out of wedlock.

SMITH: No, no, no, but … put yourself in a father’s situation, yes. It is similar.

When questioned if he was drawing that comparison, Tom’s answer was clear, ‘no, no, no.’ Tom was speaking to the difficult decision faced by his family, not the nature of his daughters conception.

Still, just a week after Akin rocked the nation with his tone-deaf remarks, Smith touched a raw nerve. To some, he seemed to dismiss consent as a major issue, and instead reinforced the traditionalist belief that anything a woman does sexually outside of marriage is damaging, dirty and forbidden.

As Irin Carmon writes in Salon:

If you believe pregnancy from rape and pregnancy from sex out of marriage are “similar,” then you implicitly believe that the problem with rape is that it’s non-sanctioned sexual activity, as opposed to a crime against a woman’s person.

Smith’s statements might belong more in 1912 than 2012, but they do cling to the misogynistic through-line of the rape-and-abortion discussion among many contemporary male politicians: a reluctance to acknowledge woman’s autonomy, whether over her own body or life choices. Though Smith stopped himself from saying what he would have decided for his daughter, he didn’t need to say it: She chose “the way” he “thought.”

And in Smith’s anti-choice world, it’s really no choice at all.