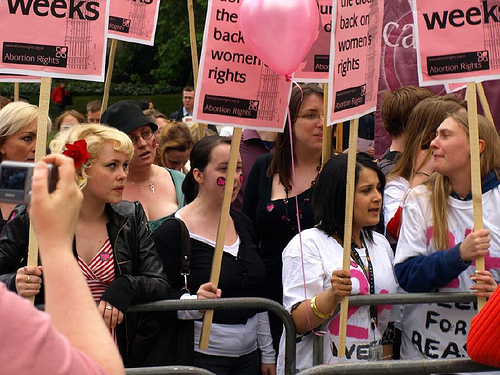 Following a string of anti-choice efforts which began when the British coalition government came to power in 2010, its recent cabinet reshuffle has resulted in even more anti-abortion ministers at the top.

Maria Miller, promoted to both culture secretary and minister in charge of women and equalities, has a track record on abortion rights and gay rights so retrogressive one might think her appointment is some kind of sick joke. Miller has previously voted to reduce the time limit after which a woman cannot legally have an abortion from 24 to 22 weeks; introduce compulsory counseling and a ‘cooling off period” for those wanting abortions; and remove abortion counseling from abortion providers and open it to “independent” parties (i.e., anti-choice organizations). Miller has also voted against measures giving gay couples adoption rights and lesbian couples the right to fertility treatment. Equalities minister indeed.

British women may have thought they had reason to celebrate with the departure of health secretary Andrew Lansley, who earlier this year forced the Care Quality Commission to divert £1 million to inspect abortion providers–which amounted to little more than a witch hunt and found “no evidence that women had poor outcomes of care.” But Prime Minister David Cameron simply ensured that Lansley ‘s place was taken by another anti-choice man, Jeremy Hunt, who is on record voting to reduce the abortion time limit.

Britain’s women have seen stealthy attempts to erode abortion rights ever since the coalition government (which has a Conservative majority) came to power in May 2010. Prime Minister David Cameron and his foreign secretary William Hague were already on record as having voted to reduce the abortion time limit. By that October, a new conservative MP, Therese Coffey, proposed that women seeking abortions for mental-health reasons should have to undergo mental health assessment and counseling–and be informed of mental-health risks of abortion. Around the same time, newspapers began reporting a previously unheard of problem: “U.S.-style anti abortion protesters” targeting British abortion clinics. The coalition did little to dispel its reputation for sympathizing with anti-choice agitators when, in May 2011, it appointed the anti-abortion, pro-abstinence religious organization Life to the government sexual health advisory body.

It didn’t stop there. In 2011, MP Nadine Dorries began her concerted attack on the abortion law that has served British women since 1967. Dorries has repeatedly campaigned to strip abortion providers of their role in counseling patients and instead offered it to anti-choice propaganda organizations such as Life and Care Confidential. Although her proposal was heavily defeated in September 2011, the possibility remains that it may yet be reconsidered, and with anti-choice ministers now in charge of both health and women’s well-being, the likelihood of further attempts to meddle with abortion law seems even greater.

However, there is a small silver lining to the ugly cloud that the cabinet reshuffle has cast: A strong supporter of Dorries’ proposals, Anne Milton, has departed from the cabinet, and pro-choice MP Anna Soubry has been appointed as a junior health minister, hopefully acting as a counterweight to Jeremy Hunt. Daniel Poulter, a former obstetrician and women’s health specialist who argued against Dorries’ anti-choice bill in 2011, has also been appointed to the Department of Health.

Women in Britain can only hope that these voices of sanity will be heard over the anti-woman, anti-gay din that the new cabinet is likely to make. Those of us who have watched the war waged on our American sisters know what a great price women will pay if anti-choice ministers are not challenged and held to account by the public whose support they rely on.

Image of pro-choice demonstration in England from website internets dairy via Creative Commons.