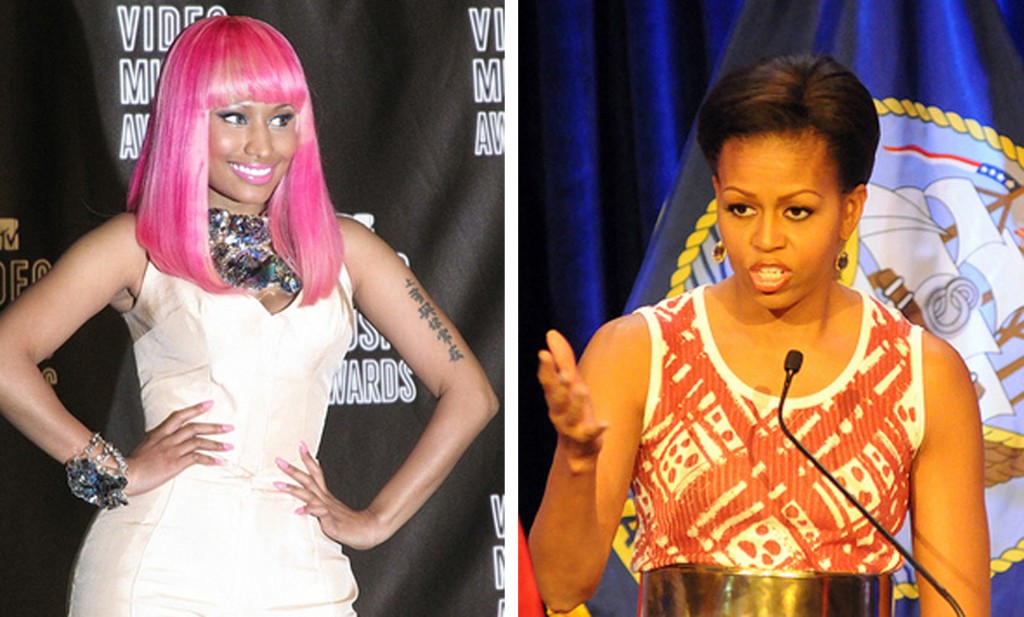 During this past week of presidential politics, the contrast in depictions of black women in the public sphere couldn’t have been more striking.

On one end was the dignified, eloquent First Lady Michelle Obama, universally praised for her speech at the Democratic National Convention. On the opposite end was rapper Nicki Minaj seemingly “betraying” her fan base (specifically African American hip-hop heads) in a mixtape by lyrically “endorsing” Republican presidential candidate Mitt Romney while simultaneously insulting and blaming the economic recession on “lazy bitches.”

Whether  or not we should take seriously Nicki Minaj’s politics, which have led quite a number of Twitterers to unleash a barrage of misogynistic comments and death threats, what is most peculiar to me about these contrasts in black womanhood is the script of respectability.

I, like so many other women, beamed with pride when Michelle Obama emerged on the DNC stage in her elegant Tracy Reese dress and delivered her equally classy speech that, among other things, championed women and families of all stripes. Still, when articles penned by black women offer such headlines as “Michelle Obama Has Redefined Black Women” or “The Undeniable Aura of the First Black Lady,” I detect the anxiety that still undergirds so much of our public discourse after so many years, decades and centuries of being burdened with demeaning, dehumanizing stereotypes.

[What Michelle Obama] did for millions of black women and girls here, and around the globe, was humanize us. She softened us.

You know the same wound that prevents you from the mere thought of showing your natural hair (because it’s ‘nappy’),… the same wound that caused little dark-skin girls (and grown women) to secretly wish they were a tone or two lighter… That wound. That ugly little wound, that can now seek refuge in the era of Michelle Obama.

Finally, it seems, we have in the public sphere a black woman who is loved, respected and acknowledged both for her physical appeal and intelligence. But mostly, we seem to be basking in that long-held quest for respectability as black women.

While this past week might have been Michelle Obama’s finest hour, we should not overlook how her opponents have worked hard in the past to “disrespect” her, as the Crunk Feminist Collective reminds us about “disrespectability politics.” She’s been put down for everything from being “unpatriotic” to being endowed from behind.

When we contrast the respectable presentation of Obama with the negative disrespect she had garnered in the past, the narrative that emerges is one of exceptionalism. I, too, would love to gush at the thought that Michelle Obama has “humanized” and “softened” the image of black womanhood, and in many ways, she has. However, like so many successful black women and men, her respectability is often held as the exception, not the rule.

By contrast, negative stereotypes of black womanhood that have prevailed during the era of Michelle Obama—from hypersexual rappers to the Basketball Wives of reality TV—are held up as the rule more than the exception.  Indeed, if one disagrees with Michelle Obama, it is most convenient to recast her not as the poised “Mom-in-Chief” but as just another “angry black woman.”

So when I read multiple comments praising the First Lady for representing black womanhood in the best possible light, I can’t help but question the politics of respectability that we are using to judge not just one individual but an entire race of women.

More than that, when Obama’s opposite—as represented by a Nicki Minaj not only in her public rhetoric (be it playful, satirical, or genuine) but also in her dolled-up appearance, surgically altered body and lyrics that constantly insult other black women—is depicted as the ultimate “Respectability Fail,” what different boxes and restrictions are we setting up for “appropriate” black womanhood?

When I reflect on Minaj and her theatricality—from border-crossing identities to gender-bending performances to party-line subversions—I see a black woman making an obvious farce out of the raced, classed and gendered stereotypes we are expected to embody. Who can take seriously a Barbie? Why do we not see in Nicki Minaj’s literal embodiment of plasticity, grandiose wigs and in-your-face fakery a parody of commercialized pop stardom and rap culture?

And if, after all the cartoonish artificialities, we view Minaj as a “realer” image of black womanhood—in contrast to the “exceptionalism” of the First Lady—then how can respectability politics save us from the ingrained and systemic process of racist and sexist thinking?

One image of black womanhood calls out the absurdity of a stereotype, while the other invites us to reject it outright for a more human depiction. Nonetheless, I would hope that in praising one while demonizing the other we don’t set up new confinements in which black womanhood can only find approval through a politics of respectability that looks, behaves and votes a certain way.

It is only in recognizing the full range of our humanity and our complexity that we as black women can have more choices in our media representations. The First Lady opens up many opportunities, but Nicki Minaj reminds us of the traps.

Photo of Michelle Obama speaking at the 2011 Military Child of the Year Award ceremony from Flickr user AN HONORABLE GERMAN via Creative Commons 3.0.

Recognizing the Domestic and Childcare Workers That Help Women in Medicine Succeed
‘The Second Half’: Ellen Warner’s Portraits of Life Over 50
Alopecia Isn’t a ‘Cosmetic Issue’—It’s a Serious Autoimmune Disease