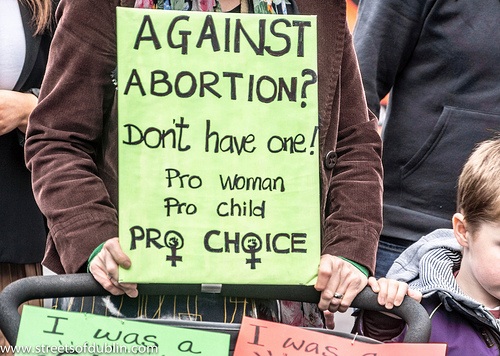 Last month, I wrote for Ms. about the increased number of anti-choice politicians in the British government. Now, concerns that newly appointed ministers Maria Miller and Jeremy Hunt would continue their anti-abortion track records are swiftly becoming a reality. This month, both ministers advocated in the U.K. media for a reduction of the time frame in which women can access legal abortions.

First it was Miller, laughably appointed as Minister for Women and Equalities, who earlier this October stated that the time limit should be reduced from 24 to 20 weeks of pregnancy because “medical science has moved on.” Claiming her main concern was “the impact [of abortion] on women and children,” Miller also stunned pro-choice women by describing herself as a “very modern feminist.” Echoing the words of countless appalled commentators, columnist Mary Ann Sieghart wrote, “You’d think a very modern feminist would take more care to look at the fact […] that advances in medical science have had no effect on babies’ survival rates below the legal limit of 24 weeks.”

Amazingly, the derision heaped on Miller’s fictionally based rationale did not deter health secretary Jeremy Hunt from adding his two cents to the debate. Just days after Miller’s comments, Hunt said of the abortion time limit, “My own view is that 12 weeks is the right point.” Hunt’s comments were met with disgust by pro-choicers such as feminist writer Laurie Penny, who pointed out that the tiny percentage of abortions carried out after 20 weeks are mostly performed on “teenagers who did not recognize the symptoms of pregnancy, low-income women traveling from Northern Ireland, [and] women carrying fetuses with severe or fatal birth defects which cannot be detected before 21 weeks.”

The Irish question has also received renewed attention since a branch of Marie Stopes, a private women’s healthcare organization, opened for the first time in Northern Ireland last week. Unlike the rest of the United Kingdom, Northern Ireland is not covered by the 1967 Abortion Act, so abortion access is greatly restricted, causing approximately 1,000 Irish women a year to travel to England to obtain an abortion. Despite the fact that the Marie Stopes clinic will only provide abortions up to nine weeks and within the existing legal framework, 40 protestors picketed the clinic on its opening day, demanding its closure.

In the Republic of Ireland, abortion remains illegal, with the only exception being to save the mother’s life. In 2011, 4149 women traveled from the Republic to England for abortions, including 150 girls under 16.

While England prides itself on a more liberal abortion law than its Irish cousin, the visibility and outspokenness of anti-choice politicians is of concern at a time when U.S.-style anti-abortion protests by 40 Days for Life are being held in the U.K. yet again. Those actually in the business of letting women make their own decision continue to speak sense, such as the Royal College of Obstetricians and Gynecologists, which stated there was no reason to interfere with the current time limit. Prime Minister David Cameron was eager to distance himself from Jeremy Hunt’s comments, saying there were no plans to alter the law, but confirmed that his 2008 vote to lower the limit to 20 weeks was “because I think there are some medical arguments for that.”

The willingness of U.K. MPs, including our own prime minister, to hide behind non-existent “medical arguments” for taking away women’s choices, emphasizes a need for extra vigilance at this time. While it may be all talk at this stage, a look at the War on Women being waged across the Atlantic shows that anti-woman words can all too easily become policy if we do not take them seriously.