Canada Is No Safe Harbor for Reproductive Rights - Ms. Magazine
Skip to content 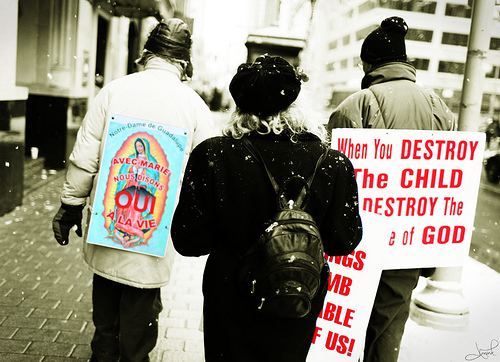 Every election year, disgruntled Americans threaten to move to Canada if the vote doesn’t come out the way they want it to, and 2012 was no different. Prior to election day, progressives prepared to move north; once the results were in, conservatives took to social media to announce similar plans, and were immediately mocked for their lack of knowledge about this socialist paradise. In one area, however, Republicans were not as far off the mark as you might think: women’s reproductive rights.

Earlier this year, Conservative Member of Parliament Stephen Woodworth (CON-Kitchener-Waterloo) introduced Motion 312, which sought to reopen the definition of when a human life begins for the purposes of Canada’s Criminal Code. You may recall a number of similar “redefinition” attempts in the U.S., including VP candidate Paul Ryan’s failed 2012 bill to grant full personhood to fetuses. Woodworth’s bill, initially dismissed by national media and labeled “unfortunate” even by Prime Minister Stephen Harper, was subject to a free vote–meaning MPs are not asked to vote along party lines–on September 26.

The bill was defeated, but nearly one third of parliament voted in its favor, including half of the Conservative cabinet and the Minister for the Status of Women, Rona Ambrose. MP Mark Warawa (CON-Langley) introduced Motion 408 the very next day, seeking to condemn the practice of sex-selective abortion and keep the debate alive in House of Commons. Motion 408 bears striking resemblance to the Prenatal Nondiscrimination Act (PRENDA) that failed to pass the U.S. House in May of this year, only 30 yeas short of the two-thirds majority required.

There are currently no restrictions on abortion in Canada, and it is covered by provincial health care. Section 223 of our Criminal Code asserts that a fetus becomes a “human being … when it has completely proceeded, in a living state, from the body of its mother.” However, access remains limited to women in rural areas and in the entire province of Prince Edward Island, where no abortion facilities exist.

PM Harper has refused to disclose his personal beliefs on a number of social issues, including abortion and same-sex marriage, preferring to defer to the majority opinion of Canadians. Harper is nothing if not politically shrewd, and there’s every reason to believe he would support anti-choice legislation if it were politically expedient; he’s a member of the Canadian Alliance, a socially conservative mega-church in the style Americans are familiar with, and his government is in the midst of opening an Office of Religious Freedom.

In short, popular opinion is all that stands in the way of reopening the abortion debate in Canada. Last month, more than 300 anti-abortionists from across the country met in Toronto with the explicit goal of “transforming our culture,” the theme of the National Pro-Life Conference. The conference was attended by politicians, local activists and organizers, crisis pregnancy center employees, church representatives and university and high school clubs, all determined to limit access to abortion and hormonal birth control in Canada. The then-imminent American election loomed large; Obamacare and Planned Parenthood were the butt of many jokes, and there was even a call for prayer and fasting to ensure Mitt Romney’s victory.

MP Brad Trost (CON-Saskatoon-Humboldt), speaking alongside Woodworth, referred to Canada as one of the few countries where it is “complete open season” on abortion. When he entered politics in 2004 and formed a tri-partisan pro-life caucus, the atmosphere felt hostile and hopeless. Now, in 2012, Trost believes abortion will be a “regularly talked about topic” and “part of the Canadian political debate.” Fellow panel member Jim Hughes credited part of this shift to receptive coverage by the relatively new Sun Media TV network (nicknamed “Fox News North”) and the National Post (Conrad Black’s pet national newspaper).

Life Canada commissions an annual national survey on abortion and euthanasia, conducted by the respected polling organization Environics. They have found an 18 percent increase in Canadians who favor some restrictions on abortion, up from 54 percent in 2002 to 72 percent in 2011. At the National Pro-life Conference, a Life Canada representative boasted that the poll questions were carefully worded to “educate” Canadians and prompt them to give favorable responses, but these results are still quoted by politicians and widely reported in the media.

MP Trost joked that Canadians like to think they’re different, but follow in the legislative footsteps of Americans “99 percent of the time.” Trost urged the movement to lay the groundwork of public opinion, so that when Roe v. Wade is overturned–that’s when, not if, he said–the Canadian political system will be ready to fall in line.

The New York Times, Salon.com and President Obama himself contended that Roe v. Wade would not have survived a Romney presidency. America dodged a bullet by less than 3 percent of the popular vote. If the country is not so lucky in the future, there’s no guarantee you’ll find a safe harbor in Canada, either.

About Kim Fu and Andrea Bennett