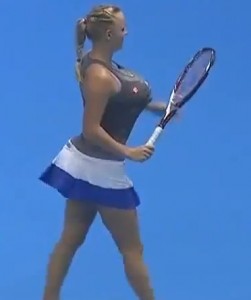 Danish tennis player Caroline Wozniacki is probably a nice person in real life. And I’m sure when she decided to imitate Serena Williams at a player exhibition this week, by stuffing bulky towels down her sports bra and tennis skirt, that she was doing it all in good fun with no serious offense intended. Heck, Caroline and Serena are supposedly even good friends off the court.

Just because Caroline meant what she did to be a light jest of a colleague doesn’t excuse it from being racist. People who jumped to Caroline’s defense this week by saying, “she wasn’t being racist, she’s friends with Serena,” seem to be the same type of people who follow the “I can’t be racist, my best friend is black” logic. It negates the reality that friends can act as ignorant or hurtful as a stranger can, and it sweeps the blatant stereotyping of black women’s bodies under the rug. This isn’t even the first time Caroline has imitated Serena in public; she had done it previously about a year ago when she danced out into the court to a Rihanna song.

No matter how insanely successful black women like Serena become, the legacy of the Hottentot Venus will always be ready to rear its ugly head at an opportune moment. Displayed as a European freak show attraction in early 1800s, the Hottentot Venus, whose real name was Saartje Baartman, helped to feed the white fascination with black female bodies and now remains an everlasting symbol of the dehumanization of African features. The image of Saartje continues to haunt modern Western society whenever someone decides to sexualize a black woman’s physique. If Caroline truly wanted to impersonate Serena, she could have padded her legs and arms to represent Serena’s muscled physique, but she targeted specific body parts–breasts and booty–for her little prank. The supposed hypersexuality of a black woman’s anatomy is a ceaseless trope that is always used to get a laugh. The racist undertones of Caroline’s stunt may not have been deliberate but that doesn’t mean they weren’t there.

Our bodies are not caricatures. This incident did not happen in a societal vacuum where black women’s bodies haven’t been historically degraded as exotic objects. Many people don’t have the cultural awareness to be sensitive of the centuries-old portrayals of black women, so we continue to see bad gestures like this one. It’s easy to tell black people to just lighten up when you are never the butt of the joke.

Caroline should focus more on imitating Serena’s game and not on giving the fans a minstrel show.

The real victor in this is Serena. Though she’s had to endure this kind of derision since she came up in the tennis scene, she continues to win and transcend in the same body that people love to mock.