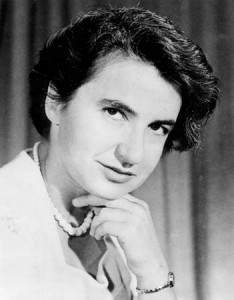 As 2012 draws to a close, I find myself haunted by the ghosts of Nobel Prizes past.

All were dead when these laurels were bestowed.

Why, then, is the disclaimer that she was ineligible for the prize because she had died consistently appended to any mention that British scientist Rosalind Franklin did not share the Nobel Prize in Physiology or Medicine in 1962? Fifty years  ago this month her colleagues James Watson, Francis Crick and Maurice Wilkins did win, for discovering the structure of DNA in 1953–a determination that was largely based upon Franklin’s data, some of  which they had purloined from her lab without her knowledge. Franklin was the first to determine crucial elements of DNA’s  structure, and she published them in the same issue of Nature that  showcased the triumph as that of her colleagues, despite the collaborative nature of  such research.

Yet the implication is that fate, not her scientific peers, stole her glory, because Franklin died of ovarian cancer in 1958 at just 37 and, as many have written, “the Nobel cannot be awarded posthumously.”

However, I don’t believe this is the reason: The evidence leads us elsewhere.

Since the genetic triumvirate won science’s richest accolade, it has come to  seem impossible to exaggerate the medical importance of their discovery. But forgotten amid the anniversary glee is the robust 1950s-era misogyny that served to exclude and marginalize Franklin, disdainfully dubbed  “Rosy” behind her back by male collaborators who nervously eyed her as their competitor, and an intolerably “bossy” one at that.

She was brilliant, experienced and confident, and they wanted her gone. “The real problem, then, was Rosy,” Watson mused in his 1968 memoir The Double Helix. “Clearly Rosy had to go or be put in her place. … The thought could not be avoided that the best home for a feminist was in another person’s lab.”

Unfortunately for her, Franklin’s role in the determination of DNA’s structure was first publicly described by James Watson. “History is written by the victors,” warned Winston Churchill, and The Double Helix minimized Franklin’s scientific contributions and indulged in a wealth of  ad feminam attacks on her supposed need for lipstick, fashionable garb, stylish hairstyle and a more deferential attitude toward the men in the lab— although she had been hired to run her own laboratory.

Watson’s account also made quite light of the orchestrated  theft of her data, as Wilkins spirited the X-ray crystallography she had produced out of a drawer in her lab. Francis Crick later admitted, “I’m afraid we always used to adopt–let’s say, a patronizing attitude towards her.”

This hostility toward women scientists (and the sense of entitlement regarding making off with  their work and tools)  permeated Franklin’s field of X-ray crystallography, even though  a greater-than-usual number of women scientists practiced in it.  For example, British physicist  Sir Lawrence Bragg, often held up as  unusually supportive of women in science, wrote the foreword to The Double Helix without criticizing  Watson’s  flagrant misogyny. While at Cambridge, Bragg himself recounted stealing  a hard-to-obtain tool from another  “lady researcher”  in a Cavendish laboratory and reducing her to tears. How did he justify this? She had “rashly left her door open on leaving her room,” he recalled.

Still,  most accounts ascribe Franklin’s snub not to the lack of esteem held by her fellow scientists, but to the belief that Nobel committee rules barred the posthumous awarding of the Nobel Prize.

This belief is wrong. Until 1974, the prize could be awarded to a deceased person, as long as he or she had been nominated before February of that year. Their nominations enabled both Karlfeldt and Hammarskjöld, for example,  to became laureates after their deaths.

It was nominations, not awards, that were restricted to the living. Had Franklin been nominated for an award up to 1958, the year of her death,  she could have been considered for a Prize that year. But when the sealed 1958 Nobel documents were opened in 2008, they showed that she had never been nominated. So Rosalind Franklin did not fail to receive a  Nobel Prize solely because she had died.

She was dead in 1962 when the DNA  triumvirate received the Prize,  but  why was it awarded a full  nine years after the discovery of DNA’s structure was reported in Nature? Today this delay sounds reasonable, because now, the committee has come to  award discoveries  that have withstood test of time. However the rules of Franklin’s era indicated that the  award was in recognition of discoveries made “during the preceding year.” Had this rule been adhered to, the Prize would have been awarded in 1954, when Franklin was still alive.

Today’s rules  stipulate that only those who die after their award is announced, as William Vickery did, can receive it posthumously. But even that rule is not absolute: The announcement of Steinman’s Nobel Prize was made last year only after the committee discovered that he had died the previous Friday. Technically, this is against the rules, and the Steinman Nobel demonstrates the latitude the committee can take when it wishes to.

Some such as Matt Ridley, Francis Crick’s biographer, claim that Franklin didn’t merit a Nobel because she would never have solved the puzzle of DNA. Why, some ask,  did she not make the discovery first if she had collected all the necessary data? Franklin was, by all accounts, a careful, painstaking scientist, and instead of wildly  proposing unworkable structures, as both Watson and Linus Pauling had done at some point, she preferred to be slower, and correct. The fact that  the others conspired to base their achievement on her purloined data suggests that they well understood its importance.

Yet many aver that her contributions were not important enough to merit the Nobel, and James Watson is among  them.  His 2001 memoir Genes, Girls, and Gamow: After the Double Helix revisited Franklin’s  role in order to denounce her scientific “intransigence” with the same avidity with which  he once assailed her makeup and  hairstyle. Crick disagreed, however, admitting that, given a bit more time, Franklin’s data would definitely  have allowed her  to see the structure herself. However, both stances miss the point that their work was supposed to be a collaboration in which different disciplines, data and styles contribute to jointly solve a problem.

Others claim that Franklin’s  loss was posited on the fact that  only three people can share a Nobel prize, but all four scientists could have been honored by splitting two Nobels, for Chemistry and for Physiology and Medicine, among them.

Still others, such as Bernard S. Strauss, write that Franklin was “not dissatisfied” with the recognition  her work had garnered,  and so would not agree with feminist complaints on her behalf. But no one can know how Franklin felt about her marginalization because she never knew its extent.  Franklin did not live to see her colleagues awarded a  Nobel for work they had all performed. She never knew that their success was based in part upon a conspiracy to seize data from her lab behind her back.  She never knew that one of the laureates would write a book that sought to justify her exclusion by demonizing her as a mediocre scientist, a socially inept co-worker and an unattractive woman. Had she been privy to this information, her alleged contentment might have been swiftly  redefined.

The question of whether Rosalind Franklin should have shared the Nobel prize remains a critical one for scientific culture and practice, and a no less critical question for women. To date, only 10 of the 172 Nobel Laureates in Physiology or Medicine are women. Why?

The 50th anniversary seems an opportune time not only to rectify the mythology surrounding Franklin’s ignoble exclusion, but also to consider her treatment’s larger significance. Women scientists are now more numerous, but they make up only 32 percent of career researchers and are much less likely than men to take on leadership roles, to advance in academia or to achieve the top prizes.

Recognizing this problem, the European Union’s Research, Innovation and Science Commission designed an initiative to encourage young women to pursue careers in science. It was launched in mid-June with a minute-long video “Science: It’s a Girl Thing!” featuring a  multihued trio of pretty young women bedecked in high heels, nylons, lipstick and short skirts.

Like Franklin, the girls targeted by this video are being sent the message that the passion, tools and inventiveness of science are not for them, and that even in the laboratory they are important only so far as they can excite the physical attentions of men.

How could we have forgotten Rosalind Franklin’s dismissal as a scientist over her allegedly undercoiffed hair and missing lipstick? How is it that no one who evaluated this video saw its clear parallels to her and to women’s marginalized  treatment within the sciences?

Women scientists saw it, and almost all were appalled, taking to Twitter, Facebook, You Tube and the blogosphere to register their dismay and disappointment.  To its credit, the EU commission admitted failure and withdrew the video.

About Harriet A. Washington