The Middle-Income Trap: Sexual and Reproductive Rights and Health in Latin America and the Caribbean - Ms. Magazine
Skip to content

From May 16 to 19 this year, advocates from around the world came together in Copenhagen for the Women Deliver conference. We’re spotlighting their work and experiences here on the Ms. blog.

As I was tweeting during Women Deliver, I noticed a new hashtag emerge during the flurry of conference coverage: #LACinvisible. It stood for Latin America and the Caribbean invisible.

While there were several panels that included prominent Latin American and Caribbean activists and experts, it is true that our region had a much lower profile than others in the plenary sessions and side events. But more than anything, it reinforced what I have witnessed in my more than 15 years working as an advocate for sexual and reproductive rights and health in the region: too often, middle-income regions like Latin America and the Caribbean are ignored in conversations about global gender equality and women’s rights and health.

How did we get here?

On the surface, Latin America and the Caribbean seems to have it good. Contraceptive coverage remains high in many countries, and long-fought advocacy efforts have ushered in progressive regional agreements such as 2013’s Montevideo Consensus  on Population and Development, which calls on governments to both enable young people to have a “responsible, pleasurable, and healthy sex life” and eliminate preventable deaths from unsafe abortions.

Yet despite the tremendous progress we have made, there is still much to be done.

While many countries in our region are considered middle-income, staggering inequalities persist. Latin America and the Caribbean has the dishonor of being the world’s most unequal region in terms of income distribution. This inequality is visible in all sectors, from education to health to work life—and that is heavily affected by gender, racial and ethnic inequalities.

If you are a young, black woman living in a poor rural community, you are going to face discrimination on many fronts, in almost every aspect of your daily life. Sexual and reproductive health and rights are no exception.

One little-known fact is that the rate in Latin America and the Caribbean of adolescent pregnancies—the majority of which are unintended—is the second highest in the world . Adolescents—and especially young women and girls—face significant social and legal barriers when attempting to lead healthy sexual and reproductive lives. Even when sexual and reproductive health counseling and contraceptive methods are available to them, often a parent’s accompaniment is required by law or by practice—and even when it’s not, provider bias can prevent a young person from receiving the services they need.

Imagine an indigenous girl living in a rural area where health services and sexuality education are virtually nonexistent. Or a poor, adolescent girl living in an urban area where safe abortion is completely out of reach, either by law or cost or by virtue of the fact that awareness about abortion laws is nonexistent among her and her peers.

It is not surprising then that in Peru, a poor adolescent is nine times more likely to become a mother than an adolescent from a wealthy family. Nor is it surprising that unsafe abortion and early childbirth pose enormous health risks for girls living in poverty.

Compounding these inequalities is the fact that public health spending in the region is far below the world average—one out of every three dollars spent to finance sexual and reproductive health services is paid as an out-of-pocket expense. And while Latin America has some solid policies related to sexual and reproductive health and rights on the books, implementation remains a challenge on at least three distinct levels.

At the national level, funding to properly implement policies is often nonexistent. In addition, providers are often untrained in how to—or unwilling to—provide services such as safe abortion care. Lastly, funding and support for a civil society that can hold governments to task for realizing their promises is lacking.

Right now, the inequalities present in the region are being highlighted by the spread of the mosquito-borne Zika virus. Communities where the virus is prevalent tend to have poor infrastructure and sanitation and little or virtually no access to sexual and reproductive healthcare—not to mention inadequate social support for families with special needs.

Let’s hope this brings attention, funding and political will to an injustice that has been endured by too many for too long. Let’s hope that once and for all, we become #LACvisible. 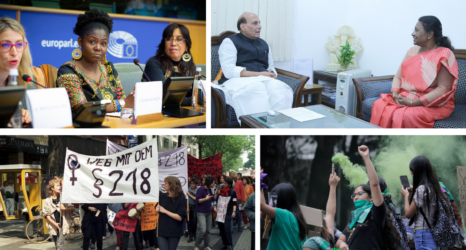 Ms. Global: International Response to the Fall of Roe; Historic Representation of Women in Politics; Feminist Issues at G7 Summit

‘With Sorrow, We Dissent’: The Three Justices Who Rejected Dobbs
Weekend Reading on Women’s Representation: Women Leaders Reckon With a Loss of Abortion Rights; The Lack of Women at G7
Why the Fall of Roe Means You Might Not Be Able To Get Pregnant