Our Policing Problem is Also a Diversity Problem - Ms. Magazine
Skip to content

Before Philando Castile and Alton Sterling were shot by police officers within days of each other, and our country erupted yet again into complex conversations about race and police violence, I called all of the largest local police departments in the country to compile data on the gender and race breakdown of their departments as part of a research study for the Feminist Majority Foundation.

What I found corroborates published research on the subject: Women of color and other minority officers are significantly underrepresented in these departments. According to the Bureau of Justice statistics, only 27 percent of all police officers in local police departments in 2013 were racial or ethnic minorities. Women of color are even more underrepresented, accounting for only 4.8 percent of full-time sworn personnel, according to a 2001 study from the National Center for Women and Policing. The most recent Bureau of Justice statistics on the breakdown of gender in the largest local police departments were published in 2008, and they range from 9 percent female officers in the Las Vegas Metro Police Department to 27 percent female officers in the Detroit Police Department.

Why is this a problem? Well, let’s consider the recently released audio recording, taping the two officers who shot Philando Castile. The taping suggests that they pulled Castile over not because of a broken taillight but because he matched the characteristics of an armed robber due to his “wide-set nose.” This information is disturbing to say the least. It indicates that Castile was stopped and subsequently shot not because he was committing a crime but because he was racially profiled by two white police officers.

Violence is what we have come to expect from a police system that hires primarily white men, who are proven to be more violent and to commit more crimes than their female and non-white counterparts. In order to change police culture, we must improve hiring practices and recruit more women officers and more officers of color.

In 2014, President Obama convened a taskforce on 21st century policing, which released a report that recommended “creating a workforce that contains a broad range of diversity including race, gender, language, life experience, and cultural background to improve understanding and effectiveness in dealing with all communities.” This is because diversity in police departments encourages community policing.

When the racial composition of the police department matches that of the community, citizens are more likely to trust and cooperate with police officers. Diversity in police departments also increases the likelihood that the officers can understand the perspectives of the communities they are committed to serving. We need officers who understand the perspectives of the citizens they are serving—who have lived in their communities and know their culture.

We also need police officers who are skilled in mediation and conciliation—and studies show that minority and women police officers do better than their white and male counterparts in these areas as well. A 2002 National Center for Women and Policing study found that while women comprised 12.7 percent of all sworn personnel in large local police departments, they were indicated in only 5 percent of all complaints of excessive force and 2 percent of sustained allegations of excessive force.

A more recent national study published by the U.S. Department of Justice corroborated these findings, concluding that 95 percent of police crimes are committed by men. Furthermore, reports find that mostly white officers commit police killings. White officers were responsible for the deaths of 68 percent of people of color killed by the police.

We need justice for all of the African American men and women who have died unjustly at the hands of police officers—and diversifying police forces is part of that justice.

Justice is when officers are prosecuted and convicted for these crimes. Justice is starting a conversation about what institutional racism looks like, and how we can dismantle these systems of oppression. And, most importantly, justice is a commitment to hiring officers that reflect the communities they have sworn to protect and serve.

Shelby McNabb just finished her first year at UCLA, where she is getting her Masters of Public Policy. In her free time, she co-hosts and co-produces a podcast, the Left Ovaries, with her best feminist friends. She is also working on a project to provide incarcerated women with access to feminine hygiene products by donating menstrual cups. 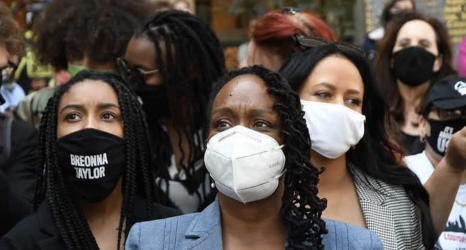 “Care is Infrastructure, Silly”: Feminists Defend Caregiving Funding in Biden’s Jobs Plan
Constitutional Rights for the “Unborn” Would Force Women to Forfeit Theirs
The Ms. Q&A With Ani DiFranco: “You Have License To Be All the Aspects of Yourself and To Be Unashamed of Them”