The Case for a Feminist World Bank President - Ms. Magazine
Skip to content

Calls are increasing for a first female World Bank President in the current Bank presidential selection that happens every five years. A female Bank President would symbolize the increasing power of women—but a woman President alone will not be enough to right the Bank.

The same can be said for a feminist President although s/he likely would laudably promote Bank policies and investments that equally benefit men and women.  S/he likely would strive to eradicate remaining patriarchal mindsets among some Bank staff and Board members.

Without doubt women’s rights and gender diversity promoters, myself among them, believe the Bank should select a feminist non-American President, preferably a woman of color.  The American male monopoly on the Bank’s top job must end.  The Bank’s non-democratic presidential selection process must end.  The U.S., the largest Bank shareholder, has hand-picked all 12 past presidents—every one of them an American male.

Not only should the World Bank have a first feminist President, but even more importantly for achieving the Bank goals of poverty reduction and shared prosperity, its next President must radically transform the Bank’s development model.

Many of the Bank’s current projects are large-scale polluting infrastructure investments that are contributing to our planet’s climate destruction.  These projects usually harm rather than benefit women, men, girls and boys.

Bank leaders have talked the talk on gender diversity and climate change but its policies and investments often do not reflect the talk.  Watchdog reports documenting women’s rights violations in Bank-funded projects include: forced labor by pregnant women in agriculture projects such as in Uzbekistan; project highway construction workers sexually assaulting and impregnating school girls such as in Uganda; and forced homelessness of city slum dwellers and farmers alike whose homes are bulldozed, causing women and girls to turn to sex work to survive such as in Azerbaijan, Cameroon, Georgia, Nigeria, Togo, and other countries.

The Bank’s first feminist President must end this pattern of investments that harm vulnerable women and girls and impoverish communities.

Despite the Bank’s widely-publicized commitment to do its part in combatting climate change, the Bank’s new Environmental and Social Framework (ESF) approved by its Board in August 2016 weakens its longstanding environmental and social safeguards protecting communities from harm.  The ESF will harm everyone but particularly women in low-income countries who depend on forest products and other natural resources for medicine, food and fuel, carry water long distances, and do most farming (an estimated 70 to 80 percent of African farmers are women).  The ESF hardly mentions gender, women and LGBT groups.  It fails to include a freestanding gender safeguard to protect women, girls, men and boys from detrimental impacts.  It guts the Bank’s environmental safeguard policies, which sheltered forests, land, water, biodiversity and indigenous peoples from the negative consequences of forced resettlement and polluting infrastructure investments.

President Jim Kim failed to keep his promise that the ESF would not dilute existing standards.

The first feminist Bank President must ensure that the Bank adheres to the Convention on the Elimination of all Forms of Discrimination Against Women (CEDAW) and other international human rights treaties ratified by the overwhelming majority of member countries.

In 2011, the Bank Board initiated a presidential nomination process by establishing merit-based selection criteria.  Nevertheless, the U.S. prevailed in installing Jim Kim in 2012—despite competing Colombian and Nigerian candidates of at least Kim’s caliber. Now that Kim is serving his final year of a five-year appointment, the Bank Board launched a three-week Presidential nomination period that will close on September 14, 2016.  The U.S. has already weighed in for a second Kim term. The U.S. is likely to prevail with a second Kim term unless the nomination period is extended, the selection process becomes transparent, and the voices of key stakeholders—including most Bank staff, global civil society leaders, major media and think tanks—calling for Kim to resign, are heeded.

Stakeholders, reach out to your World Bank Executive Director and/or Ministry of Finance to demand an extended selection process and nominate feminist changemaker candidates from developing countries!

This post originally appeared at worldbankpresident.org and genderaction.org. Republished with author permission.

Elaine Zuckerman is President of Gender Action. After she joined the World Bank in 1980 as an economist, she went on to create the Bank's first program to globally mitigate Structural Adjustment Loans' harmful impacts on the poor, especially on women, and work in the gender unit. In the 1990s, she was also Coordinator of the Social Agenda Policy Group at the Inter-American Development Bank. 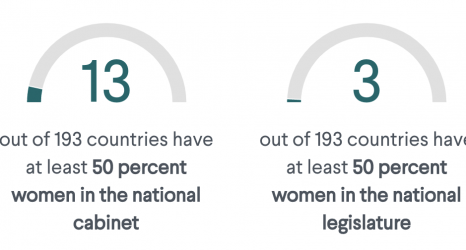 Women, Girls and LGBT Fight for Rights in Myanmar: “We Have to Win This Time”

The Ms. Q&A With Ani DiFranco: “You Have License To Be All the Aspects of Yourself and To Be Unashamed of Them”
The Crime Hidden in Plain Sight: An Interview with Amy Ziering, Director of ‘Allen v. Farrow’
Constitutional Rights for the “Unborn” Would Force Women to Forfeit Theirs