Across the Nation, Indigenous Women Are Fighting for Renewable Energy - Ms. Magazine
Skip to content

To drill or not to drill—that’s the 30-year question Congress has debated over the fate of the U.S.’ largest wildlife preserve, the Arctic National Wildlife Refuge (ANWR). Faith Gemmill has an answer. One of the first projects her organization undertook in 2009 was purchasing a wind turbine for Kaktovik, a mostly Native American community in northeastern Alaska that’s surrounded by the refuge.

“Every year it’s consistently debated in Congress whether they want to allow oil and gas development there [the wildlife refuge] or protect it permanently as wilderness. It’s been a 30-year debate. And so putting that wind turbine up in that community was to show the community members that renewable energy is actually viable,” says Gemmill, executive director of the organization Resisting Environmental Destruction on Indigenous Lands (REDOIL).

Renewable energy is the foundation of REDOIL’s work, says Gemmill. The statewide grassroots effort is working to protect indigenous land from further fossil fuel extraction in Alaska and promoting renewable energy instead.

“Up here in Alaska with climate change, we’re hit first and hit hardest in our communities. We see the impacts first because we live so close to the land,” says Gemmill, who is Neets’aii Gwich’in, Pit River and Wintu and was raised in Arctic Village, which is 110 miles above the Arctic Circle. “If the land is providing everything we need to survive, we need to protect it and keep it healthy.”

Indigenous women like Gemmill are part of a grassroots movement of female leaders and women-led groups across the United States pushing renewable energy as one way to fight climate change and decrease our dependence on fossil fuels.

“Hundreds of indigenous women are very actively pursuing clean, renewable energy. They are fully aware of the challenges that the blind use of fossil fuels has caused, and are continuing to cause,” says Fawn Sharp, president of the Quinault Indian Nation in Washington State. “Climate change is real…Our women know it, and they are active politically. They’re pursuing a better future and following the lessons of our common tribal heritage in their approaches to natural resource management.”

The country’s 566 federally recognized tribes are disproportionately bearing the brunt of climate change, says a 2011 report, and their economic, cultural and spiritual practices are suffering. Because tribes heavily depend on natural resources, severe weather events like droughts, floods and snowstorms can make them particularly vulnerable. Many of these communities are also in isolated areas.

“Most Americans tend to move around a lot. But Native Americans tend to stay put, and if there is impact to our land we feel it intensely,” says Sharp, who is also president of the Affiliated Tribes of Northwest Indians and vice president of the National Congress of American Indians. “We didn’t cause the problem, but we are definitely feeling it. At Quinault Nation, sea level rise and intensified storms have endangered our people, so we are relocating an entire village to higher ground.” The same is true in Alaska, where many indigenous communities have been forced to relocate.

In response, Sharp says many women at Quinault Nation are active in efforts such as protesting against the proposed expansion of oil terminals and oil train traffic in Washington State. They’ve also built a broad-based coalition, which includes non-tribal communities, that opposes these efforts while advocating for clean energy.

“I think throughout Indian country in general we’re seeing this transition of predominantly women saying, ‘Okay, we know what we don’t want, we know the problems that come with fossil fuel infrastructure, but how do we transition away from that in a way that doesn’t take jobs away from people?’” says Kandi Mosset, lead organizer of the extreme energy and just transition campaign at the Indigenous Environmental Network, which addresses environmental and economic justice issues.

Mosset, who is from the Mandan, Hidatsa and Arikara tribes, grew up in North Dakota “surrounded by coal fired power plants.” Now part of Mosset’s work involves figuring out how to transition away from our reliance on the fossil fuel industry, including promoting small-scale renewable energy options for indigenous communities.

“Our biggest hurdle right now, my biggest problem, is the politics. It’s the government politics that come into play, especially in North Dakota, not only on the state scale but on the tribal scale, because our tribal nations are heavily involved in oil and gas development,” she says.

Oil and gas extraction are a major source of revenue and employment in many Native American communities. But shifting to renewables might make economic sense for some tribes, who exercise sovereignty over their lands and natural resources. Tribal lands, which cover almost 5 percent of the U.S., hold an estimated 10 percent of the country’s renewable energy resources. Generating energy from renewables on site could help create new jobs and additional revenue for tribal communities. It could also provide electricity and reduce energy costs. It’s estimated that 14 percent of households on Native American reservations have no access to electricity, 10 times higher than the U.S. as a whole.

Wahleah Johns co-founded the organization Native Renewables last year to help Native American families and communities take advantage of these opportunities. Coming from a big coal mining community on Navajo nation in Black Mesa, Arizona, she was looking at how to diversify their energy options and for something that can “create community ownership and energy democracy.” The answer for Native Renewables is low-cost clean energy, which they’re promoting in indigenous communities throughout the U.S.

“We’re really pumped up about renewable energy and solar and we think it could be one of the added economic drivers for tribes,” says Johns, who also co-founded the Black Mesa Water Coalition. “[In the] Southwest we have some of the best solar resources in the whole world and that’s beautiful. And it’s culturally aligned…Our whole philosophy of Navajo people is based on the sunlight and the way it travels from East to West…The knowledge I want for us to understand, remember and honor is that wind and solar is in actually line with who we are.”

All of these efforts are part of a movement that’s growing nationally, locally and internationally, says Gemmill. In Alaska, she’s now also seeing unusual partnerships in this work, such hunters partnering with conservation groups, which is encouraging. But there’s still much to do, especially given the Trump administration’s response to climate change.

“Not only are we facing down the state of Alaska, we’re facing down the United States Congress and its agencies, who also see the need to develop federal lands in Alaska, which is our ancestral homeland. We’re facing down the companies themselves, huge multinationals,” Gemmill says, “And we’re just tiny little communities standing and facing them down. But we stand on the truth. We have evidence to back us, science behind us and I think we’re winning. I think we’re going to achieve it in my lifetime. As long as we don’t stop and [we] keep the pressure on.”

This story has been supported by the Solutions Journalism Network, a nonprofit organization dedicated to rigorous and compelling reporting about responses to social problems.

Juhie Bhatia is a journalist focused on gender and health issues. Formerly the managing editor of Women’s eNews, she’s also written for The Guardian, Rolling Stone, Nature Medicine and Bust magazine, among others. 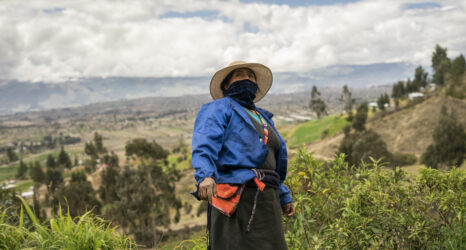