This post is the last in a series produced by ADL in partnership with Ms. exploring different aspects of what we’re calling the “male supremacy movement”—a network of formal groups and informal communities dedicated to subjugating women—and its intersections with the so-called alt-right’s racism.

While incels are focused almost primarily on sex, the concerns of Men’s Rights Activists (MRAs) are broader: they believe men are being railroaded daily by scourges of feminism that include false rape accusations, alimony settlements and demands for equal pay. MRA leader Gavin McInnes neatly encapsulated the paternalism of their philosophy when he bragged that he was helping women understand the “dangers” of feminism.

It’s not unusual to find MRA and incel language on alt-right message boards. In one instance from altright.com, an anonymous poster berated white women for their selfish choices. (“Chad” is the incel term for a man who is attractive to women.)

Your ‘freedom’ has brought white people and our land nothing but hardship. You whores [are]… sieving our entire race just because you want to sleep with Chad for a night and have one of his criminal bastard genes, and then pretend to have a career, instead of going for a breadwinner and breeding six warriors while being a happy hausfrau.

Meanwhile, Pick Up Artists (PUAs) are longtime players in the misogynist manosphere—and their putative leader, Daryush Valizadeh, who goes by RooshV, has dedicated himself to decrying feminism, belittling women and teaching men how to be an effective sexual predator.

Incels and PUAs believe that date rape is not only defensible, but is a skill that can and should be taught. RooshV himself has publicly defended violent incel tendencies, including in a Twitter post the day after a violent incel attack in Toronto left dozens dead or injured. 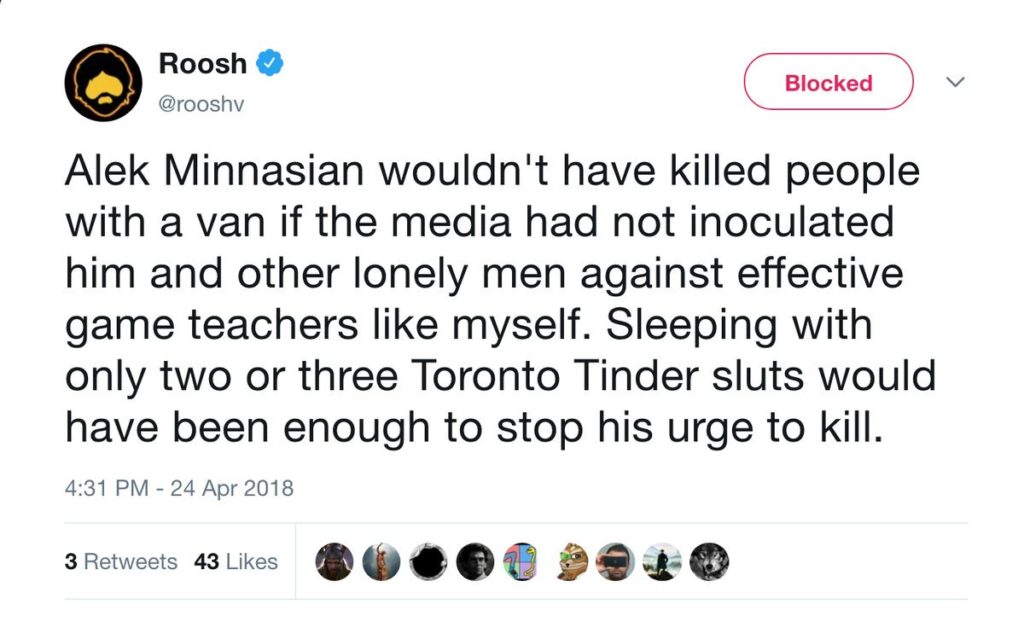 The underlying belief—that women should be sexually available to men at all times, for any reason, without argument—is what presumably led RooshV to argue for the legalization of rape.

RooshV is a poster child for the crossover potential between MRAs and the alt-right. In 2015, he published an admiring review of anti-Semite Kevin MacDonald’s “The Damaging Effects of Jewish Intellectualism and Activism on Western Culture,” which led to an invitation to speak at a conference organized by the white supremacist National Policy Institute. In 2016, RooshV posted a defense of white nationalist and altright.com founder Richard Spencer, and the alt-right more generally, on his website. (As it happens, RooshV is not white. He will never be embraced by the alt-right, no matter how enthusiastically he stands for their racist, sexist ideology.)

One of the most powerful inspirations to violent misogyny across all of these movements—alt-right, MRA, incel—is the trope of white men as victims who are falling prey to feminism, changing social norms and progressive thought and politics.

“Make no mistake that this is a war against heterosexual men,”RooshV wrote on his website. “This is the war of our generation. This is a war against men who are presumed guilty at birth, and whose innocence is mere purgatory until a newly devised outrage sends them to hell. You are the enemy and you will be denounced in the form of ‘misogynist,’ ‘creep’ and ‘sexist,’ and this denouncement will stay with you and affect your livelihood in ways that modern technology allow. You will be prosecuted by the fattest and ugliest cunts of the land, with no hope of appeal.”

This phobia is older than most of the men who populate the alt-right. It’s difficult to pinpoint the moment this anxiety took hold, but plenty of men in the early 20th century found the whole suffrage movement to be frankly insulting and possibly dangerous. In the 1940s, a lot of men weren’t thrilled when they returned from fighting in World War II to find their jobs had been very ably taken over by women. The women were immediately booted from the jobs, of course, and men went on to enjoy another 20 years or so of largely unchallenged entitlement.

But since the 1960s, women have been speaking more loudly, challenging more behaviors and laws and bringing feminism to the masses. Progress has been slow and sporadic, but it’s still happening far too quickly for misogynists—who worry that every step women take towards equality is an attack on men’s status. In many ways, Donald Trump’s 2016 victory, secured after a recording of the candidate bragging about sexually assaulting women was made public, was an unfortunately glorious vindication of misogynists’ worldview.

In a Radix podcast following the release of the “Access Hollywood” tape, Richard Spencer said referring to Trump’s behavior as sexual assault was “ridiculous” and “puritanical.”  The white supremacist added: “At some part of every woman’s soul, they want to be taken by a strong man.”

RooshV echoed his sentiments after the election. “I’m in a state of exuberance that we have a President who rates women on a 1-10 scale in the same way that we do,” he wrote on his website, “and evaluates women by their appearance and feminine attitude. We may have to institute a new feature called ‘Would Trump bang?’ to signify the importance of feminine beauty ideals…”

Just as white supremacists, anti-Semites and Islamophobes have been undeniably emboldened by the Trump administration’s rhetoric and policies, it seems clear that misogynist extremists feel validated and empowered by the ascendance of a man who they believe views women through the same reductive lens—as sex objects without agency and humanity, as faithful but lesser helpmeets or as harpies coming to steal their power.

As revealed in an April 2018 analysis published by the National Academies of Science, Trump’s election was also a reflection of the dread that some white men seem to feel about their place in the world. In the wake of eight years of relatively progressive social policies under America’s first black president, and faced with the prospect of the first female president, white men voted overwhelmingly for Trump—someone who has made no secret of his disdain for non-whites and women. At least some of these voters presumably saw Trump as a corrective, a bulwark against the fear that their privileged status as men and as white people, was at risk.

You can see this same fear reflected in white supremacists’ attitudes towards minority advancements: If a black person is doing well, it must mean a white person is suffering. Bigots of all stripes view justice as a zero-sum game.

We saw echoes of this fear at the infamous and deadly Unite the Right rally in 2017, when white supremacists took to the streets of Charlottesville to recount their many grievances as white men and announce to a horrified nation that “Jews will not replace us.” In its wake, the alt-right trumpeted a new era of “white civil rights,” appealing to white men’s sense of encroaching disenfranchisement. A similar paranoia underpins MRA claims that feminism is a ploy to render men irrelevant.

These entirely imaginary threats are ideal recruiting tools for the unholy alliance of incels, MRAs, PUAs and white supremacists—and serves as a combustible prologue to violence against Jewish, Muslim and black communities and women. We’ve already witnessed the deadly consequences far too many times.

Understanding Christian Nationalism: Is the Constitution in Trouble?