A New Look at the Expanded Lives of Nineteenth-Century Women - Ms. Magazine
Skip to content

In her Ms. blog on the groundbreaking exhibit “Women Artists in Paris, 1850-1900,” Bridget Quinn did a fine job outlining some of its strengths and flaws. (Most recently at the Clark Art Institute in Williamstown, Massachusetts, it features 90 works by 37 women artists from Europe and America.)  However, I think there is more to the story.

At its best, what makes this exhibit so exciting is not only the many compelling images, but also the way it highlights the gender stereotypes nineteenth-century women had to confront as artists. It also illuminates the extent to which they were successfully able to transcend those social limits and constraints.

Women artists were often considered inferior by male artists and critics and seen as limited in their abilities and imagination. It was often thought the women were best suited to paint certain subjects—flowers, friends and family, afternoon teas, portraits, scenes of motherhood, childhood, domesticity—and many of the paintings selected for the exhibit do fall into these categories. As the exhibit’s catalog reminds us, images of “jeunes filles,” young women between the ages of adolescence and adulthood, often mirrored a culture where women were limited by “constraints of good breeding and the shackles of morality.”

But it seems to me that there is more to the historical story. Nineteenth-century women in America and Europe were beginning to experience what they knew as the “modern world” in significantly modern ways. Women’s lives were dramatically changing during this time period—not only among the middle and upper class, but also in the working class.

As I wrote in my book Women and the Machine: Representations From the Spinning Wheel to the Electronic Age, women were gaining new freedoms by being able to ride newly designed women’s bicycles in Europe and America, and new bicycling clothes made it easier for women to ride. Some women were even riding the much heavier velocipedes: American women rode in clubs and riding schools; in France, women took their velocipedes outdoors on the boulevards of Paris.

As Brooklyn-born British cyclist Lilias Campbell Davidson wrote in her 1896 Handbook for Women Cyclists, cycling would open up new worlds for women whose “constricted existence” and amusements were often confined to going to the theatre, concerts and accepting invitations for polite visits—and, she added, cycling would also be liberating for women not of the leisure class who might find their lives “dull and monotonous.”

Cycling became a way for women to venture out of the confines of the home, exercise and go into the countryside. (In America, they could also go out unchaperoned.) Women cyclists began abandoning their corsets and petticoats and engaged in “dress reform”—wearing split skirts and baggy, trouser-like outfits, tied or fastened beneath the knee, which were sometimes called “knickerbockers.”

A few intrepid women in France and Belgium even participated in races—in 1868, the French periodical Le Monde Illustré published a story and illustration of women participating in a velocipede race in Bordeaux. (Both were republished in America’s Harper’s Weekly, with an intriguing change: the women’s exposed legs and thighs were discretely covered in undergarments in the American illustration.) 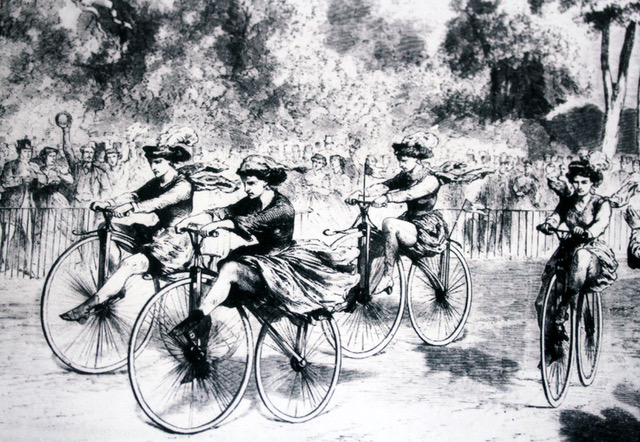 There were nineteenth-century images that reminded us of the important impact of bicycles on women’s lives, and how riding these machines helped women display their own sense of freedom and determination. French male artist Jean Beraud’s painting “The Chalet du Bicycle in the Bois de Boulogne” depicts women cyclists with their safety bicycles and cycling clothes. Photographs of the period also revealed the wider world open to women: Famed French scientist Marie Curie was photographed alongside her husband Pierre with their bicycles on their honeymoon, and American suffragist Frances E. Willard was photographed with the bicycle she named Gladys.

One intriguing exception, though, is the Marianne Stokes’ 1890 painting “The Passing Train,” in which a young woman in a red cloak stands looking pensively at a steam train passing in the distance, clouded in smoke.  Steam railroads, introduced in the nineteenth century, offered new, faster ways to travel and new vistas. For the young woman in the painting, perhaps this mechanized mode of transportation suggests the possibility of an expanded life.

The exhibit also includes a few images by women artists of women harvesters and laundresses—but it would be helpful for the exhibit’s signage to give more of the story of women’s work of the time. Nineteenth-century European and American working-class women had long been working in textile and paper mills and using sewing machines at home and in sweatshops; by the turn of the twentieth century, wealthier women were beginning to drive new steam, electric and gas-engine automobiles. Leaving the confines of their homes, middle-class American and European women were also doing what was considered “respectable” work—such as using newly invented typewriters for secretarial work in offices.

Here’s another proviso: the catalog, including the essay by Vibeke Waalann Hansen “Female Artists in the Nordic Countries: Training and Professionalization,” does refer to the impact of industrialization and the fight for universal suffrage, and also has an illustration of the painting “From the Early Days of the Women’s Suffrage Movement”  (1891-97) by Danish artist Marie Luplau, which was on view in the exhibit’s previous venues. Still, it would have been useful to have a broader picture of how women’s work was changing in these years.

Overall, though—and I want to emphasize this—the exhibit, with its astonishing collection of works, remains a very remarkable and exciting achievement. By letting us engage with so many very talented women artists, many of whom—besides artists like Mary Cassatt, Berthe Morisot and Paula Modersohn-Becker—are not widely known, is a huge treat. Working within their socially-imposed confines, these women managed to go well beyond the limits imposed on them.

In the “Jeunes Filles” section of the show is the iconic painting “Echo,” by Finnish artist Ellen Thesleff. Here, in the pink light of dawn, a young woman stands with her mouth wide open, testing out—and discovering—her own identity, her own voice. Works like these from the many artists in the exhibit lend subtle insights into women’s lives—and are a reminder of how much female artists have brought to the world of art.

Dr. Julie Wosk is Professor Emerita of Humanities at the State University of New York, Maritime College in New York City. She is the author of several books on gender, science, and technology—including My Fair Ladies: Female Robots, Androids and Other Artificial Eves and Women and the Machine: Representations From the Spinning Wheel to the Electronic Age.