How 60 Women and 11,000 Donors Brought the Stories in Amanda Palmer's #MeToo Anthem to Life - Ms. Magazine
Skip to content

October 5 marked the one-year anniversary of an explosive New York Times exposé in which women in the entertainment industry who had suffered for years in silence finally came together and forward to detail Hollywood mogul Harvey Weinstein’s serial sexual abuse and harassment. To mark the occasion, Dresden Dolls co-founder Amanda Palmer released the chilling and powerful music video for “Mr. Weinstein Will See You Now,” her #MeToo anthem.

(This video is NSFW and may be triggering.)

Months ago, in response to all the sexual assault stories in the news, Palmer and Jasmine Power co-wrote the song as a symbol of their solidarity with all survivors, donating all of the profits to the Times Up movement demanding accountability for sexual abuse in the entertainment industry.

“Your seven hundredth bedroom, the waiter brings the bill, you came here dressed for battle, you knew damn well,” the powerful lyrics begin. “Won’t have you near me, not at any cost. You knew this script. Run now, girl, run.”

The large gap in power between men who control the entertainment industry and the women who are trying to rise up within it fueled Weinstein’s abuse, which was regarded as an “open secret” for decades within Hollywood circles but never impacted his career. Instead, the women who bore the weight of his abuse and harassment faced threats and the risk of losing everything if they dared to speak out.

That lack of accountability is at the core of the song’s lyrics—and Palmer’s frustrations, which drove her to write them.

“Here’s the thing,” Palmer told Ms. “This just isn’t what I want to be doing right now. That’s the hard thing about being an artist and a feminist: I feel so stuck sometimes. I’d rather write about a million other subjects than abortion, and feminism, and goddamned Harvey Weinstein. But if every female artist made that choice, where would we be? If I don’t, who will? So fuck it. I’m all in. We don’t get to pick, we mostly need to respond, react and do our jobs—as those with loud voices—for those who are strapped down and voiceless.” 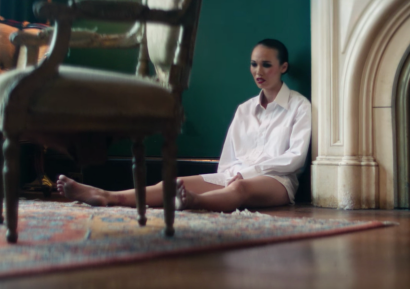 The music video for Palmer and Power’s song, directed by Noemie Lafrance, is as jarring and uncomfortable as it is pivotal and important. “How does one talk about rape, or even harder, illustrate it in a music video?” Lafrance said in a blog announcing the video. “It is too painful of a subject, and in many ways a taboo subject. What inspired me about the song is that it dared talking about rape in all of its different shades of grey. There is a line in the song that particularly moved me: ‘…let’s get this over with’ because it explores the fine lines of coercion. I felt that in the context of the Weinstein story it encapsulated the real sadness in this for all parties. I wanted the video to reflect that and be about the sadness, rather than the atrocity.”

The video is also indicative of its particular historical context: All told, 60 women helped bring the #MeToo anthem to life, echoing the collective power of the viral movement to end sexual harassment and assault that was re-invigorated after Weinstein was exposed. The video was also quite literally made possible by grassroots support in the form of donations of as little as $3 by over 11,000 people on the crowdfunding site Patreon.

“I think it’s an important part of this story to remind people that this project was crowdfunded,” Palmer told Ms. “That fact seems to have gotten lost in the shuffle, because people just assume that art and videos like this magically materialize with magical money from some magical source. Nothing could be more off base. Videos like this make no profit—their collective dollars went to pay for the crew, the cast, the rental, the cameras, everything you see. And that’s never the interesting part of the story to people, but I think it’s fucking revolutionary. How else on earth could a project like this ever happen? No record label in hell would have ever supported an idea like this.”

The video, in which women in a single hotel room depict sexual violence through an array of visual metaphors, also makes raw the now-commonplace notion of women sharing some of their most private moments for the sake of building a movement for their own dignity.

“The rapes and assaults being discussed as topics-du-jour in the media are simultaneously empowering women but also forcing us to relive and hash over the worst moments in our lives, our worst traumas, in front of people we don’t know,” Palmer wrote on her website. “It has come to this. In order to effect change, we are having to expose our darkest pain in public forums. On the internet. In newspapers. In the streets. In the senate, in front of hundreds of millions of people watching. It seems infinitely complicated to address these issues when they’re already so over-saturated and raw. How to not make things worse? How can we express ourselves and our righteous anger in our own terms, on our own dime, in our own time? That’s what I wanted to do with this video. Take it back.”

Power, who also appears in the music video, hopes that the video can help sustain the movement that has exploded since the Weinstein expose was printed. “As we directed the chorus members through our song chorus, I felt this overwhelming emotion come over me as I gazed into the eyes of each and every woman singing along,” she said. “There were moments while watching the monitors where I felt shudders of pain and sparks of excitement run through my entire body. The day felt powerful, dark, fearless and then light when I would respond to a grateful smile of another woman on set, as she would say ‘thank you for writing this.’ I hope my children will watch this video one day and be relieved that times have changed.”

“We rented the space from an Episcopalian church,” Palmer added, “which felt poetic to me, having been raised as a little choir girl in that lineage. We were worried for a minute that the minister—who was a woman—was about to shut down the production, because she was looking at our outdoor warm-up from across the street and looking concerned. Then she came over to the set, watched what we were filming, and asked if we would please come back to screen the finished video for all the women of her congregation. Women are rising up, everywhere. Change is happening at every level.” 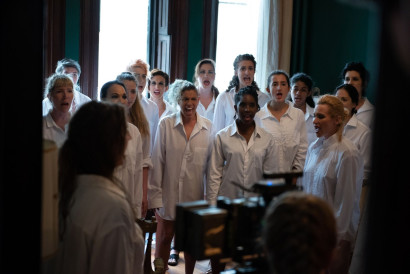 Women coming together to create something powerful and lift each other up was Palmer’s main goal, one she achieved just by reaching out for support and which extended past funding and into production. The 60 women who commuted to Brooklyn, New York to create the personal, intimate music video were not professionals. Most had not even acted or performed before. That truth makes the video even more raw and vulnerable.

“For an entire day, a congregation of women worked together to create a collective battle-cry response to this moment in time,” Palmer told Ms. “Working on this project fundamentally changed me inside. The act of running, sweating, laughing and filming with this group of powerful, determined and shamelessly naked women was a stark reminder of what we are capable of doing when we join forces, roll up our sleeves, take off our masks and create.”

That act of creation was similarly empowering for the women who worked alongside Palmer in production. “We didn’t lip sync,” revealed Alex Woodhouse. “We sang our fucking guts out. The energy in the room was palpable and radiant—strong enough to move fear and shatter the emotional entrenchment, the forced compartmentalization and the shame. This wasn’t just a video production. This was change happening at the most fundamental level.”

“Sweating and screaming and running and repeating carved through parts of me that have been stagnated and congealed for ages,” Vie I. Paula, who is depicted in the video, said in an announcement on Palmer’s Patreon page. “Trauma runs deep in this body. So does connection and creation. I bonded and felt and lived. Since the shoot I’ve written new songs. I’ve cried, a lot. I’ve made choices. I’ve changed. Healing and integration are happening.”

“Through the tears, I sang as loud as I could for all women across time,” Hanna-lee Sakakibara shared. “What a chilling, moving and oh, so, empowering experience. We stand strong, together.”

Many of these women felt the video helped them fight back in a culture that often leaves women feeling powerless. “Choosing to get naked on camera is always a big happy ‘fuck you’ to the horrific ‘purity culture’ I was raised in, which pits women against each other and shames them for virtually everything,” shared Miriam Pultro.

Bex Odorisio summed it up most concisely: “Women are powerful,” she shared. “Women working together are unstoppable.”

Palmer wants survivors to share the video with those they know who might need it, because she feels that is the best way to heal. “To me, the greatest sign of success for a project like this is to see feminists and assault survivors passing it around by hand, sharing it like medicine,” she told Ms. “That’s when I know that we’ve struck an important chord, and that’s more meaningful to me than getting ink in the New York Times.”

Palmer also wants her work to help make the voices of survivors heard—and inspire more to speak up. When survivors share the video, she hopes they also share their own stories. “I think one of the most important political actions people can take right now is sharing stories,” she told Ms. “No matter how small or vague or insignificant the story seems, this is the time to break the glass ceiling of shame. The stories becoming unearthed are going to be the collective bunch of balloons that lift us off this battlefield and into a better world that has space to contain all of this. The power of the #MeToo movement is that stories are kinetic, and there’s a great momentum going right now which will become more powerful with every little story that is added.”