At the inaugural Maverick Live Summit in Los Angeles, teens took the stage to celebrate the new app’s intent to empower young girls to use their voices—and shared honest stories about their paths to incredible accomplishments. From being on “Grown-ish” to being the first African-American woman ever to qualify for a U.S. Olympic speed skating team, the passionate young women who gathered in Los Angeles for the summit showed the crowd of teens that anything is possible and encouraged them to be creative and empowered.

Collectively and individually they told each other and the crowd: “Take risks! Dream big. Let your voice be heard!” 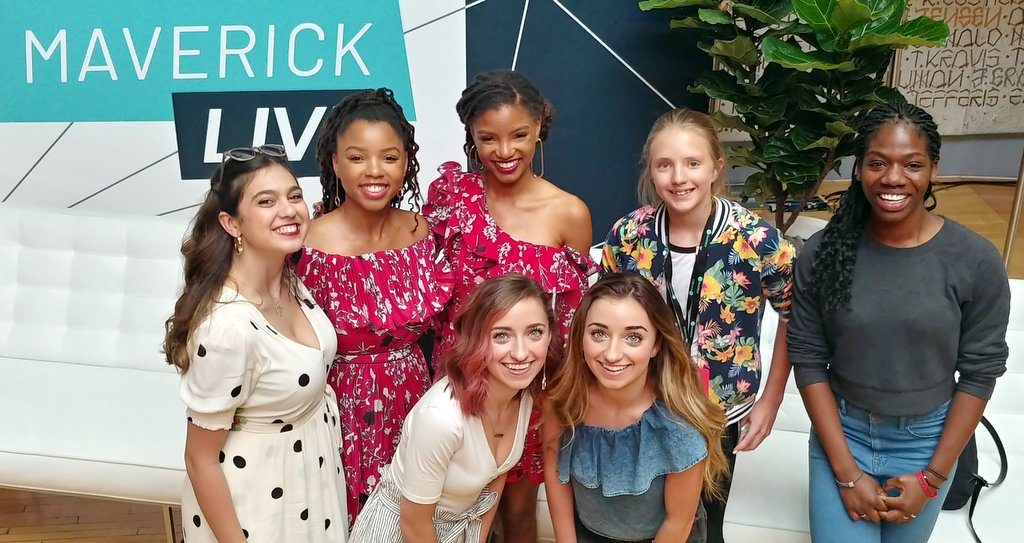 Listening to the young women speak about their struggles, about moving from surviving to thriving, I realized that they had plenty to teach me and the other adults who attended in support and as mentors. As a 50-year-old entrepreneur, I was impressed to see these teens sharing lessons I am often still working on.

Here are my five favorite takeaways from the day. I hope their ability to stay the course inspires you to continue working daily in the direction of your aspirations.

#1: We are better together.

Super-powered sister duo Chloe x Halle have undergone a transformation—from being two girls who loved making music in their living room to the faces of a YouTube channel with over 79 million views and nearly one million subscribers and a nomination for Best New Artist on MTV Video Music Awards 2018. They have now performed with Beyoncé and created the theme song for “Grown-ish,” a TV show in which they also play twin characters.

People of all ages worry if their work will be good enough: Chloe x Halle have a built in team as sisters and with their extended family, and their secret to success is to “express yourself truthfully and together!” Make sure to reach out to others and find your team to encourage and sustain you.

#2: Stand up for yourself and never give up.

Maame Biney is an Olympian with a big smile and incredible tenacity who moved to the United States from Accra, Ghana when she was five years old. When she found speed skating shortly after, she immediately fell in love—and she never stopped trying to get better.

Her determination to battle her way through many obstacles sets an example of the focus that is needed to reach any goal, whether or not it has Olympic proportions.

The other injustices Biney has overcome have also fueled her fight to succeed. She spoke candidly about a coach who called her “fat” at the summit, and urged everyone in the crowd to create their own mold. (In a moment of raw honesty, admitted that even she is “still learning how to love myself.”)

“I was the only African American on a team and surrounded by Asian teammates,” she explained. “I am different, but so what. I am black. I have curly hair. My legs are bigger than other girls and because of that I am stronger than them. I overcame that.”

#3: Dress to impress yourself.

Daunnette Reyome is a Native American Teen Vogue model who wants people to understand the cultural and spiritual significance of wearing a headdress. In her culture, “you have to earn the right to wear an eagle feather,” and she noted that “I feel powerful when I wear it—more confident, and more connected to my culture.”

Although Reyome resides on the UmoNHon Indian reservation now, she was not raised on one, and wants more people to understand that not all Native Americans live on them. She likes to play basketball and be with friends.

Reyome aspires to be a culture hero, “someone who has pride in their own culture.” The confidence and optimism that Reyome exudes is a key to her success. She believes in herself and that she can make a difference which is what most of us want for ourselves no matter our age.

“I want to fill my life with experiences that many little Indian girls did not have the chance to do,” she told the crowd. “I want to show others that it is okay to believe in their dreams.”

According to 15-year-old Hannah Alper, there is no such thing as “too young.” She has been an advocate for issues she cares about for years—working with the World Wildlife Federation, school groups and Canadian policy makers and even delivering TED talks. Alper is a speaker, author, role model and high school freshman who wants everyone to see “we are all empowered to make a difference in our communities and in the world.”

“What are you fighting for?” Alper asked from the stage. She then laid out her formula for making it happen: the issue plus your gift will create change. (What is your gift? Alper will tell you “whatever you are good at can make a difference. The issues in the world seem overwhelming but stay grounded and you can ‘be the change.’”)

#5: Find humor in the darkness.

Ruby Karp’s advice for girls and young women? “Social media is toxic, pick only partners who are supportive and don’t take yourself so seriously… Control who you are and what you surround yourself with.”

In a spoken word piece at the summit, Ruby Karp talked about how high school, like life, can be awkward. In her book, Earth Hates Me, as well as in person, Karp shows that smart is funny, and that it is okay to “show your weirdest self, say things that make you uncomfortable and have hard conversations.”