In one year’s time, the Trump administration went from acknowledging the struggles of intersex people to pretending they don’t exist.

On October 26, 2017, a year ago today, the Trump Administration issued a press release in recognition of intersex awareness day which acknowledged that intersex people—those born with a unique combination of what we perceive as male and female sex characteristics—“face violence, discrimination, harassment and persecution on account of their sex characteristics.” Intersex people around the country and the world welcomed this acknowledgement; it marked one more step in the right direction, and it echoed the first show of support for Intersex Awareness Day by the Obama administration in 2016.

But now, as reported in The New York Times, the Trump administration is proposing a legal definition of sex that is allegedly “clear, grounded in science, objective and administrable”—but based on the person’s genitals at birth. The Trump administration appears confused, or, worse, unapologetically ignorant, about the complexities of sex and gender. They cannot, on one hand, acknowledge and support intersex people and now pretend they do not exist.

I’m a medical sociologist who has spent the last decade studying how intersex identities are experienced and contested in the U.S. I’ve collaborated on research projects with medical doctors with the goal of improving medical care; I serve as the Board President of interACT: Advocates for Intersex Youth; and I’m also the author of the multi-award winning book Contesting Intersex: The Dubious Diagnosis, which documents how the intersex diagnosis was reinvented as a disorder of sex development.

This work is what makes me certain that the Trump administration’s proposal would put intersex people in danger. It would sanction discrimination against intersex folks—and make them invisible.

Before any proposals move forward, it is important for policy makers and the public to more fully understand the complexities of sex and gender. To begin with, sex and gender are not interchangeable labels. Sex is a term meant to describe the physical body; it is an umbrella descriptor intended to classify our external genitalia, sex chromosomes and internal reproductive structures. Gender, in its simplest definition, refers instead to a dynamic part of self-identity based on societally defined understandings of masculinity and femininity characteristics.

One’s sex doesn’t neatly predict their gender. If one is born with a penis, it doesn’t automatically mean they will be masculine; if one is born with a vagina, it doesn’t mean they will be feminine. Sex and gender may often appear correlated, but that correlation is not hard-wired into human bodies. Instead, a person’s gender is the product of many complicated factors including interactional expectations and socialization processes.

Biologist Anne Fausto-Sterling first critiqued the classification of people as either male or female by pointing to the natural occurrence of intersex in the population. Sociocultural scholars have for decades now also understood that gender is more than just an identity characteristic: Sociologist Barbara Risman, a Past Vice-President of the American Sociological Association, has encouraged all of us to think of gender as a complex structural system with advantages and challenges at the individual, interactional and institutional levels of society.

Men are often viewed as loud and tough, while women are seen as soft-spoken and weak. But these gender characteristics about volume and strength capture our societal definitions of masculinity and femininity, rather than our biological predisposition. We determine them. They do not determine us. And the combination of sex and gender which shapes our lives, and our identities, should never serve as excuses for others to discriminate against us or deny us our dignity.

The Trump administration’s proposed legal definition of sex is hardly the way to recognize, validate or serve the up to 2 percent of the U.S. population that is born intersex. As we once again mark Intersex Awareness Day, we must commit to fight against the un-scientific and flagrantly oppressive policies they’re trying to use to erase trans, gender non-conforming and intersex people.

Georgiann Davis, Ph.D., is an assistant professor of sociology at University of Nevada, Las Vegas. Her research is nestled at the intersection of sociology of diagnosis and gender theories. She is currently writing a book that tells the story of how intersex became a contested disorder of sex development.

The Ms. Q&A: Valerie Hudson on Placing Women’s Rights at the Core of Foreign Policy 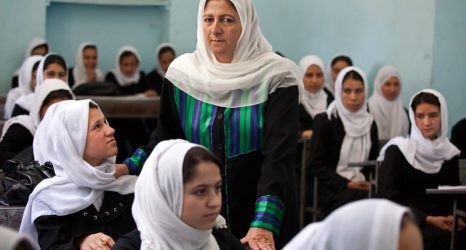