The Future Coalition, a network and community of youth-led organizations, and March On, the feminist collective formed by Women’s March organizers from across the country, are calling on young people to take to the streets on election day and march to the polls. 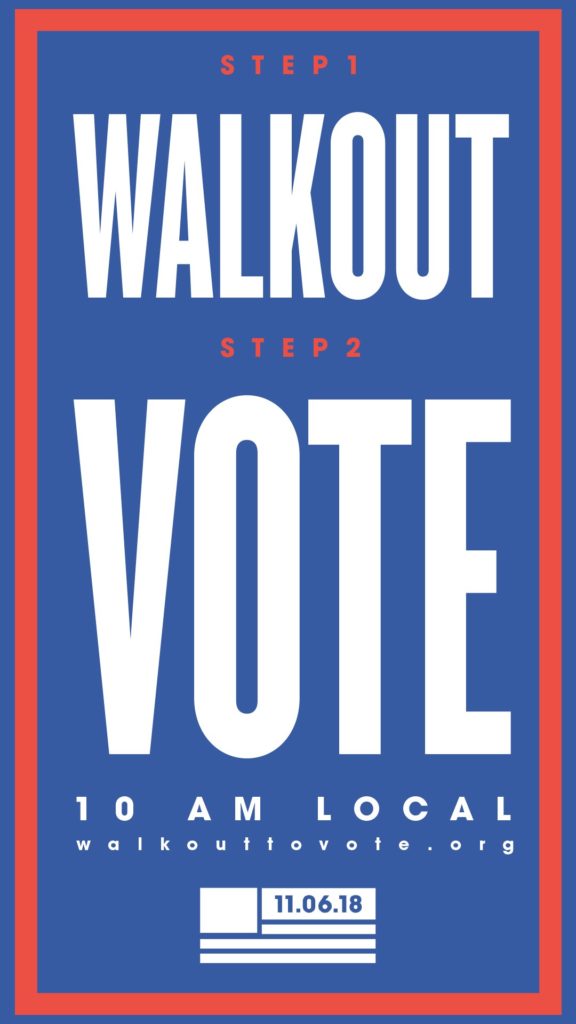 The #WalkOutToVote campaign is encouraging young voters and future voters to walk out of their high school and college classrooms at 10 a.m. local time and head to their local polling place, where those who are of voting age will be cheered on by those too young to cast a ballot as they head inside.

“I think when we look at history, a lot of the biggest movements that make a change have been surrounding voting,” 18-year-old Katie Eder, the Executive Director of anti-gun violence organization 50 Miles More and a Future Coalition leader based in Wisconsin, told Ms. “We often take it for granted how lucky we are to have a voice and we really do, we sometimes feel helpless when we look at the media and all the negative things happening in the world, but voting is the way we can have a direct impact. Our collective votes really do matter, and we need to take that initiative and make sure our country is reflective of the citizens that live here. Our vote is so important as a single person and as a generation, because it’s our way of making this country a place we want to live in and say that we’re from.”

Before the campaign’s official launch earlier this month, 500 student-led election day events had already been organized across the country supporting the effort. Young people nationwide are being encouraged to post on Twitter and Instagram with campaign graphics and share why they’re voting with the walkout hashtag, and to call on their friends to join them.

“Generations before us have not realized the impact of their actions on the country and the world,” Eder added, “and we are now seeing climate change, gun violence, education systems and prison systems failing, and we are realizing that we are going to be left with a world thats really hard to live in and we might not even be able to live in! We as young people need to recognize that this is a pivotal time and we have an opportunity to band together and create a future that we want. We need to get involved and stand up for what we believe in. It is time to advocate for our generation and the generations after us. It’s time we take our own future into our own hands.”

The Future Coalition’s inaugural initiative has two ambition goals. This November, they want to see more young people than ever before in American vote in the midterm elections. As students empty out of their classrooms to make that happen, walkout organizers also hope that their absences serve as  reminders of the barriers faced by voters across the country—such as those shared by high-school students and low-wage workers, who don’t always have control over their own schedules and can’t always abide by the hours of their local polling place. Eventually, the Coalition hopes national leaders will name election day a federal holiday, expanding the potential for people of all ages to participate in elections moving forward.

Perhaps the most inspiring part of the #WalkOutToVote campaign is the amount of young activists who have come together to make it possible. The Future Coalition is composed of organizations centered in different communities, tackling a myriad of issues—and on election day, they’re hoping to prove that young people are uniﬁed in their demand for change.

“We recognize that we are more impactful when we collaborate and join forces,” Eder explained to Ms., “and everyone that we’ve talked to is excited about that. We’re at a really special time in this country and I think we are able to make such a change because no matter what each individual organization stands for, we all believe that young people need to go vote, and we are making that change together.”

In North Carolina, Black Voters’ Mail-In Ballots Far More Likely to Be Rejected Than Any Other Race

A Little Fannie Lou: Why Black Women Run for Office