In the wake of Nassar’s trial, in which hundreds of survivors came forward to testify to his decades-long patterns of serial sexual abuse of women and girls, Tasha and her sister Jordan, a former U.S. National Team member, are demanding justice beyond his sentencing of up to 175 years in prison.

“For a long time, USA Gymnastics turned a blind eye to allegations of sexual assault by Larry Nassar and failed to protect athletes,” Jordan said, holding back tears. “This is why I am filing a lawsuit against USA Gymnastics and others who enabled this abuse. The toxic culture at USA Gymnastics created an environment where we are afraid to come forward… USA Gymnastics and USOC failed as institutions in the responsibility to protect young people participating in it’s programs, instead prioritizing winning and protecting themselves.”

Nassar—who was the USAG team doctor as well as a doctor serving the campus population at Michigan State University, where gymnasts trained—sexually assaulted hundreds of women and girls under the guise that he was giving them medical treatment. After over 30 years of abuse, Nassar was sentenced for his egregious crimes—and in the aftermath of his reckoning, which shook the nation and the sporting world, it has become clear that many USAG and USOC officials not only knew about the abuse, but attempted to cover it up and protect him from accountability.

Leaders across the Olympics stepped down and faced pushback after hundreds of Nassar’s survivors testified publicly during his trial. Steve Penny, the former head of USAG, was also recently arrested for tampering with evidence in the Nassar case; in 2016, when they were aware of his actions, USAG publicly praised him. When he and the organization parted ways, USAG gave Penny a $1 million severance package.

Mary Bono ultimately became the USAG president, but her appointment was far from a fresh start for USAG: She had worked with the organization previously as part of their legal team, and was implicated in the cover-up culture that protected Nassar in the first place. Just days after Bono’s appointment, she stepped down.

As USAG looks to place a new CEO and president, Tasha and Jordan are demanding the organization finally commits to changing course. Their suit marks the first of any Nassar survivors under the Racketeer Influenced and Corrupt Organizations Act; their claim includes allegations that USAG kept a secret file of sexual assault complaints filed against him and impugns the organization for fostering a culture where young girls did not feel they could speak up about abuse they experienced.

“My hope is that through this lawsuit, we can get to the truth and hold USA Gymnastics and the U.S. Olympic Committee accountable for its failure to care and protect gymnasts like me from being sexually abused,” Tasha said. “It is time for them to implement real institutional change that will destroy the culture of abuse that allowed this to happen to so many gymnasts.” She told reporters that she would like to see a survivor lead USAG and give former athletes like her, who were directly impacted by Nassar, a hand in shaping its future.

The Schwikert sisters each recently tweeted their own #MeToo stories, breaking their silence around their experiences as Olympic gymnasts. Their lawsuit marks another step in their determined fight to shift norms in their own sport and, in turn, across Olympic organizations.

“[They] have struggled to make this decision about whether or not they were going to go public about something that is so intensely personal,” attorney Michelle Simpson Tuegel said Monday. “Really, what sparked and led them to the point where they are here in front of you here today is what we’ve seen in the past couple weeks—a failure in leadership, a failure to choose leadership that’s going to create lasting change and a failure to change the culture of silence that led to the abuse that these women had to endure as little girls.”

“I love gymnastics,” Tasha said, “but its culture based on fear, silence and intimidation has to end.”

After months of grappling with the decision, I have decided to come forward as a victim of Larry Nassar. I want to join my former teammates and fellow survivors to help enact REAL change at @USAGym and @TeamUSA. #MeToo

I don’t want another child to go through what I went through. That’s why, today I am saying #MeToo and joining fellow gymnasts to help ensure another Larry Nassar can never happen again. #TimesUp @USAGym and @TeamUSA

“I’m done,” Tasha announced Monday, revealing to reporters that USAG would force gymnasts to give on-camera interviews that portrayed their experiences positively even when they had come forward to officials with complaints. “I’m tired of pretending like it was this glamorous career where nothing bad happened, and everyone’s happy. It was awful. For so long, because of the training of pretending nothing happened, I was able to submerge these memories and what happened to me with Larry and the nine year eating disorder I developed as an elite gymnast which took two years of therapy to overcome, you kind of stuff them down and don’t talk about them, because it’s easier to move on with life and not discuss them.”

Tasha and Jordan both had storied careers as USAG athletes, but they don’t feel that those experiences and opportunities were worth the price: their emotional and physical well-being. It isn’t just the rampant sexual abuse of gymnasts and other athletes that have compelled them to speak out—it’s a system they view as broken, one which reduces athletes to trophies and scorecards. “Despite the fact that athletes are departing the sport with medals,” Tasha said, “they are also leaving the sport with depression, severe eating disorders, an inability to communicate their emotions and an inability to have meaningful relationships.”

“I want to see change within the sport I love,” Jordan added, “and believe that the culture of gymnastics should focus on the physical and emotional well-being of gymnasts, instill positive body image and create an environment where athletes feel they can speak up and be heard.”

The transformation they seek, however, is still predicated on justice for Nassar’s victims—and it’s about ensuring that the scandal that emerged from his abuse is the last of its kind. “If gymnasts feel like they can’t speak up about their own injuries, about their own bodies, about the fact that they’re hungry,” Tasha asserted at Monday’s press conference, “all of those things made it so no one could speak up about Larry. No one else would be allowed to do that if gymnasts felt they could speak up and communicate.”

The Schwikert sisters aren’t the only women rising up after Nassar to demand such changes. Olympic gymnast Aly Raisman is also suing Olympic organizations for failing to stop Nassar, and students at Michigan State organized after his trial demanding their own leadership be held accountable for his actions. Legislation sponsored by Sen. Dianne Feinstein and signed into law after Nassar’s trial amends three different policies in order to make everyone within sports organizations like the Olympics mandatory reporters for child sexual abuse, provide monetary damages to victims, extend the statute of limitations on child sex abuse cases and mandate abuse prevention education by the U.S. Center for SafeSport.

But the sisters hope that actions by survivors like them will not only fuel change from the top-down, but spur a movement demanding it from the bottom-up. Club and collegiate gymnasts, and athletes at every level, look up to Olympians—and through their suit, Tasha and Jordan hope to encourage all of them to continue pursuing their passions and demanding dignity and justice while they compete. For Jordan, who now works as a gymnastics coach, that call to action is both intensely personal and political in nature.

“For so long it was like [coaches] believed that we were winning medals and having success by overtraining, and the negative and toxic culture that we were in for so long,” Tasha explained, “so they believed it was the only way to win. That mindset and idea needs to change, not just at the elite level, but everywhere in America—at all of the gyms, clubs in the United States. It starts at the top, it starts at the center where they Olympic gymnasts are training and it flows down, right? Because we’re all looking to those Olympic gymnasts, saying ‘we want to be like you, how are you guys doing it?’ Well, if you’re watching them succeed and earn Olympic medals by overtraining, by the abuse, by endorsing eating disorders—it all trickles down throughout the country.”

The day after Tasha and Jordan filed their lawsuit, the USAG women’s team won their sixth consecutive world title, taking first in the Worlds competition. Their win flooded headlines, but fewer outlets covered Tasha and Jordan’s announcement. More than anything, this stark contrast in conversations showed the urgency and importance of their mission: Until sports leaders and fans alike decides they value the lives of young women more than they value winning medals, the abusive, damaging culture that enabled Larry Nassar and others like him won’t change.

Video of the entire press conference is available here. 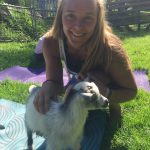 The Courts May Be Closed—But for Sexual Abuse Victims, the Wheels of Justice Are Still Turning