Ms. Smith Goes to Washington: Inside the Modern Send-Up of a Classic Political Story - Ms. Magazine
Skip to content

Hundreds of feminists, seated in long wooden benches under the vaulted ceilings of the Los Angeles City Council Chambers, bore witness last week to a historical revisitation fit for the current political moment: a gender-bending update on the classic 1939 film Mr. Smith Goes to Washington. 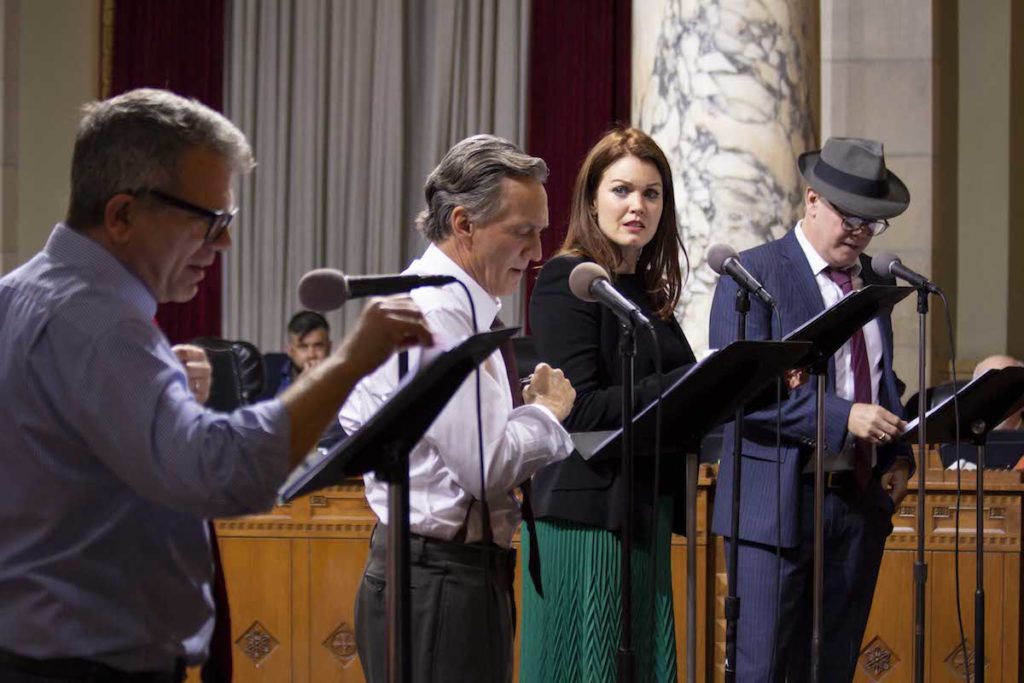 Director Stephen Sachs adapted the classic screenplay to feature a female Senator in the titular role and include discussions of gender in politics through the lens of corruption in Washington post-World War II. Before the one-night celebrity reading of Ms. Smith Goes to Washington began—hosted by The Fountain Theatre at a part of their 2019 FemFest—Sachs called for ongoing partnerships between city governments and local artists.

“We believe that theater,” Sachs explained, “can be a trigger for social action.” The cast—including Joshua Malina (Scandal, The West Wing), Jeff Perry (Scandal), Sam Waterston (Law & Order, Grace and Frankie) and Bellamy Young (Scandal)—helped him prove that night just how powerful that vision can be. 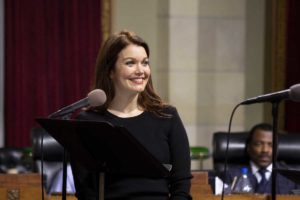 Each member shone in their roles, but some of the most poignant moments of the evening were delivered out of the mouths of babes—specifically, 16-year-old Aurelia Myers. Myers played a young girl who inspires her father, the Governor, to appoint Ms. Smith to the Senate, disobeying the corrupt boss of a political machine in their un-named state.

At one moment, Myers made space for levity while also calling to attention the gender disparity in the Senate chamber—where, even in 2019, women hold only a quarter of seats. “Dad,” she exclaimed to laughter from the audience, “this is 1939, not the Dark Ages!”

Sachs avoided naming a specific state or political party in his adaptation, and in maintaining the story’s 1939 setting, the performance was able to tow the line between a night of entertainment and a rallying cry. But in the shadows of the City Council chambers’ marble arches, the evening felt like a celebration of the feminists currently fighting for equality in Washington—just like Ms. Smith.

“It is the arts that remind us of our common humanity,” Councilmember Mitch O’Farrell (CA-13), an event sponsor, said when he opened the reading—adding that, when the division and disappointments defining Capitol Hill today become history, “we are going to owe the arts and women a great deal.”

During Myers’ plea to her father, she echoes that sentiment in a declaration which, no matter the era, remains revolutionary: “Sometimes the best man for a job is a woman.”

Maddy Pontz is a passionate feminist and storyteller. She’s currently a freelance writer and frequent Ms. contributor, and was previously the community engagement editor at Ms. You can find her on Twitter @MaddyPontz.