Neither Feminist Nor Christian - Ms. Magazine
Skip to content

The so-called “Christian” Right has continued to attack the LGBT community—and now, some folks who call themselves feminists are abetting them.

In late January, the Heritage Foundation hosted a panel in opposition to the Equality Act, which would add sexual identity and gender identity to the Civil Rights Acts of 1964 that currently bars discrimination based on race, color, sex, religion and national origin. One panelist was a fellow from the Heritage Foundation. The other three were women from the Women’s Liberation Front, a supposed radical feminist group that opposes transgender rights.

Like other trans-exclusionary groups, these women argue that cisgender women will somehow become unsafe if the law recognizes the rights of transgender people. Like the “Christian” right, they argue that public bathrooms will become sites of increased violence against women if trans women use them, and in 2017, they teamed up with the anti-LGBT Family Policy Alliance to fight the Obama administration’s bathroom mandate. These trans exclusionary activists, like activists on the “Christian” Right, refuse to recognize trans women as women. They insist trans women are actually men. And in service to their anti-trans bigotry, groups like these have joined forces with right-wing organizations that have long histories of opposing rights not only for lesbian, gay and bisexual people, but for all women.

The Heritage Foundation itself opposes abortion rights, the contraceptive mandate in the Affordable Care Act and equal pay; they oppose most strategies to advance civil rights and address issues of racism, ethnocentrism and xenophobia, as well as sexism and heterosexism. And even though the Southern Poverty Law Center has designated another “Christian” Right organization, the Family Research Council, an anti-LGBT hate group, it has developed a specific strategy for reaching out to potential “feminist” allies to oppose transgender rights.

What both trans-exclusionary women’s rights activists and “Christian” Right activists have in common is that they masquerade as representatives of empowering and liberating beliefs—feminism and Christianity—but are, in actuality, servants to fear and bigotry. Their willingness to join forces to oppose transgender people indicates the depth of those fears.

Trans-exclusionary women would have us believe that biological sex is binary and determinative. In their idea of patriarchy, people born female are subordinated to people born male. Since feminism is the fight to end the social hierarchy that results from biological reality, transgender folks thus represent a threat to their fight, rendering null the biological reality on which their efforts are built.

Neither biology nor sociology nor feminist theory supports this perspective. We know sex is more complicated than biology, and that it is also socially constructed through the ways we determine what sex is and who falls into which category. Gender complicates things even more by shaping how we perform the identities we are assigned or experience. And as feminists have pointed out for decades, no one experiences only one facet of identity at a time.

More than forty years ago, Audre Lorde, as a Black lesbian, wondered “which me will survive/all these liberations.” No one is ever only a woman without also having a race, sexual identity, social class and so on at the same time. These intersections shape and complicate one another within systems of social power and institutions, and these differences are not simply additive—they are confluent. They flow together and mix into something that is not simply “gender or race” or” gender plus race,” but is something new that neither gender nor race alone can account for or explain.

Trans-exclusionary women, in an attempt to address the real material consequences of sexism, therefore ultimately end up initiating a round of Oppression Olympics, a way of trying to compare and rank oppressions. As many of us know, the Oppression Olympics is a zero sum game, and the notion that acknowledging trans oppression somehow lessens the oppression of cis women forces us back into another round.

Vivian May points out in Pursuing Intersectionality, Unsettling Dominant Imaginaries that intersectional thinking must be “both/and,” which in this case provides us with a way to recognize both that people born biologically female and assigned female at birth who also identify that way and that people whose gender identity does not match their assigned gender experience oppression based on gender. We can accept both that sexism, misogyny and violence affect the material realities of cisgender women’s lives and that sexism, transphobia and violence affect the material realities of transgender, genderqueer and gender non-conforming people’s lives.

Embracing trans people and issues as a central part of feminism does not weaken feminism’s commitment to the concerns and experiences of all women across their differences. Intersectionality demands that our vision and implementation of feminism be both/and—both women who embrace the gender assigned at birth and transgender, genderqueer, gender non-conforming people, because we all suffer within patriarchy’s misogyny and violence.

Leaders on the right developed a strategy years ago to use a small group of so-called “trans exclusionary feminists” to create a rift between the LGB and the T. Trans-exclusionary activists are playing right into their hands—and fueling their larger anti-woman, anti-queer, anti-trans agenda.

Certainly, feminists can and should have disagreements. We need differing ideas to keep us sharp, to remind us of the power of our social locations to limit our understanding of the world and the necessity of the view from our social location as an important piece of the entirety of feminist movement. What we do not need is exclusion rooted in our fear that our experiences and concerns will not be taken seriously.

We do not have to play the Oppression Olympics to determine if it’s worse to be a cis woman or a trans woman. This game is counterproductive, and does exactly what the “Christian” Right hopes it will do—divide a social movement meant to take it down.

A great deal of Christian theology depends on biological essentialism and gender hierarchies; if those are disrupted, religious hierarchies that situate men over women, making wives submissive to husbands and excluding women from ordained ministry, become much more difficult to maintain. These theologies of exclusion express cultural fears and misreadings of ancient texts, all in the service of maintaining patriarchal power.

But there are other ways to read the Bible. Christian feminist interpreters see in the biblical text a gospel of radical love and inclusion. To them, diversity in all its forms is simply a facet of God’s world—and trans people, like all people, are God’s people, called to resist oppression and welcome everyone into God’s beloved community.

The partnership of the so-called “Christian” Right and so-called trans-exclusionary feminists does not lead toward liberation, inclusion or love. It certainly will not move us toward freedom for all women. Instead, it serves only bigotry, division and oppression.

That is not feminist—and it’s not Christian, either. 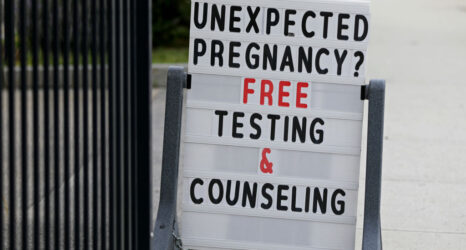