Ms. Muse is a discovery place for riotous, righteous and resonant feminist poetry that nourishes and gives voice to a rising tide of female resistance—brought to you by Ms. digital columnist Chivas Sandage.

While our leaders continue daily to cage children, take away women’s rights to control our own bodies, threaten and oppress people of color and LGBTQ folks and families, allow corporations to harm the environment and dismantle democracy—I put out a call for “love poems.”

Doing so felt potentially questionable, even inappropriate. But I started Ms. Muse just over a year ago as “an antidote to the news,” and “to fortify—and defy.” And there are many kinds of antidotes.

Writing and/or reading a love poem can be its own from of resistance. I’ve come to understand that part of this administration’s strategy against those of us paying attention is to distract us constantly and interrupt our daily lives on the most fundamental levels as a means to overwhelm, discourage and weaken us. They want us to shut down and tune out.

Reconnecting with ourselves, especially that which connects and sustains us, is its own form of resistance. Turning our attention to our relationships and eros—its joys and comforts, our longings, losses, passions and questions—is its own form of defiance.

And so I invited any poets that happened to see my call to send poems that push against the very concept of “theme,” that make diverse experiences of love visible, that might be controversial because of a pronoun, that redefine, remember or reimagine love.

The result was last month’s installment of Ms. Muse, featuring Mariahadessa Ekere Tallie. But poems continued to come in, so this month’s special installment features four more feminist poets writing and talking to Ms. about being mistaken as straight, feeling afraid to write about happiness, writing about genderless sex and imagining change—personally and politically.

Lesléa Newman has created over 70 books for readers of all ages including the poetry collections I Carry My Mother, Lovely and Still Life with Buddy and the novel-in-verse October Mourning: A Song for Matthew Shepard, which received 30 awards. She is also widely-known for her groundbreaking 1990 children’s book, Heather Has Two Mommies, as well as Sparkle Boy, which received several awards in 2018. Newman has received poetry fellowships from the National Endowment for the Arts and the Massachusetts Artists Foundation, two American Library Association Stonewall Honors and the Massachusetts Book Award. From 2008 to 2010, she served as the poet laureate of Northampton, MA.

Not only does this poem flirt openly, it “comes out” in the title. Furthermore, while the poem’s speaker wears a Madonna T-shirt (which may or may not suggest her age), the poet herself is a middle-aged woman and so the poem can also be interpreted as challenging the old taboo against older women writing about their sexuality. How has it felt to publish this poem—and read it in public?

In the moment, I took this very personally. In hindsight, I feel a little silly about doing so. Who knows what was going on in her mind/life that day? She could have been too preoccupied with any number of things to notice my charms.

In any event, it got me thinking about how often I—because of the way I express my femme-ness—am perceived as straight, and how I constantly have to decide whether or not to come out. When I read the poem aloud to an audience, it always gets chuckles and murmurs that I interpret as “I can relate to that.”

Next time I read it aloud, I think I will wear my Madonna t-shirt!

Lisa Mangini is founding editor of Paper Nautilus, a small press, and the author of Bird Watching at the End of the World (poetry) and four chapbooks of poetry and prose. Her work has appeared in McSweeney’s, Mid-American Review, Louisiana Literature, Lunch Ticket, and other publications. She earned an MFA from Southern Connecticut State University and teaches English and creative writing at Pennsylvania State University. Mangini lives in Pennsylvania’s Nittany Valley with her husband and cat.

Denouement
There is the moment, two weeks after we hear
the good news that I’ve gotten the job, and we
put a deposit on a new place, together: we stroll
around the grocery store, late, something
to do in this campus of a town that turns quiet
all summer. We need toothpaste, toilet paper,
to practice being domestic. We stand in front
of a box of bruised fruit, lifting each mango
to our noses and smelling, squeezing to check
ripeness. His face, eyes closed, is the same
breathing in this fragrance as when he sleeps,
and I know I am lucky to recognize that,
can look forward to that face any time I wake
before him, can look forward to any time.

How does it feel to write and publish a love poem at this moment in history, a particularly dark, frightening time for so many in this country? And are there ways in which this poem is notable for you personally?

It’s a real gift to have the luxury to spend time writing, to reflect on my experiences—to talk about happiness and love, of all things, at a time like this. It can feel frivolous, self-indulgent: is this how I should be spending my time when there are so many crises and urgent causes? But at the same time, art is vital; love is vital. I can be both engaged with the darkness of the world and also carve out room for celebration.

I think it can be difficult, for me especially, to write a poem that offers resolution, or that elevates a moment that is, more or less, conflict-free and feel satisfied with it. As a feminist, I have felt conflicted writing about love or my husband, concerned that some might misunderstand and not take my work as seriously—but allowing myself to write about this everyday moment of tenderness without reservation, without imbuing it with something bigger and darker, felt powerful.

Lori Desrosiers is the author of The Philosopher’s Daughter (Salmon Poetry, 2013), Sometimes I Hear the Clock Speak (Salmon Poetry, 2016) and a chapbook, Inner Sky (Glass Lyre Press, 2015). Keeping Planes in the Air will be released by Salmon Press in 2020. Her poems have appeared in New Millennium Review, Cutthroat, Peacock Journal, String Poet, Blue Fifth Review, Pirene’s Fountain, New Verse News, Mom Egg Review, and other journals and anthologies. A finalist for the Joy Harjo poetry contest and the New Millennium contest, Desrosiers’ poem “about the body” won the Liakoura poetry award from Glass Lyre Press. She earned an MFA in poetry from New England College, founded and edits Naugatuck River Review, a journal of narrative poetry, and Wordpeace.co, an online journal dedicated to social justice. Desrosiers teaches poetry in the Lesley University M.F.A. graduate program.

What inspired you to work in this way with E.E. Cummings’ poem by the same name? What were the challenges? Are there ways in which this poem is notable for you personally?

I performed several poems by e.e. cummings a couple of years ago at an exhibit of cummings’ art, and found myself transported by his poetry in a way that took my thinking (and poetry) in surprising new directions. I began to write poems inspired by cummings—either with a line from his work or after his poems, in the same vein or following a pattern—for the past year or so.

Margo Berdeshevsky, born in NYC, is author of Before the Drought (Glass Lyre Press, 2017), a finalist for the National Poetry Series. Other works include Between Soul & Stone and But a Passage in Wilderness (Sheep Meadow Press) and Beautiful Soon Enough (Fiction Collective Two). A recipient of the Robert H. Winner Award from the Poetry Society of America, her works have appeared in Poetry International, New Letters, Kenyon Review and many other journals. Also a photographer and a collagist, she often lives in Paris, and her “Letters from Paris” may be found at Poetry International.

How does it feel to write and publish this poem at this moment in history, a particularly dark, frightening time for so many in this country?

These are the direst days many of us have known. With too many reasons, often, to bear.

Lennon’s famous song begged us to imagine. Yesterday was Memorial Day in America. I tried to imagine nothing to kill or die for. No dictators. No shame.

Lesléa Newman’s poem has appeared as “Your Loss: To the Lovely Butch in Front of Me at the A&P” copyright © 2018 Lesléa Newman from Lovely by Lesléa Newman (Headmistress Press, Sequim, WA). Used by permission of the author.

Chivas Sandage is a digital columnist at Ms. and the author of Hidden Drive, a finalist for the ForeWord Book of the Year Awards in poetry. Her poems and essays have appeared in Ms., The Rumpus, Salmagundi, Southern Humanities Review and Texas Observer, among others. The Massachusetts Cultural Council awarded Sandage a 2020 artist grant for her work on a nonfiction book about the double shooting of a lesbian teenage couple in Texas. Tweet her @ChivasSandage. 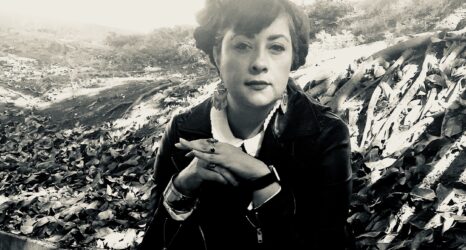 Marisol Baca: On Writing the Stories that Raised Her, Surviving 2020 and Feminism 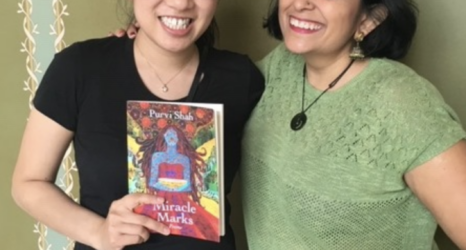