As historians Daina Ramey Berry and Kali Nicole Gross explain in their recent book, A Black Women’s History of the United States, Black women are so often marginalized in mainstream accounts of women’s history. Yet, their ideas and experiences are central to understanding the intersecting dimensions of race, gender, and class.

As Claudia Jones argued in her classic 1949 essay, Black women are uniquely positioned to address the problem of inequality. Expanding community knowledge of Black women’s history is therefore an important step in the fight for equality in the United States and abroad.

As we celebrate the historical achievements and contributions of all women, it’s important not to lose sight of the significant role Black women played in shaping our nation’s history.

The following ten books are some of my favorites, which capture the depth and richness of Black women’s history in the United States.

When and Where I Enter: The Impact of Black Women on Race and Sex in America

This pioneering study in Black feminist thought tells the story of how Black women in the United States challenged racism and sexism from the era of slavery to the 1980s. Drawing on a wealth of primary sources—including historical newspapers, interviews and memoirs—the author captures the strength and resilience of Black women. From the powerful speeches of abolitionist Maria Stewart to the community work of Black clubwomen and later, the historic political campaign of Shirley Chisholm, Giddings demonstrates how these women simultaneously addressed issues of race and sex.

To Joy My Freedom: Southern Black Women’s Lives and Labors after the Civil War

In this groundbreaking book, working-class Black women in Atlanta take center stage—as workers, political activists and agents of change in their communities. Drawing insights from an array of primary sources, Hunter brings to life the experiences of Black washerwomen who devised a range of strategies and tactics to confront racial, gender and class oppression. Deeply researched and beautifully written, the book stands as one of the best historical accounts of Southern Black women’s lives and political activities in the wake of Emancipation.

While these women are largely absent in mainstream narratives on feminism in the United States, Davis makes a compelling case that these blues women exhibited feminist consciousnesses and, in so doing, laid the intellectual groundwork for Black feminists to follow. Her attention to the dynamics of race, gender, sexuality and class result in a deeply nuanced exploration of these women’s lives and artistic expressions.

This comprehensive and thoroughly researched book charts the life of activist Ella Baker—one of the most influential Black women of the Civil Rights Movement. A gifted and dynamic organizer, Baker mentored a younger generation of activists in the Student Nonviolent Coordinating Committee (SNCC), an interracial civil rights group.

Ransby provides both a portrait of Baker’s life and a close analysis of her political ideas, showing how the activist came to reject hierarchies of race, gender and class. Drawing from her varied writings and speeches, Ransby captures Baker’s passion, resilience, and unwavering commitment to nurturing the leadership potential of others.

Southern Horrors: Women and the Politics of Rape and Lynching

This brilliant book highlights the political work of anti-lynching crusader Ida B. Wells-Barnett. The author places Wells-Barnett in conversation with white reformer Rebecca Latimer Felton to demonstrate how these two Southern women’s rights activists addressed the issues of rape and lynching during the Jim Crow era. While both women held different views, they were actively engaged in the struggle for women’s rights in the nineteenth century. Through a comparative approach and with clear and vivid prose, the book illuminates the politics of race and sex in the Jim Crow South.

This groundbreaking book charts the history of Black women in the U.S. Communist Party (CPUSA) between 1919 and 1956. It follows the lives of a cadre of women activists, including Louise Thompson Patterson, Audley “Queen Mother” Moore, Claudia Jones and Esther Cooper Jackson.

Drawing on these women’s writings and speeches, the author makes a compelling argument that these radical Black women were the first to articulate intersectionality—a term later coined by legal scholar Kimberlé Crenshaw to describe how social categories such as race, gender and class intersect.

At the Dark End of the Street: Black Women, Rape and Resistance—A New History of the Civil Rights Movement from Rosa Parks to the Rise of Black Power

This important book begins with the 1944 rape of Recy Taylor, a 24-year-old Black mother and sharecropper in Abbeville, Alabama.

While walking home one evening after a church service, Taylor was forced into a vehicle and brutally raped by seven armed white men. When leaders of the National Association for the Advancement of Colored People (NAACP) heard the news, they sent Rosa Parks—then an investigator and organizer—to lead the case.

By uncovering this previously unknown story, McGuire’s book offers a new and compelling history of the Civil Rights Movement—revealing how Black women’s protests against sexual assault and violence was central, not peripheral, to the movement.

In this remarkable biography, historian Jeanne Theoharis challenges mainstream historical accounts of Rosa Parks as a quiet and unassuming activist who was accidentally thrust into the national spotlight following her 1955 arrest.

Drawing insights from materials in the Rosa Parks estate, Theoharis carefully charts Parks’s active engagement in political movements in the decades leading up to—and in the decades after—her arrest. With great skill and precision, Theoharis situates Parks as not only a key figure in the movement for civil rights, but also a significant voice in the history of Black radicalism.

Murray’s legal writings, for example, helped Thurgood Marshall challenge racial segregation in Brown v. Board of Education. And in 1966, she founded the National Organization of Women (NOW) with feminist Betty Friedan.

Murray’s accomplishments were many and she bore many titles in her lifetime—from legal scholar to priest. As she navigated the political and social terrain of the twentieth century, Murray privately struggled with issues of gender identity. Her story sheds light on the intersections of race, gender, sexuality and religion in twentieth-century America.

In this original book, the stories of Black women in New York City who have been absent in historical narratives come to life. Weaving together a trove of sources, including census records, newspapers, memoirs and city records, Harris takes us on a fascinating journey of New York City through the eyes of Black women like gambler Madame Stephanie St. Clair, radio evangelist Rosa Artimus Horne, medium Madame Patsy Taylor and fortune-teller Dorothy “Madame Fu Futtam” Matthews.

Harris shows how these women skillfully created unique spaces to participate in the city’s informal economy. Her close attention to these women’s lives and labors during the twentieth century shed light on the perseverance, ingenuity and creativity of Black women.

Keisha N. Blain is an associate professor of history at the University of Pittsburgh. She is the author of the multi-prize winning book, Set the World on Fire: Black Nationalist Women and the Global Struggle for Freedom (University of Pennsylvania Press, 2018). 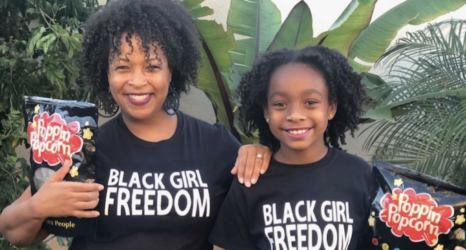