It was mid-April in Eloy, Ariz. Natália Santanna was wearing a complete set of Personal Protective Equipment (PPE), including bunny suit, protective glasses, facemask and gloves. Although apprehensive, she felt she had no option other than to go inside the Eloy Immigration Detention Center.

After having her temperature checked by a guard, she walked into a place which she described as having “thick walls, barbed wire, high fences, strobe lights and heavy air.”

Santanna is an immigration attorney in Oakland, Calif. She works mostly with asylum-seekers, and her visit to Eloy was to see a client detained in the Arizona facility. The client, a woman from Mexico, had her final immigration hearing scheduled. In contrast to Santanna’s preparation, inside the facility no one was wearing protective gear: neither the guards, nor the detained people. The guards worked as if no global pandemic was happening. Her client had no mask, no soap, no hand sanitizer and no gloves.

Beyond the mask, they are each given one small flask of soap per week. The flask is supposed to be used not only for hand washing, but also for showering and overall personal hygiene. In reality, the flask lasts a day at most. Only detained people who have money in their commissaries can buy more soap, and each flask costs over $3. They get paid $1 for a full day of work in the detention center.

“A total disregard for the lives of the people who are inside,” Santanna described to Ms.

And as of Wednesday, nearly half the employees at the Eloy detention center have tested positive for COVID-19. “How can you work in a place where you fear for your life or fear for your family?” one anonymous Eloy worker asked NBC.

Such conditions are not unique to the Eloy Immigration Detention Center. Similar practices can be found at the La Palma Correctional Facility, an immigration detention facility also located in Eloy, Ariz.

Santanna visited a different client in La Palma and reported more horrifying conditions. Detainees allege the billion-dollar private company that manages this and many other detention centers, CoreCivic, had been forcing them to sign liability waivers (in English) in order to get a mask.

And on April 10, in a San Diego facility—Otay Mesa Detention Center—when some detained immigrants refused to sign the waiver, detainees allege they were pepper sprayed by the guards.

Similar conditions have been reported from facilities in other states such as Texas and Mississippi.

Santanna also visited a facility in Otero, N.M. There, her client tested positive for COVID-19.

While sick in detention, he was put in “administrative segregation,” the detention center equivalent to solitary confinement, where he did not have access to proper medical care. Guards checked in on him twice a day during meal times. However, the center’s food is not nutritious for a healthy adult—even less so for one fighting a serious virus, consisting of either a piece of bread or mashed potatoes. If something were to happen to him, a heart attack for instance, he would not be able to receive the necessary medical assistance. He was alone in a tiny room for most of the day with COVID-19.

He survived the disease. But he was deported 12 days after he tested positive. While many immigration-related services are on hold due to the pandemic, detention and deportation seem to be considered essential services.

Santanna has not been back to any detention facility since the end of April. Currently she is debating whether or not she will fly to Eloy this month for a client’s last court hearing. The risk of getting on a plane to visit a facility that has over 200 COVID-19 cases confirmed is not a small one.

“If I send a motion to the court asking for a later date because I am afraid to go in, I am subjecting my client to prolonged detention in such conditions.” Santanna told Ms. “As an immigration attorney, this is a tough decision that I am grappling with, and that is a decision that no one should have to make.”

Santanna has two clients who are part of the same family and were placed in different detention facilities. Both of them have been denied parole. They have no criminal record, their family is in California, they have a stable address to go to, their family is willing to pay a bond, they are represented by a lawyer.

“There is really no reason for ICE [Immigration and Customs Enforcement] to believe that they will simply not show up to court,” According to Santanna. “They have a viable case and we just got denied [for parole]. On top of all that, the places where these two clients are detained are two of the places that have the highest numbers of COVID-19 [cases] within the detention centers.”

As an immigration attorney, she is frustrated. “It’s such a waste of time and resources, including the government’s. Trying to explain something that should be obvious, that my client is not a flight risk, is not a danger to society, has followed the laws, and has no reason to be detained in a place that has over 200 people sick.”

Facing such an unjust process, Santanna’s law firm is suing CoreCivic and ICE. After following all legal possibilities to release her clients from detention amidst a global pandemic, she believes that CoreCivic and ICE have not followed the constitution of the United States when detaining her clients.

“Their detention is unconstitutional and in violation of the 5th and 8th Amendments of the constitution,” Santanna argues. “Everyday that our clients are in detention is another day that they are at a high risk of contracting this deadly disease.”

Santanna is not the first attorney suing CoreCivic and other private corporations for the conditions forced upon detained immigrants inside ICE facilities. The Southern Poverty Law Center is also suing CoreCivic, while Towards Justice (along with Outten & Golden LLP, The Kelman Buescher Firm, Milstein Law Office, Law Office of R. Andrew Free, and The Meyer Law Office, PC.) is suing GEO Group Inc.

The global pandemic has exposed and increased the inhumane conditions detained immigrants experience in ICE facilities. The fact that privately-run corporations exploit immigrant labor is not new. The U.S. incarcerates the largest number of immigrants in the world.

Santanna points out that the #AbolishICE movement is interconnected with the recent demands to #DefundThePolice from #BlackLivesMatter protests.

“We really need to look into incarceration, not only of immigrants, but of Brown and Black populations,” she explains. “There is excessive incarceration in this country. In order to understand how it works, just follow the money. See who is making money out of mass incarceration. It is time to really think about the ways to end it, or at least reduce it significantly.”

Santanna is referring to the ways that incarceration fosters a system in which private companies make money by exploiting immigrants and communities of color.

Beyond the monetary aspect, politicians also exploit immigrants to win elections, just like Donald Trump did in 2016, and will likely do again in 2020. His whole 2016 campaign was based on anti-immigrant rhetoric. Trump did not hesitate in calling Mexicans rapists and criminals, perpetuating the idea that immigrants are a threat to the American people, and therefore, increasing the conservative vote.

Who are these people who Trump called rapists and criminals?

Detained immigrants are people who are waiting for their immigrantion cases to be heard. In the vast majority of the cases, the detained person is not a danger to society.

When asked what motivates Santanna to keep doing what she is doing, she says, “Justice. When you see that something is wrong, you need to find a way to make it better for people. I just want my clients to be able to go home and be with their families. And to be safe. Thinking about that gives me hope.” 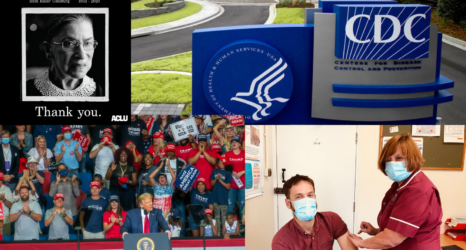 Weekly Pulse: RBG’s Impact on Reproductive Care; What’s Going on at the CDC?