As we near the end of July, it is clear our overlapping health and economic crises show no sign of abating—in fact, they are on the verge of becoming much worse.

Congress and the president now face crucial and urgent choices in averting a depression and creating a recovery that addresses the pain that has been disproportionately exacted on women.

The depth of our public health and economic crises dwarfs our policy response to date, as well as the responses currently being debated by GOP lawmakers.

Next to extending the unemployment benefits that have kept millions of workers and the economy from financial ruin, few decisions will be more consequential to the health and economic security of women and their families—and to the economy overall—than whether the government provides substantial financial support to states.

There is no getting around it: A gender-equitable recovery requires an infusion of funding from the federal government to the states.

COVID-19, and the federal government’s response to it, pushed states into financial crisis. States can be criticized for a lot, including generally failing to raise adequate revenues and the tragic variation in the quality of their unemployment insurance systems.

But they can’t be blamed for not having the resources in hand to counter a pandemic like COVID-19. Flawed-and-failed austerity politics aside, states typically are prohibited by their own laws and constitutions from deficit spending.

Unsurprisingly, states have begun sizable budget cuts, already causing real harm, during an unprecedented time when demand for health care and other services provided by state governments skyrockets. People are already feeling the pain of these measures—and more cuts are on the way.

Budget shortfalls will exacerbate gender and racial inequities already worsened by COVID and they will levy a heavy and long-lasting toll on women workers. Women and people of color, and particularly women of color, will be more likely to lose their jobs and the cuts to essential health, education, and other services will jeopardize their health and economic security in the short and long term.

Public sector jobs have been a critical pathway to economic security for women. Women and people of color are disproportionately employed by state governments and nonprofits that rely on state spending.

During the last recession, Black workers and women workers were hard hit by public sector job losses that resulted from budget cuts, and those jobs took longer to recover than those in the private sector—which meant women who already feel the pain of gendered and racialized income and wealth gaps fell even further behind.

Women need a healthy public sector for many reasons, but particularly in light of the unrelenting racial and gender discrimination they face in the labor market along with the pernicious trends of insecure gig work replacing once-solid jobs.

Public sector jobs, particularly those that are unionized, tend to have better benefits like health care, paid leave and retirement than other jobs that women of color are disproportionately likely to be channeled into. Those benefits are always critical but they are especially so during a global pandemic.

The economic crisis we now face is many magnitudes worse than the one we experienced in 2008, which many people, including women of color, never recovered from. States have already begun to eliminate jobs—and if Congress doesn’t act soon, there will be more cuts.

State budget cuts will translate to job losses in a range of fields that disproportionately employ women and are essential to any recovery: health professionals, childcare providers and educators.

A gender equitable recovery requires massive investments in education and child care. Current and threatened funding cuts are likely to impact child care providers without whom millions of parents cannot go back to work. And they will impact school budgets at a time when districts are desperate for even more resources to meet the public health regulations that will enable schools to open safely this fall.

Women represent more than three-quarters of public school teachers, 94 percent of child care educators and 98 percent of pre-K and kindergarten teachers. They will undoubtedly shoulder the heaviest burden of these economic changes as they continue to lose jobs at a higher rate than men and as the social programs they rely on to manage their families are allowed to fail.

A recovery that addresses the needs of women and families also necessitates targeted public spending on public health. Cuts to healthcare will have a negative impact on women’s health access and outcomes and also on their employment, and of course will have devastating ripple effects across the health system.

As of 2019, women accounted for 75 percent of full-time, year-round health care workers. Cuts could mean reductions in Medicaid reimbursement rates and reductions in the health workforce while states continue to address a global pandemic, see increases in Medicaid enrollments as laid-off workers lose their state sponsored health insurance, and while hospitals struggle to plug the hole of lost revenues. Hospitals in urban and rural communities are already in crisis—with many on the brink of closure even before COVID hit. They can’t weather any more.

States cannot adequately fund these and other critical systems on their own. The federal government should be infusing immense amounts of funding into states, which are collectively facing massive budget shortfalls through Fiscal Year 2022. The federal government has provided modest but grossly insufficient support to states to date.

All states—those that are (at least temporarily) on the downside of their COVID curve and those that are currently facing a surge—need an infusion of federal funding to effectively battle the virus and to ensure that families can safely send their children back to school.

Senate Majority Leader McConnell recently said states should file for bankruptcy before getting more help from government. Curiously, he hasn’t asked the same of corporations. This is a failure of leadership and an abdication of responsibility.

The United States was in need of an effective government at all levels long before COVID; that need has never been more urgent than it is now.

It is effective and robust government—at all levels—that will make the difference between life and death and a depression and equitable recovery. An austerity approach will only protract this crisis, immediately bringing the most acute pain to the communities already experiencing the worst of COVID, both in terms of health and economic impact.

Investing deeply in states and localities isn’t just the right thing to do; it’s also the smart thing to do. Every dollar of state and local fiscal aid will generate $1.41 in economic activity.

The federal government owns a unique role in our society that markets or private actors cannot and should not play. There’s no other institution that can spend money at such an enormous and necessary scale.

The question shouldn’t be: “How can we afford this?”

We can’t afford not to invest in states and localities. It is the only option to keep our families, our communities, our economy, and women especially, afloat during an unprecedented crisis.

There is no acceptable alternative, and the health and economic security of millions of Americans depend on it.

About Andrea Flynn and Indivar Dutta-Gupta

Andrea Flynn is the Director of Health Equity at the Roosevelt Institute. You can follow her on twitter at @dreaflynn.
Indivar Dutta-Gupta is co-executive director at the Georgetown Center on Poverty & Inequality where he leads work to develop and advance ideas for reducing domestic poverty and economic inequality, with particular attention to gender and racial equity 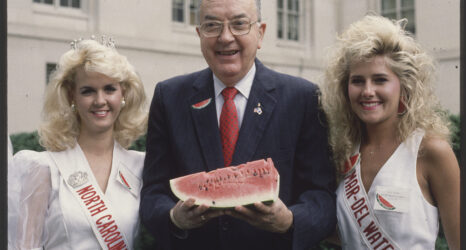 The Historic Nomination of Kamala Harris and What it May Mean for November
“We Have Her Back” Cautions Media Against Sexist VP Coverage
“A Good Day for Our Country”: Feminists React to Kamala Harris for VP