With the official race call of victories for Democrats Jon Ossoff and Rev. Raphael Warnock, a historic and tumultuous election season is officially coming to a close.

Of course, the unrest plaguing this election season was made no easier by attacks on democracy and voting access. One such complication: voter ID laws, which in many states, rather than loosen, only became stricter this year. And Georgia, the state at the center of the most recent round of consequential elections, boasts one of the strictest voter ID laws in the country.

Voter ID laws have an immense impact on elections: They have been proven to reduce participation in elections by between 2 percent and 3 percent, a study by the Government Accountability Office found—a huge number, especially in swing states where elections are won and lost by razor-thin margins. In fact, 11 percent of Americans lack a government-issued photo ID which is included in all these laws—and, perhaps not surprisingly, this impact is felt greatest by Black, low-income, young as well as women voters, all of whom are less likely to have the proper IDs.

But while Trump and his right-wing allies did everything possible to try to thwart rule of law, democracy ultimately prevailed—thanks in large part to organizations like VoteRiders.

Kathleen Unger, a lawyer and founder and president of VoteRiders, has created a nationwide organization that works on the ground, over the phone and via the web to answer questions from and provide assistance one-on-one to voters, and to ensure that voter ID laws—which disproportionately disenfranchise people of color, low income people, women, and young people—don’t prevent people from making their voices heard.

The day after Georgia’s Election Day, Ms. editor Roxy Szal sat down with Unger to discuss voter ID laws, the Georgia election, and the future of voting rights policies.

This interview has been edited for clarity.

Roxy Szal: Can you talk a bit about the organization you founded and lead, VoteRiders? How did your organization help in the lead-up to the Georgia runoff elections?

Kathleen Unger: Because of my prior volunteer work in election protection, frankly, VoteRiders was born of outrage — my outrage that people will be deprived of their right to vote. My unofficial tagline for VoteRiders, and for voter ID laws in general, is: “If you’re not a lawyer, forget about it.” That’s how complicated it is to wind your way through all these laws and rules.

VoteRiders focuses on voter ID to ensure that American citizens can vote with confidence, knowing they cannot be turned away. It’s a 501(c)(3) national nonpartisan nonprofit I founded in April of 2012. And we identify voters in need. We educate them, and we help citizens secure their voter IDs and have everything that they need. We are assisted by over 5,200 volunteers, including pro bono lawyers. And we work with and through over 700 partner organizations, 106 in Georgia alone.

We help people obtain all the documents they need, we can cover the costs if they need us to, and we provide transportation to and from ID issuing offices. We also have a voter helpline number, 844-338-8743, which voters can call or text, or on voteriders.org we have a chatbot. Interestingly, most of the chats and calls that come in are about expired IDs.

Szal: Georgia’s strict voter ID law has been proven to reduce voting access among Black voters and young adults. Can you give a brief explanation of Georgia’s voter ID policy and the origins of such a law? How did these laws affect the state’s elections?

Unger: Under Georgia’s voter ID laws, registered voters must show one of nine types of photo ID to vote in person. And if you do not present one of these IDs, you can vote a provisional ballot.

What makes Georgia a strict voter ID state is that your provisional ballot will not count unless you present an acceptable ID at your county registrar’s office within three days after the election. For voting by mail, your signature on the mailing envelope must match the signature on file with the state. And if not, the voter registrar is required to notify you and then you can cure, or fix, your ballot signature error within three days after the election by submitting a voter ID and signing an affidavit confirming that the signature was yours.

Georgia was right there at the beginning of strict photo ID requirements to vote, in 2005. And then Indiana had a similar law, and the Supreme Court upheld it. There’s been a huge increase of voter ID laws since then, and there are now voter ID laws in 35 states.

This past election season, some states enacted even stricter voter ID laws than then in previous years. And we expect more after this year. For example, in Georgia, both the governor and secretary of state, as well as some state legislators, have said that they want to require a voter photo ID to vote by mail.

“VoteRiders was born of outrage—my outrage that people will be deprived of their right to vote.”

Szal: What are some of the real-time impacts of voter ID laws?

Unger: Nationally, there are 25 to 40 million voting age Americans who do not have a government-issued photo ID. In addition, we know from VoteRiders’ on-the-ground work along with reputable studies that as many as 10 percent of registered voters are so confused, and potentially intimidated, by complicated and ever changing voter ID laws, that they won’t vote, even though they have valid ID.

Who’s impacted? Primarily those who do not have a current driver’s license in their state. And so they are voters of color, students and other young people, older adults who are no longer driving. Almost one in four Americans has a disability—obviously, a lot of these folks are not driving, and people with low income. And in some states, interestingly, women, because there are several states that require an exact match between the name on your ID and how you’re registered to vote.

Unger: REAL IDs are one of the types of federal ID that, starting October 1, 2021, will be needed to board a commercial aircraft to fly domestically. It’s a very onerous process.

If you don’t have a current passport—which obviously disproportionately affects low-income people—then you will need to provide an original or certified copy of your birth certificate and of any name change since then. So you have a birth certificate, then there’s the marriage license, if your name changed because you’re divorced or your spouse passed away, or a new adoption, you need to have all of those legal papers. And that impacts women, especially the 80% of women who marry in this country who change their names.

Lastly, you need two documents that prove residency. And this can be an issue for people who live in any group situation, whether it’s a nuclear family, or an apartment building where the landlord pays all the utility bills. Now you add to this the pandemic, and the fact that the ID issuing offices are, if they’re open, are available by appointment only. And then there’s transportation, etc.

Szal: Despite the harm they cause, voter ID laws have the support of a staggering four in five Americans, according to Gallup research from 2016. Clearly there seems to be a disconnect between the messaging of ID laws and the actual harm that they cause.

Can you explain this disconnect? How can we get public opinion to shift?

Unger: You’re absolutely right—75 to 80 percent of Americans, according to the polls, think that voter ID is a fine idea. I believe they think it’s just common sense that you need an ID. Since about 85 percent of Americans who are eligible to drive have a driver’s license, they just don’t really think about what it takes to obtain an ID—the financial, temporal and other aspects.

Furthermore, they don’t realize that, for example, student IDs enable you to do a number of things, but not necessarily to vote. Similarly, other kinds of ID, like government employee photo IDs, enable you to do what you need to do in your life, but is not sufficient to enable you to vote in Texas. It’s a lack of understanding, and identifying for whom obtaining an acceptable ID to vote can be incredibly difficult to virtually impossible.

Szal: Can the Biden administration and the new Democratic-dominated Congress pass any laws to alleviate some of this confusion and harm?

Unger: My perspective is that, only if the U.S. Senate eliminates the filibuster, can H.R.4, the John Lewis Voting Rights Act be enacted.

We had one voter who was standing in line yesterday to renew her license when she called us, and we let her know that she could use her expired Georgia driver’s license—oh, my goodness. It was so great. And she got out of line and headed straight to the polls and was happy about that.

Szal: You are one of the leading experts and legal minds when it comes to election protection. So I wanted to ask:

In your opinion, looking at the sheer mechanics of voting, how did it go in Georgia on Wednesday, and during the weeks of early voting? Between COVID-necessary changes and the baseless attacks on our democratic ideals, did our democracy hold up?

Unger: Yes, I would say it did, based on two factors.

First, the democracy movement focused all its power on Georgia, and delivered. As part of that movement, VoteRiders delivered voter education and assistance in an incredible depth. It was really exhilarating to be part of such an in depth and widespread effort to ensure that all eligible voters could vote, and they could feel confident that their ballot will count.

And the other key point is that it seems the voting process, from a governmental perspective, worked appropriately, and as it should have been, and with integrity.

Let’s hear it for determined voters. It can be complicated, it can be onerous. VoteRiders is going to be right in there with you — from the beginning to your victorious voting, till you know your ballot is going to count.

But it’s just so great to have voters who are determined to vote. That’s what it takes.

About Roxy Szal and Katie Fleischer

Roxy Szal is the digital editor at Ms. and a producer on the Ms. podcast On the Issues With Michele Goodwin. She is also a mentor editor for The OpEd Project. Before becoming a journalist, she was a Texas public school English teacher. She is based in Austin, Texas. Find her on Twitter @roxyszal.
Katie Fleischer is a recent graduate of Smith College and a Ms. editorial assistant working on the Front and Center series. 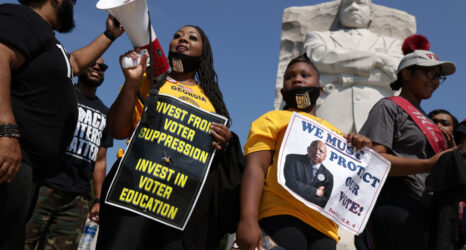