Feminists and human rights activists are calling on the Iranian government to release human rights attorney Nasrin Sotoudeh and affirm her right to advocate for others.

Iranian human rights attorney Nasrin Sotoudeh has proven time and time again that she is committed to standing up for other’s human rights. And now, her own are under attack.

Sotoudeh is a human rights lawyer in Iran who has represented political prisoners, religious minorities, children and women punished for not wearing hijabs. Her incredible—and tragic—story is documented in NASRIN, directed, produced and written by filmmaker Jeff Kaufman.

In 2018, Sotoudeh was arrested and imprisoned for standing up for women’s rights. In January, she was transferred to Qarchak women’s prison, one of the worst prisons in the world. (“Qarchak is worse than you can imagine,” a former political prisoner told Ms.’s Pardis Mahdavi.)

Almost immediately, she was infected with COVID-19, made even more dangerous due to a heart condition Sotoudeh developed after a 46-day hunger strike.

Now, feminists and human rights activists are calling on the Iranian government to release Sotoudeh and affirm her right to advocate for others. Bryan Stevenson, founder and executive director of the Equal Justice Initiative released a video Friday honoring Sotoudeh and calling for her release. Stevenson and Sotoudeh are co-laureates of the 2020 Right Livelihood Award, which honors “courageous people solving global problems.”

Watch and share the video, or read the transcript of the video below:

“Hi. My name is Bryan Stevenson and I’m a human rights attorney in Montgomery, Alabama. For the last thirty-five years, I have represented the poor, the condemned, the wrongly convicted and unfairly sentenced in America’s jails and prisons. In my country, we have horrific problems of inequality and injustice. The United States has the highest rate of incarceration in the world and so it has been necessary for advocates [and] lawyers to challenge inequality.

I am the product of civil rights activism. My great grandparents were enslaved in this country and slavery was followed by lynching and racial terror, then segregation and racial hierarchy. And we were required to fight and all across the world it is necessary that we affirm the value, virtue and promise of human rights. That’s how every society gets to a better place.

I am speaking today because a few months ago I had the great privilege of being honored with [The Right Livelihood Award along with] the extraordinary lawyer and advocate, Nasrin Sotoudeh. She is an amazing human being who believes as I do that every society thrives, every society gets closer to its full potential when we protect the basic right and dignity of every human being; when we eliminate bigotry and bias.

Today, I like to ask the Iranian government to please allow Nasrin to be the advocate that we all need her to be; to fight for human rights in a way that upholds the values and commitment to justice that I hope we all embrace. I stand in solidarity with Nasrin because I believe as she does that justice is essential; humanity and dignity for all is essential; equality is essential in every society on the planet.

I support you Nasrin and wish you all the very best.”

For a Farsi translation of the video transcript, head here. (And thanks to Parisa Saranj for this translation!)

From Iran, Solidarity With American Women 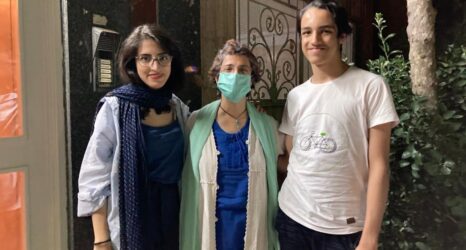 Nasrin Sotoudeh, Iranian Rights Lawyer, Home Temporarily: “We Are Hoping for a Better Future That Can Protect Us”