Feminist Sex Ed: What It Is, Why We Need It, and How It Can End the Orgasm Gap - Ms. Magazine
Skip to content

If sex ed programs included the clitoris, would the orgasm gap close?

Curious about the class, Denison asked him, “Did you learn anything new?”

The boy responded, “Yeah … I learned that most sixth-grade boys don’t throw the word ‘clitoris’ around.”

He continued: “The first time I said it, I didn’t really notice anything. But the second time … everyone kept laughing and looking at me, even the teacher. And then the third time I said it, the teacher asked me to stop talking and changed the subject.”

“Why did you say it three times?” asked Denison.

“Because it was missing from the diagram,” said the boy, who had learned anatomy from his mother. Then he added, “Why did the guy have his feel-good part and there was no feel-good part for the girl?”

Last month (May) marked National Sex Education month—otherwise known as #SexEdForAll month. In the United States, it often seems there are only two options when it comes to sex ed: abstinence-only or comprehensive. While comprehensive sex education is vastly better than abstinence-only, we need more—we need feminist sex ed.

The State of Sex Ed in the U.S.

To date, there is no national sex ed mandate. Individual states determine what kind of sex education kids get, or whether they get any at all. Some states mandate it, many don’t. Some mandate inaccurate, misleading and stigmatizing sex ed.

While sex ed is a state responsibility, the federal government does fund some programs. In the recent past, conservative presidential administrations predominately funded abstinence-only sex ed. In contrast, the Obama administration mostly financed comprehensive sex ed.

Abstinence-only programs teach students not to have sex until marriage. According to leading medical organizations, these programs promote archaic stereotypes, present inaccurate science as fact, violate human rights, and do not work.

In May 2019, reproductive health and rights organizations launched #SexEdForAll month. The point of #SexEdForAll month is to raise “awareness of the critical need for national sex education,” according to Planned Parenthood.

This year, the Sex Education Collaborative coordinated #SexEdForAll month. On May 4, #SexEdForAll month kicked off with a Sex Ed for All Youth Town Hall. The panelist, at the town hall, argued that comprehensive sex ed is only the foundation, not the end goal.

Berlin has taught comprehensive-plus sex ed for over 30 years. In 1989 she founded S.T.A.R. Theater for Social Change, which uses theatre to teach sex ed.

“Theatre can strengthen the emotional and psychological appeal of messages and provide a believable and interesting way to explore sensitive issues” wrote Berlin in a sex ed toolkit she produced in collaboration with UNFPA.

S.T.A.R. is not the only organization that goes beyond conventional, comprehensive sex ed. Charis Denison, whose work was featured in the New York Times best-selling Girls and Sex, does too.

Denison’s curriculum recognizes that American “culture rewards and treats people who either appear or self-identify as female in a different way” than people who self- identify as male.

In the United States women are still judged more harshly than men for engaging in the same sexual behaviors—they are subject to a sexual double standard. Women are also more likely to be raped than men—one in six American women have either been raped or the victims of attempted rape compared to 1 in 33 men.

“Frequently in sexual situations the female-identifying person disappears in some way or becomes a performer,” Denison told Ms. To address this, she reminds students to be the subjects of their sexuality—to get pleasure out of sex, not just pleasure someone else.

To those who think the orgasm gap is biological, Sara I. McClelland—a professor of psychology and women’s and gender studies—writes if we only focus on the physiological and behavioral responses of orgasms and “ignore the social and historical production of those responses, [we] will continue to reinforce sexual inequality as a ‘natural’ outcome.”

This begs the question: If sex ed programs included the clitoris, would the orgasm gap close?

Including the clitoris in sex ed “is an equity issue,” said Denison. In her classes—with the aid of an anatomically correct vulva puppet—she shows students the exact location of the clitoris. She does not leave it to sixth graders, like her son, to educate their peers and their teachers.

#SexEdForAll month is over, however, we need to continue to fight not just for comprehensive sex ed or even comprehensive-plus sex ed—but for feminist sex ed.

*Unless, otherwise stated, all quotes from and info about Charis Denison are from an interview conducted by the author on May 3, 2021.

** Unless, otherwise stated, all quotes from and info about Cydelle Berlin are from an interview conducted by the author on May 5, 2021.

Lucy Thimme is a rising senior at Smith College ('22). She double majors in the program for the Study of Women and Gender and Economics. 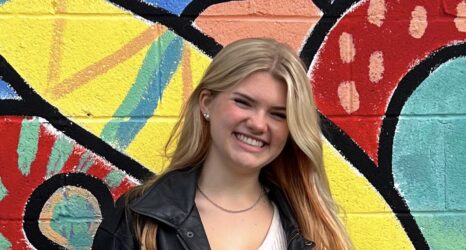