Despite growing up in the age of Mad Men, as a child, I was more like Don Draper than his wife Betty. At 16, it was in the pages of Ms. magazine that I realized I didn’t have to be either one.

The roots of my feminism were improbably seeded early. While neighborhood girls invited me to play house with their dainty melamine toy tea sets, I much preferred to play alone, fancying myself a struggling artist holed up in a cold-water flat in Paris reeking of linseed oil and turpentine. In a mid-century suburban world of Mallomars and Ding Dongs, any resemblances to Proustian madeleines existed purely in my imagination.

As a child in the early 1960s living in the cookie-cutter post-war suburbs of New York, I was an artist from a young age. Resisting the pull to be a June Cleaver in training, by age 3 I insisted others address me as Pierre from Paris. Donning a requisite woolen beret, a striped French sailor shirt and a clip-on brown mustache to authenticate my Parisienne look, Pierre affected an accent that was a cross between Pepi Le Pew and Maurice Chevalier. Once transformed, I was an expatriate without ever leaving the comfortable confines of my Long Island home. Neither a tomboy nor a girly girl, something inside me wanted to break the norms even without having the language to express it.

Neither a tomboy nor a girly girl, something inside me wanted to break the norms even without having the language to express it.

The portrayal of women I saw on television, schoolbooks and in my mother’s magazines were all singularly white, living out the Lady Clairol world of carpools, cookouts, cream of mushroom soup casseroles, and catering to contented children and happy-go-lucky husbands. This held little appeal for me, as did my own mother’s life as a happy homemaker who just never seemed all that happy.

Since traditional roles, let alone marriage, were of no interest to me, it’s not surprising that as a little girl I never played house in the conventional scenario. Though I had the requisite Betsy Wetsy, Chatty Cathy and Peter Playpal dolls, their care was overseen by a matronly, make-believe housekeeper with a strong Irish brogue named Maggie.

In 1962, pre-dating Murphy Brown by several decades, I was a single working mom—at least a pretend one. I had no husband nor did I have a boyfriend waiting in the wings. Besides, even in a fictitious world, between work and family, who had time for dating?

By second grade, Pierre had receded and I had moved into the corporate world. Among several imaginary enterprises I had created, I ran my own advertising agency, where I was the account executive, head copywriter and art director rolled into one.

After a long day at the office creating ad campaigns, I opted out of happy hour with my co-workers and diligently headed straight home to my family of dolls. As soon as I walked in the front door, I immediately questioned Maggie about how the kids were, even before I poured myself a stiff drink, which more likely consisted of a plastic tumbler of Hawaiian punch than an Old Fashioned. In my own house, the sound of clinking ice in a cut-glass was always the Pavlovian indicator that my father was home from work. Dad would make a beeline for the bar in our dining room to fix himself a highball even before saying hello to the family.

Despite being exhausted from my tedious day of meeting with difficult clients, I was never too tired to listen to Chatty Cathy’s ramblings or take time to change poor Betsy’s seemingly always wet diaper. At the height of the Mad Men era, I was my own Don Draper without the misogyny. But of course, I also had my own Betty, my mother, the perfect housewife, who looked in on her “grandkids” while I was at work.

However, a few years later, playing traditional house was not optional. When I entered junior high in 1968, I was required to take home economics, a class I ended up hating nearly as much as gym. Although the burgeoning women’s liberation movement had begun calling into question the role of women, this antiquated class was nothing short of basic training for being a successful wife and homemaker. But when it came to stitching and stirring, I was a flop.

While the teenage boys in my grade got sent off to shop class to work with wood, girls were learning how to bake the flakiest, most perfect biscuit sure to win a man’s heart. Having grown up in a household with a mother who ascribed to the ethos of new and improved—the take-a-can-and-take-it-easy school of cooking—my only reference to biscuit making was banging open a can of frozen pre-sliced biscuits courtesy of the Pillsbury Doughboy. Slice, bake and call it a day.

Not a fan of recipes, I mixed and measured as carefully as I could, but it was clear I would never measure up. My biscuits never did seem to rise to the occasion.

I fared no better in the much-despised sewing portion of the class. In spite of the fact that I was an artist with well-developed motor skills, a needle and thread was my downfall. Sewing machines were as foreign to me as a lawnmower and neither held any interest. The final project, which required me to sew an A-line skirt from a dreary Butterick pattern, ended in disaster as I ultimately stapled and glued the entire thing together rather than use a dreaded sewing machine.

Exasperated, my home economics teacher rolled her watery eyes shrouded in lime green eyeshadow and reprimanded me. Shaking her head in disgust, I will never forget being told in front of the class by this plump woman with a sloppy beehive hairdo and a cardigan with a frayed sleeve: “I hope you can do something because you certainly can’t sew.”

Painfully shy and mortified to be criticized so publicly while encircled by popular girls with Breck-perfect hair, my face bloomed to a deep shade of crimson. If only I could have twitched my nose like Samantha Stevens transporting me anywhere but that dusty rose classroom. I felt myself shrinking, following a pattern so familiar to women.

Later that afternoon I rode my Schwinn bicycle to the local Bobby Kennedy for President headquarters where I volunteered after school, working on his campaign. As I stuffed envelopes, licking the roll of 6 cents stamps till my tongue dried out, I knew, somewhere deep inside I could indeed do a lot more than sew a hem. There was more than something I could do!

In 1971, I was sweet 16 when I first read Ms. magazine, an insert in New York Magazine and after that, the world would be less saccharine. I was accustomed to the sappy articles in Seventeen magazine offering advice like “How to invent a new you and make the scene with turned-on lips in put-out pink” and colorful dayglo ads for “outta sight” panty girdles because “a girl needs to be tamed.” Miraculously, Ms. offered suggestions on how to raise my consciousness and not just my hemline. The hell with being tamed.

Ms. offered suggestions on how to raise my consciousness and not just my hemline. The hell with being tamed.

There were never any articles on “How to Get Him to Notice You.” Instead, there were those that spoke about the advantages of non-parenthood, living alone by choice and a 16-page handbook on how to start your own business. It gave me my first feminist click, that moment of recognition and I had a name for what I long felt. Feminism. Like their first cover girl, any one of us could be Wonder Woman. Or a cover girl. The pages were filled with women filmmakers, athletes, sculptors, writers, lawyers and activists. In time, I discovered I didn’t have to be someone I wasn’t in order to be who I was.

While my home economics teacher was hell-bent on trying to hem me in, Ms. helped me to weave my own unique life in whatever pattern I liked.

It turned out I really could do something else. I became a nationally exhibited artist. And to my delight, Ms. just ran a piece on me at 66—with not one mention of my inability to sew.

Sally Edelstein is an award-winning artist and writer whose intricate collages have been nationally exhibited in galleries and museums. Alongside Judy Chicago, her work will be on view with other feminist artists at the Sonoma Museum of Art in Jan. 2022. Her work has appeared in "Independent," "Next Avenue," "NextTribe," "Kveller" and is the author-illustrator of This Year's Girl (Doubleday). 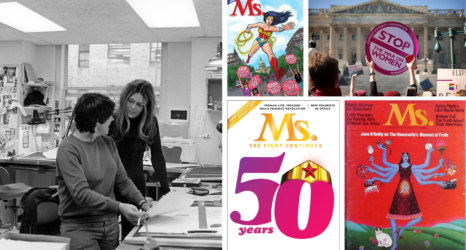 ‘Dear Ms.’: What Ms. Magazine Means to Readers, Over the Decades 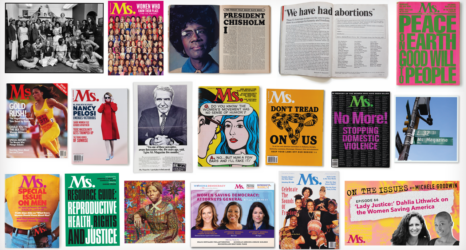 Ms. at 50: Five Decades of Playing by Our Own Rules