‘Marea Verde’ Feminist Collective Defends the Right To Decide in Mexico: “Sick and Tired of Seeing Our Sisters Go to Jail” - Ms. Magazine
Skip to content

The Marea Verde—or “green wave” in English—is a collective of feminists based in Mexico. The group provides legal, psychological, moral and social support with the goal of eliminating and eradicating violence against women and advocating for the decriminalization of abortion.

“Thousands of women die every year from clandestine abortion because it is seen as a crime here in Mexico. We are sick and tired of seeing our sisters go to jail and being made to look like second-class citizens,” said Yunitzilim R. Pedraza, legal counsel to the group. “Abortion is a personal decision. Women should be supported and not criminalized for it.”

The group is based in the Mexican state of Quintana Roo. The region has seen the highest level of teenage pregnancy in the country for the last 11 years. It also has a significant number of people in prison for the crime of abortion when compared to other states.

On Sep. 8, 2021, Mexico’s Supreme Court effectively decriminalized abortion, ruling that women cannot be penalized for having abortions. Before this ruling, terminating a pregnancy could carry a prison sentence ranging from 15 days to six years. The court also established protecting life starting at conception is unconstitutional because it goes against women’s reproductive health. These two main points, which for years served as pillars for anti-abortion groups, have now been brought down.

While the decision does not legalize abortion across the country, experts say judges will have to apply this precedent for future legal challenges to abortion restrictions in Mexico. Before the decision, only four out of Mexico’s 32 states endorsed legal abortion.

This critical move puts the country at the forefront of reproductive health rights in Latin America and Argentina.

Marea Verde is part of a larger nationwide feminist coalition in opposition to President Andrés Manuel López, who is not seen as particularly pro-abortion and has previously declined to take a position on the issue.

“History is proving us right,” said Pedraza. “Our sexual and reproductive rights are not negotiable or open to consultation.”

She continued, “As of September, the Supreme Court of justice for the nation declared unconstitutional articles of the penal code of Coahuila that criminalized abortion. This undoubtedly sets a precedent in the struggle and leads us not to waver in demanding respect for our right to decide. In Quintana Roo, Mexico and Latin America, we remain firm.”

On Sep. 28, Mexican Independence Day, Marea Verde marched again—this time to demand various penal code provisions be amended, repealed and added to clarify the state’s definition of lawful and illegal termination of pregnancy. Following this event, they signed an agreement with the attorney general of Quintana Roo on training and professional conduct, allowing them to participate and observe specialized prosecutors in practice—no doubt a step toward the group’s goal to fully decriminalize the right to decide.

“We are together, and we are strong, we will continue demanding our rights, and we will not give up until it is law!” said member Ariadne S.

This article and the accompanying photos were originally published on Justice for All’s website as “The Right to Decide.” It has been republished with permission.

Rebecca Robyns is a British human rights photographer based between the U.K. and Mexico. She has a master's degree in photojournalism from the University of Arts, London. Her main body of work focuses on women's reproductive rights in Mexico and Latin America. 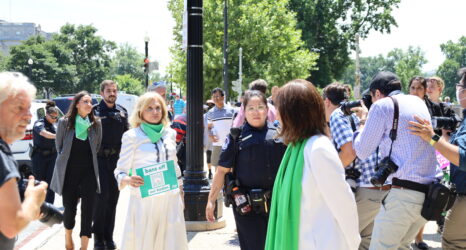