Ode to Aretha, or Reconnecting Women and Singing - Ms. Magazine
Skip to content 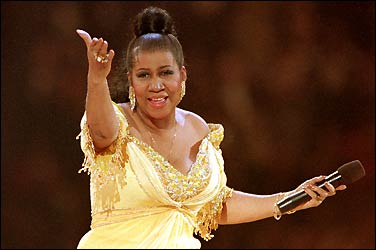 When I think of music’s–or specifically singing’s–potential for liberation, one voice immediately springs to mind: the earth-shattering, shiver-inducing, bone-chilling instrument possessed by Aretha Franklin. Aretha’s amazing talent is intimately linked for me with freedom, not only because of her own, very real struggle to express herself as a black woman artist, but also because of her tremendous capacity for instilling a sense of transcendence in her audience. As a listener, one is taken on a journey through a spectrum of emotions, and regardless of whether a song is mournful, pensive or joyful, Aretha manages to enthrall and elevate beyond the specific context, transporting one to this unshackled realm of, well, freedom.

Aretha’s gospel background undoubtedly plays a role here, as musical ecstasy is frequently reached by ever-intensifying call-and-response sections and coloratura passages, which allow her to really flex her vocal chords, showing off her vast range. A musical style so heavily steeped in the legacy of slavery inevitably conveys suffering and bears the marks of oppression; however, it also offers a way out of trauma and subjugation. Indeed this is the liberatory power Aretha literally gives voice to. Her music is therefore hard to resist, and I find myself continuously drawn to classics like “Respect,” “Day Dreaming” and “Rock Steady.”

After years as a self-professed Aretha fan and admirer, her records still excite me, and as a singer I still learn from her. I can’t say the same of more recent recording artists, and I am hard-pressed to find anybody in Aretha’s league, and with the same capacity to inspire. Certainly, the world has produced some fine singers, and women artists are struggling to launch successful careers despite the seemingly increasing odds presented by a patriarchal industry which confuses objectification with adoration and debasement with entertainment. But perhaps this is precisely where my difficulty in identifying women singing greats of the present era lies. Rather than linking a vocal artist with freedom, passion and emotion, we’re now made to connect most popular women singers with a re-enactment of that well-worn drama of scanty clothing and feigned lust/desire. In other words, we’re asked to look at them through what feminist theorists call the male gaze. All of this means that an artist’s talent, her craft and her music become secondary, a salable side-product for the actual commodity of her body.

This kind of objectification is nothing new–women have always been reduced to their physicality–but the 21st century version is creating a “pornographication” of our daily lives, which has increasingly been directed at the very young. In a bid to increase profits from new consumers, girls are now targeted as a matter of course, much to the dismay of some concerned parents and teachers. Sadly, women artists play a role in this dangerous game, whether they are the victims of self-objectification, believe themselves to be outside the bounds of patriarchal control or think of themselves as using the game to their advantage. Whatever the case may be, the result remains the same: aggressive and insidious objectification, which for music means subservience to the male gaze.

Perhaps, though, singing has changed; perhaps expecting women to “merely” be singers is passé and old-fashioned. Art has moved on, and a woman’s body is now as much part of her performance as her vocal display. Hence, she becomes the performance. But I find it hard to reconcile the stereotypical, sexist posturing found in many a music video with appeals to self-determination and artistic freedom. Claims by women artists that they’re subverting the male gaze through playful use of irony, for instance, seem shallow. And if no one gets the irony, then what’s taking place is a continued reinforcement of the stereotype rather than an undermining of it. Since pornographication is now so vociferous, we need outspoken, direct and clear artistic critique in order to turn the gaze into hearing and to re-stitch those connections between women artists and the sense of freedom, passion and emotion they potentially hold for us.

We can start by supporting those who are currently struggling against the odds of patriarchal industry, who are already critically engaged in liberating not only women but music itself (see for instance, the radical work of poet and singer Jill Scott). For, although Aretha surely was not immune to distinctly gendered and racialized expectations placed upon her by virtue of being a black female singer, she is living testimony to our capacity for overcoming such expectations. In light of the music industry’s current penchant for extreme objectification, nothing less than following in Aretha Franklin’s footsteps should be aimed for, as nothing less will truly liberate us as women, as singers, and as lovers of music.

Clara Fischer is a philosopher and musician. When she isn't busy writing, reading, playing the piano or singing, she's preoccupied with analysing the wisdoms of her cat.