Real-Life "League of Their Own:" Remembering Dottie - Ms. Magazine
Skip to content 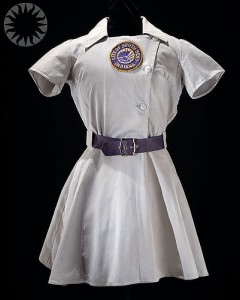 Dorothy “Dottie” Kamenshek, the star of the All-American Girls’ Professional Baseball League (AAGPBL) died Friday at the age of 84 in her Palm Desert home. Kamenshek, the talented first-base player who inspired the character of Dottie Hinson (played by Geena Davis) in the 1992 film A League of Their Own, was widely regarded as the best player in her league. During her career with the Rockford Peaches from 1943-1953, Kamenshek was selected for seven All-Star teams; she had a lifetime batting average of .292 and her fielding average was nearly error-proof at .950.

When reflecting on Kamenshek’s career with the Peaches, many journalists have focused on her impressive performance on the field, but they have glossed over the more complicated reality that Kamenshek faced as a woman athlete in the 1940s and 50s.

That is, Kamenshek and other AAGPBL women of her time were faced with double task of playing good baseball while still performing “womanhood” on and off of the field. Philip Wrigley, the Chicago Cubs owner who started the league, wanted to emphasize the “femininity” of his players, so the women of the AAGPBL were required to wear skirts on the field and attend charm school at night. As former player Pepper Paire said during an interview with Sports Illustrated’s Jay Feldman: “We had to wear high heels, all dressed up, and carry a book on top of our heads and say, ‘Bounce the ball.’ This was in the evenings at spring training, after 10 grueling hours on the ball field.”

The league’s preoccupation with femininity was born out of a keen awareness of the public’s discomfort with shifting gender roles at the time. Women who exhibited “masculine” qualities–in this case athletic prowess and financial independence–were disruptive to traditional gender order, but the league was able to reinstate a sense of “normalcy,” and thus recruit fans, by putting lipstick on potential “problem” women.

In her 2004 Journal of Baseball History and Culture, Patricia Vignola further explains:

The league felt the need to institute these rules of ‘behavior’ for the girls’ ‘own good’ as well as for ‘that of the future success of baseball.’ Most interesting were the etiquette rules regarding sportsmanship, dealing with the public and, in particular, [male] baseball fans. As the guide stated: ‘You [should] know she is a lady as soon as she opens her mouth.’  The players were always ‘ladies first’ and ballplayers second.

Women like Kamenshek were framed as glamour girls, but proved to be serious players. “People may have come out the first time just for laughs and to see the legs, but they kept coming back–and that was because we played good baseball,” said Paire. The AAGPBL expanded during and after World War II; the women even racked up a fan base of 1 million in 1948.

New York Yankees first baseman Wally Pipp predicted that a 24-year old Kamenshek would be the first “lady” major league player, and she was offered a contract to play on a men’s minor league team, but she refused it. “I thought it was a publicity stunt,” she told historian John Holay in 1983, according to The New York Times. (Eleanor Engle was also offered a contract to play on a men’s league at this time, but her contract was quickly withdrawn. National Association President George Trautman placed a ban on the signing of women players). Kamenshek left the league in 1953 due to a back injury and went on to become a physical therapist.

Kamenshek broke new ground for women in athletics at a time when fragility was held up as a valued feminine trait; she thrived in a male-dominated sport and was loved for it. As Vignola writes, “[Kamenshek and other AAGPBL players] made a mockery of the postwar American feminine stereotype. They looked like Rita Hayworth and played like Ted Williams.” Still, Kamenshek, like many other women athletes of her time, have largely disappeared from the popular consciousness.

After the dissolution of their league in 1954, many AAGPBL ball players began to silence themselves about their own experiences. As Yvonne Zipter wrote in her 1993 Hotwire article:

The period following the end of the AAGPBL was a time of ambivalence for many of the women. Certainly, they were glad to have had the chance to play major league ball. Many were also appreciative of the opportunities and experiences they would never have had otherwise … Nevertheless, most of the women were sad and disillusioned as well … The accomplishments of those who had played were quickly forgotten by the public, and soon the whole league was such a distant memory that the women were often not believed when they talked about their major league baseball days.

Kamenshek’s memory was resurrected through A League of Their Own, but her name still lacks a familiar ring. I’m not probably the only one who heard names like Joe DiMaggio long before I heard of Dorothy “Dottie” Kamenshek.