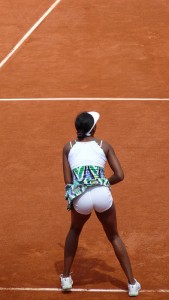 Venus Williams’ recent French Open display of her assets (and by that I also mean her clothing line and her masterful tennis prowess), has upset a few people who feel that the wardrobe choice was risqué and inappropriate. I want to explore five important gender lessons we can all learn from a lingering look at Williams’ behind (which you can see here).

1. Even a professional, successful woman like Venus Williams believes that she has to be sexy and not just skilled in order to sell a product. Off the court, the ensemble could pass for lingerie. As a businesswoman, Williams seems to believe that sexy is the best way to market to her target audience even though the look is neither entirely practical for her sport nor appropriate for young girl tennis players.

2. Black women’s bodies are products that produce cash for white patriarchy. Lest the naysayers forget, Williams had to get permission from the Women’s Tennis Association to wear her outfit during the tournament. I find it hard to believe that the decision-makers didn’t consider the economic appeal of a young, sexy woman player looking half-naked on the court. The blogosphere and YouTube are already riddled with commentary implying that Williams has a great body and should play naked. My guess is that many of her fans are not regular French Open audiences.

3. Black women’s behinds are still an international spectacle. It’s wildy ironic that Venus Williams and “The Hottentot Venus” share a name and spectacle status because of their bottoms. The original black Venus was Sara Baartman, an African slave displayed across Europe as a freak show because of her unusually large buttocks, genitalia and other distinct physical features. Even after her death she was an object of scientific allure—many of her body parts were preserved for display. Of course, according to Latoya Peterson, black booty body politics are frequently discussed in contemporary popular culture. Peterson notes that she had to learn to appreciate her curves as an alternative beauty standard while at the same time negotiating the unwarranted attention that her curves drew.

4. Flesh-colored underwear now includes dark brown in addition to beige. For all the brown-skinned women out there, I hope Williams’ line permanently includes them. Every woman knows, if you’re gonna show your drawers, they should be same color as your skin. It’s just polite. Which is why I was surprised at the amount of people who automatically assumed that Williams wasn’t wearing panties. Why would a woman show up to her job and show her behind without panties? This moment tells me that too many people still believe the stereotypes of the innately indecorous black woman who does not know how to dress let alone behave in public.

5. A woman athlete receives more attention for what she wears than how well she plays. Props to Tracy Clark-Flory of Broadsheet who made a point of noting that Williams decimated her opponent Patty Schnyder with consecutive 6-3 victories while “maintaining her number two world ranking while dressed for the Moulin Rouge.”

All of those important lessons learned, I am proud to have the opportunity to discuss the wardrobe choices of an African American woman on top of the world’s tennis game, because they are her choices as opposed to the forced displays of her historical predecessor.  Black women’s body displays are still very often problematic because of their associations with patriarchy and profit, but as Williams helps us understand, black women are exercising more control over those bodies than they ever have before.