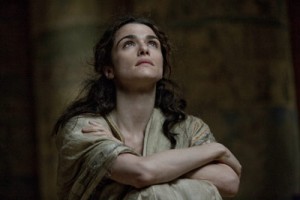 It’s unfortunate that Agora, a film about the 5th century neo-Platonist philosopher-astronomer-mathematician Hypatia, is coming out this weekend. It’s in theaters along with Prince of Persia: The Sands of Time and Sex and the City 2: Abu Dhabi Do (not really the title, but it might as well have been).

Rachel Weisz, the star of Agora, jokes that her film has just as much action as its swords and sandals competition, but the battles are more about ideas. As Hypatia, the most prominent woman philosopher of the ancient world known to us, Weisz helps educate a new audience with what she says is actually a very contemporary tale.

Ms. Blog: I never learned about Hypatia in school, did you?

Rachel Weisz: I had never heard of her! I think history’s probably forgotten a lot of interesting women–painters, writers. George Eliot had to change her name and write under a male pseudonym. But I was terrible about math and science in school. When I add a tip, I count on my fingers! I do think however that there’s a certain level of drama seeing someone figure out something you already know, and in a time before they had telescopes looking out into space. How would they figure out the earth was round or flat? Or the relationship to the sun? It’s quite thrilling to think about.

MB: Is that what appealed to you, a chance to make her accomplishments known, to bring her to life?

RW: Yeah, why not? But what also appealed to me was the fact that this story, set in the 5th century, is about today. If you turn on the news on any given day, you will see a story about some kind of religious fundamentalism, and right now the hotter fundamentalist group is the Islamic fundamentalists. The idea that people kill each other because of their religion–you might think it’s a really primitive, archaic, 5th century thing to do, but actually no, it’s happening right now. And in America right now, with Christian fundamentalists arguing against teaching Darwinian evolutionary theory or stem cell research. It might not be as violent, but it’s still religion versus ideas.

MB: And there are other parallels with how, when the Greco-Romans are in power, Hypatia is a teacher, but when the Christians come to power they say no women should have that kind of influence.

RW: It’s like when the Taliban took women back into the Middle Ages, the Dark Ages, literally, which this film chronicles the beginning of, to see this idea of how should a woman be allowed to think, or teach or be taught. I was reading an article about some young girls in Afghanistan, post-Taliban, but still they had acid thrown at them for going to school. We can go to the moon, we have cars, antibiotics and cures for some cancers, and we think we’re so enlightened, but we haven’t figured it all out.

MB: There’s a scene where you’re teaching a class and you tell them, “We are all brothers.”

RW: And we know it’s true. She taught pagans and Christians and Jews in her class, and she did not discriminate. That’s a fact.

MB: One fact about her story seems to be up for debate–whether she was ultimately killed because of religion or politics?

RW: I think at that moment in time, they were the same. I mean, it was a new religion, Christianity, trying to get political power, and she was a kind of scapegoat. So it was religious and political, and it’s hard to separate them often, isn’t it?