Shrek Forever After: It Ain’t Easy Being (A) Green (Woman) - Ms. Magazine
Skip to content 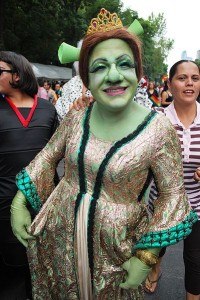 Fairy tales rarely move beyond their tidy endings into the realm of what they promise will be “happily ever after.” As many end with marriage, one can presume that “ever after” for the likes of Snow White, Cinderella, et al would likely include children. Shrek breaks this fairy tale model in its fourth installment, moving beyond first love’s kiss into that realm where days often are more monotonous than happy because you’re parenting young children.

In the clever opening scene of Shrek Forever After–the #1 film in the country last weekend–Shrek and Fiona spend a blissful, carefree day parenting their triplet ogres. Fiona, at day’s close, says “I wish every day could be like this.” Then, in Groundhog Day fashion, the film whizzes us through numerous repetitions of this same type of day, with the triplets crying more loudly, the diapers becoming more toxic and Shrek becoming ever less happy with the daily grind of child rearing.

The film frames Shrek as missing the days before family responsibility. Fretting to Fiona, “I used to be an ogre, now I’m just a jolly green giant,” Shrek yearns to live his pre-dad days again. Thanks to a gleefully evil Rumpelstiltskin, he is given “One day as an ogre”–a do-over of sorts that places him in an alternate world where Rumpel rules Far Far Away as a tyrannical dictator and ogres are banished to an underground life of toil.

In this alternate reality, Fiona leads “the resistance,” fighting for the freedom of ogres everywhere. The day Shrek has been given threatens to erase his former existence (and thus his marriage with Fiona and his three ogre babies), but Shrek is excited to be back in the world of causes and adventure. And herein lies the moral of the story: Happily ever after is not all it’s cracked up to be. Offering revolution as an anecdote to suburban ogre life, the film speaks to what Betty Friedan might have called “The Ogre Mystique.” Shrek, like the women Friedan discussed in the U.S. of the 1950s, feels trapped within his domesticated sphere. He needs more than mud baths for a purposeful life and more than a one eyeball martini at the end of the day to relieve his stress.

Speaking to the more egalitarian approach to parenting many households in the U.S. now attempt to enact, Shrek is experiencing a loss of identity similar to the “housewives” Friedan studied. Though this plot is explored with the visual humor and zesty wit we have come to expect from the franchise, it also falls into another expected (and less desirable) reiteration: focusing on male interests and desires.

Granted, the name of the series is Shrek and we can thus expect his dilemmas to drive the story, but this time around the lack of focus on Fiona stood out to me. Yes, she gets to be a rocking ogre-revolutionary, leading the resistance with aplomb. But what of her dissatisfaction with domesticated life, her yearnings for adventure? If she has those yearnings, they remain unnamed. Instead, she is presented as all-too-blissfully wearing the mantle of wife and mother, a problematic representation that perpetuates the notion that women are happy and well-placed in the private sphere of domesticated life while men chafe within its narrow confines.

Though I enjoyed the film, I would have enjoyed it even more if it offered more egalitarian focus, and one that was more realistic in its portrayal of mothers. Instead, we get what Susan Douglas and Meredith Michaels call “the new momism” where even green ogre mothers love every second of their hyper-helicopter parenting.

I love Fiona, but she is one female character among a slew of males, and one whose story is sidelined. As revealed by the Geena Davis Institute on Gender in the Media, this unbalanced gender phenomonon in childrens’ media has changed little since the 1940s. Surely it can’t be easy being the lone green female lead in a fairy tale world that loves its suave fighters (Antonio Banderas as Puss ‘n Boots), its sidekick comic relief (Eddie Murphy as Donkey) and its  jolly green giant (Mike Meyers as Shrek) so much more than its cursed human/ogre Fiona (Cameron Diaz)–just as it can’t be easy for all the girls who have to watch movies where their stories are either absent or in the background.

Yes, there is a cadre of witches this time around, and other Shrek iterations have involved kick-ass princesses, but this franchise, like most animated films, still puts males front and center. Here’s hoping that soon some of these happily-ever-after tales will focus on a female who longs–like Shrek–for adventure and purpose rather than merely “true love’s kiss.” Or, as Geena Davis puts it, here’s hoping for the day “when gender equality is no longer a fairy tale.”