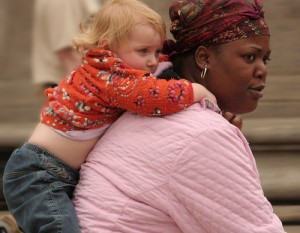 New York State is on the verge of enacting the first ever bill of rights for domestic workers. This week the state Senate passed the Domestic Workers’ Bill of Rights by a vote of 33-28. A similar bill was passed by the New York State Assembly last year. Once the two bills are reconciled, it will be sent to Gov. Paterson to sign.

The Domestic Workers’ Bill of Rights has been debated in the New York State Legislature for six years; its passage is long overdue. The bill would ensure the state’s nannies and housekeepers one day off per week, overtime pay, paid vacations, sick days, advance notice of termination and legal recourse when their rights are violated.

Successful passage of this bill was the result of organizing by domestic worker rights groups in New York such as Domestic Workers United, the Workplace Project, Andolan and Damayan. Over the past decade and a half, these groups have mobilized thousands of domestic workers, made treks to Albany to lobby the Legislature, held town hall meetings, protested at the homes of abusive employers, filed lawsuits for back payment of wages and held rallies, marches and vigils to raise awareness about the plight of private household workers. Because of their efforts, both Nassau County and New York City had previously passed legislation requiring employment agencies to inform domestic workers of their rights. But the current bill would make New York the first state to legislate a bill of rights for domestic workers who lack federal protection.

Domestic workers (along with agricultural workers) were one of the few categories of workers excluded from the Fair Labor Standards Act (FLSA) and the National Labor Relations Act in the 1930s because of opposition by white southern congressmen who insisted on control over the largely black southern workforce. After 1974, domestic workers were included in FLSA minimum wage laws, but baby sitters and companions for the elderly are still not guaranteed minimum wage, and live-in workers are not assured overtime pay. Moreover, domestic workers don’t have the right to organize and bargain collectively and are excluded from the Occupational Safety and Health Act and civil rights employment laws, which only apply to workplaces with 15 or more employees.

The New York State Domestic Workers’ Bill of Rights will not address all the problems of private household workers who work in isolated settings and are often subject to abuse. But it will add a measure of regulation to an unregulated industry and is an important step toward ensuring for domestic workers some of the same rights that most other workers take for granted. Equally important, it will serve as a model for other states—and the nation—to consider similar legislation.

Above: The Nanny. Photo courtesy of Clarity.