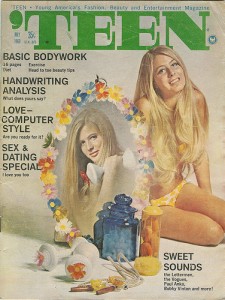 Rhythm method madness: Seventeen percent of sexually active teenage girls said they used the rhythm method as a means of birth control in 2008, up from just 11 percent in 2002, according to the latest report from the Centers for Disease Control. For most of these girls, “rhythm method” means guessing the least risky day to have unprotected sex. You and I both know that one in five teenage girls isn’t taking her temperature every day and charting the consistency of her cervical mucus on the calendar.

Amanda Marcotte of RH Reality Check blames abstinence-only propaganda for the trend. She points out that abstinence-based curricula rely heavily on shame to discourage kids from having sex. Teens who are ashamed don’t necessarily abstain, but they are less likely to use birth control when they do have sex. Claiming to use the rhythm method is an excuse not to use real birth control. Marcotte points out that abstinence-only curricula also promotes stereotypes of female passivity and male dominance, which makes it even harder for girls to negotiate condom use.

There is a glimmer of hope: Robin Marty of RH Reality Check reports that the Obama administration is shifting gears on sex ed. For the first time in many years, school districts will be eligible for federal funds to teach evidence-based, comprehensive sex ed. Abstinence-only funding hasn’t gone away, but at least districts will have the option.

Recession-based bedroom blues: Interestingly, teens are having slightly less sex overall, according to the CDC. The abstinence-only crowd is trying to take credit, but as Stephanie Mencimer of Mother Jones notes, the recession seems to be putting a damper on the sex lives Americans of all ages. The latest sex survey by the AARP showed that Americans over 45 are having less sex than they were in 2004 and enjoying it less as well.

Looking at the same study, Wendy Strgar of Care2 notes that that teen motherhood has become much more socially acceptable among adolescents, perhaps due to highly publicized teen moms like Bristol Palin and Jamie Spears.

The war on choice: Michelle Chen of RaceWire reports that hundreds of anti-choice bills have been introduced in state legislatures around the country since the passage of national health care reform. Missouri’s new Abortion Restriction Act requires abortion clinics to post signs offering state assistance if a woman has the baby. Too bad the Missouri legislature slashed the funds that would have provided most of those services.

Two moms=healthy kids: In other health news, a new study forthcoming in the journal Pediatrics shows that lesbian couples raise healthier children than straight couples. Gabriel Arana of TAPPED suggests that maybe lesbians do better on average because they are a self-selected group of highly motivated parents that had to overcome obstacles in order to raise their kids. Or maybe two moms are better than one.