June is a High-Flying Month for Women - Ms. Magazine
Skip to content 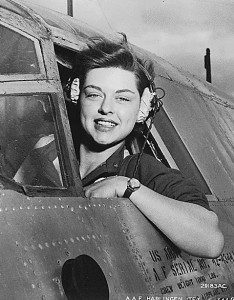 Although June is often associated with weddings, it would be better known as the month of women’s firsts in flight. Women achieved a remarkable number of aviation records in June, beginning on June 4, 1784, when Madame Elisabeth Thible of Lyons, France, became the first woman to take to the air (in a balloon piloted by one Monsieur Fleurant). The flight lasted 45 minutes, covered four kilometers and reached heights of 1,500 meters. A newspaper account noted that Fleurant credited Thible with the success of the flight, both for feeding the balloon’s fire box and for her extraordinary courage.

One hundred and forty years later, on June 19, 1928, pioneering pilot Amelia Earhart became the first woman to cross the Atlantic. The flight was arranged by Amy Guest, a wealthy American living in London, who had intended to make the flight herself. Guest’s family objected, so they hired publicist George Putnam to look for a replacement. Putnam chose Earhart, who was not well known at the time, dubbing her “Lady Lindy” after the aviation hero of the day, Charles Lindbergh. Though she was little more than a passenger on the flight, the sensation of a woman crossing the Atlantic made her an instant worldwide celebrity. Of course, Earhart later went on to earn fame for her own flying endeavors, and in 1932 became the first woman to fly solo across the Atlantic.

Moving into the modern era, the U.S. vowed to take the lead in the space race, but its reluctance to use women pilots left the distinction of being first woman in space to Soviet cosmonaut Valentina Tereshkova, who left Earth’s atmosphere aboard Vostok 6 on June 16, 1963. It took 20 years for the first American woman to follow, when, on June 18, 1983, Sally Ride flew out of Earth’s atmosphere on the space shuttle Challenger. Ride was the third woman in space, following Soviet Svetlana Savitskaya.

While these aviation pioneers have opened many doors, commercial flying has been, and appears to still be, a boys’ club. The first woman commercial airline pilot was Helen Richey, hired by Central Airlines in 1934. The International Society of Women Airline Pilots (ISWAP) website notes that Richey resigned 10 months later after being denied admittance to the all-male pilots’ union.

Women in aviation continue to fight for their right to flight. Women in Aviation International‘s most recent data counts 7,100 women commercial pilots in the United States in 2007, or just 6.17 percent of the total. The ISWAP adds that while approximately 4,000 of those women work for commercial airlines, a mere 450 seem to have achieved the rank of captain.

Women may be doing better in astronautics, where their contributions are becoming recognized as an everyday occurrence and less of a curiosity. While the field is still overwhelmingly male, NASA‘s current statistics note that 53 women, including cosmonauts, astronauts, payload specialists and foreign nationals, have flown in space. Three women have served as space shuttle pilots–first Eileen Collins, then Susan Still Kilrain, and Pamela Ann Melroy. Having several women on missions, not just the single token female, has become commonplace. With that said, it is still too common to see all-male crews greeting us on those long-distance video calls from orbit. Maybe the next “first” should be an all-female space mission just to even things up.