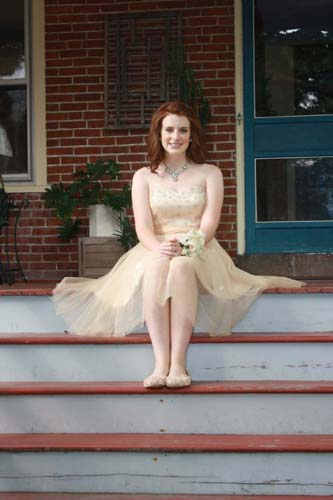 Some of you might have already heard of Jamie Keiles. The 18-year-old high school senior from suburban Philadelphia has made a feminist splash with her blog The Seventeen Magazine Project. Keiles’s blog documents her 30-day experiment to follow at least one piece of advice from the teenage girls’ bible, Seventeen magazine. What’s remarkable about Keiles’s experiment is, well, Keiles herself. Instead of an A.J. Jacobsesque fumble through mindless observations, The Seventeen Magazine Project is a witty critique of teenage culture. Keiles tackles everything from nail polish to prom to race, providing pie-charts and photographs to document and dissect her journey. Along the way, Keiles points to the very problem of fashion magazines like Seventeen; their pages are filled with a carefully constructed fantasy which is presented to young women as reality.

Keiles recently told me that was one of the reasons she picked Seventeen for her project rather than trendier magazines aimed at young women. Keiles said,

Like Keiles, I too read Seventeen magazine and my subscription was a gift from my grandmother. It was in the pages of Seventeen that I learned about what I should look like, act like, and expect of my high school experience. And like Keiles, I too found reality to be far different than the magnificent hype of Seventeen’s glossy pages.

Keiles wrote two blog posts about the ultimate teenage rite of passage—the prom. In the first post, Keiles documents, “the most labor intensive and expensive beauty process of my life thus far,” getting ready. Running with the mantra, “make me look conventionally attractive,” Keiles put in the time and money to look like a prom princess straight from the pages of Seventeen. What did it take? A total of 4 hours and 45 minutes and $461.50. When I asked Keiles about the time and expense she said:

I think I definitely spent an average to low-average amount for my area. I live in an upper-middle class suburb of Philadelphia. There were definitely girls who spent upwards of $600 on their dresses, not even including hair and nails. People took limos. It’s a privileged area, I’m not going to make myself out to be representative of the average teenage girl. There is no such thing. We are a very diverse group, us teens, financial situations included.

But were the money and time worth it? I asked Keiles about her prom experience. Was it as magical as Seventeen promised it would be? Keiles responded, “Prom was fun, but I’m not sure anyone would say it was magical, unless you define magical as dry chicken cutlets and sweaty kids dry humping to oldies.” That sounds like a pretty accurate description of my own prom festivities which, I remember leaving early even though, like Keiles, I had spent the requisite amount of time prepping to make the event magical. But when have fashion magazines ever been about the reality of an experience rather than the ritualistic staging prior to an event? Reading The Seventeen Magazine Project surprises me at every turn, not only because of Keiles’s maturity, but also because the construction of teenage femininity hasn’t changed significantly in the thirteen years or so since I read Seventeen magazine. It still depicts a teenage ideal as a white, heterosexual, young woman who can “just look at my nails and feel peppy!” Keiles’s response? “This is bleak. I wish Seventeen would suggest a hobby [for this girl] so she didn’t have to look to idle nail-gazing as her only source of joy.”

So, while my surprise was the depressing stagnation of beauty magazines, Keiles, a decade-plus my junior said her biggest surprise was:

…how willing our society is to accept an image of teenagers as pretty, stupid, and shallow.  Considering the fact that my generation is the future of the world, you’d think that the people controlling today’s media would want to set the bar a little higher.

Cross-posted from This Week in Lady News.