Stay-At-Home-Dads On The Rise? Not So Fast... - Ms. Magazine
Skip to content 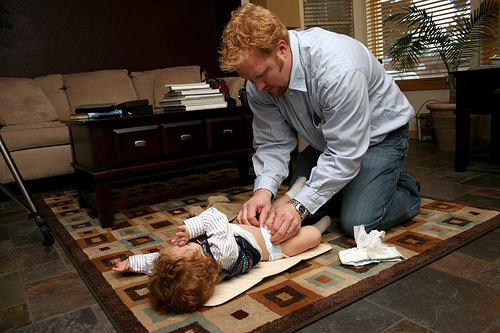 Stay-at-home dads are all the rage in the media since this rotten economy has forced many unemployed men back in the ranks of the homestead. Judging from the plethora of Father’s Day articles celebrating stay-at-home-dads, you would think that dads across the United States are turning into Mr. Mom at an unprecedented rate.

From a profile in Michigan’s Lansing State Journal:

[For Chris Singer], raising Tessa–who has huge, Gerber-baby blue eyes, adorably chubby legs and a smile that could melt the hardest of hearts–is mission one. That means nights without sleep, trips to the library and zoo, loads of diapers, bottles, burp cloths and the conviction that he’s doing the right thing right now.

From columnist Jeff Gillenkirk in the San Francisco Chronicle:

The number of stay-at-home dads rose nearly 60 percent between 2003 and 2008 and is expected to keep rising as the economy and family roles continue to change.

Don’t be fooled. These feel-good stories are trotted out for Father’s Day, but the reality is not so rosy. It’s true enough that the tide of layoffs has hit men harder than women. But bona fide primary caregiving fathers are still rare, and a man doesn’t automatically become a primary caregiver of the children simply because he’s unemployed or underemployed. The horrid worldwide economy has simply created a larger number of unemployed/underemployed men who aren’t picking up the slack at home.

On average, employed women devote much more time to child care and housework than employed men do, according to recent data from the government’s American Time Use Survey analyzed by two economists, Alan B. Krueger and Andreas Mueller.

When women are unemployed and looking for a job, the time they spend daily taking care of children nearly doubles. Unemployed men’s child care duties, by contrast, are virtually identical to those of their working counterparts, and they instead spend more time sleeping, watching TV and looking for a job, along with other domestic activities.

So despite media fantasies, men getting laid off means that many moms are now acting as both the primary caregiver and primary wage earner. Slacker dads, get up off your duffs and do the right thing by supporting the mothers of your children both financially and in the homestead.