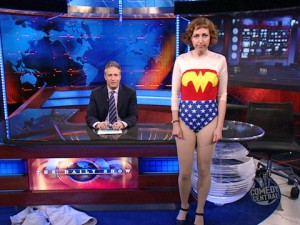 It’s time once again for another installment of our weekly blog roundup! This week, Ms. brings you weekend reading on Jon Stewart, Harper Lee, Helen Mirren, Gaga, Sartre and Beauvoir.

From The New York Times Opinionator: Just when we thought our relationship with Lady Gaga couldn’t get any more complicated, Nancy Bauer–with help from Simone de Beauvoir–offers an existentialist analysis of the Gaga phenomenon, self-expression vs. self-objectification and the state of feminism today.

Kelly Blanchard makes a modest proposal in a persuasive op-ed for The New York Times that birth control pills be available without a prescription.

At Jezebel, Irin takes on the eternally frustrating “lefty-boys’ club”-style sexism on progressive darling The Daily Show, and Jenna strikes back at dismissive columnists who’ve chosen to deprecate the American classic To Kill a Mockingbird on the 50th anniversary of its release.

Following the news that Ms. was  named one of the 100 best websites for women by Forbes,  Renee Martin at Womanist Musings rightly takes Forbes to task for compiling a list that fails to include marginalized women and reasserting “the idea that only a certain kind of woman matters.”

Muriel Kane at The Raw Story tells the disturbing tale of  a school district that blamed a disabled student for her own molestation.

At The Notion, Laura Flanders opines on the press turning the McChrystal fiasco into a manhood-measuring contest.

And finally, more news on the Dov Charney/American Apparel front: Kartina Richardson of The Loop 21 synthesizes all the recent revelations about the CEO and his company and determines that American Apparel wants you as naked and white as possible.

Above: Kristen Schaal strips to the Indigo Girls on The Daily Show.