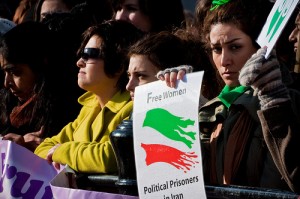 Urgent action is needed to help Zainab Jalalian, an Iranian political prisoner who may be executed at any moment. She was sentenced to death in November 2009 on charges of mohareb, the Islamic offense of waging war against God, because of her membership in the Kurdish Workers Party (PKK), a separatist organization that is illegal in Iran. Her plea to say goodbye to her family was met with “shut up” from the sentencing judge. She was condemned to death by hanging. Jalalian is at risk of imminent execution.

You can help by sending a letter to Navi Pillay, the UN High Commissioner for the Office of Human Rights and Ban Ki-Moon, the Secretary General of the United Nations, asking for Jalalian’s sentence to be overturned and for a new, impartial trial with access to legal counsel. A sample UN letter can be found here.  Here’s an excerpt:

I am writing to you regarding the case of Zainab Jalalian, a Iranian political prisoner sentenced to death on 26 Nov 2009 on charges of Mohareb and at risk of imminent execution.

On June 26, Kurdish human rights organizations reported that Zainab’s death sentence had been finalized and forwarded to the enforcement section. Her lawyer is reporting that she has been moved to another ward in preparation for execution and that, barring intervention by the UN, it is likely her sentence will soon be carried out.

Zainab was denied access to legal counsel at her trial; her plea to say goodbye to her family was met with, “shut up” by the sentencing judge, and she was condemned to death by hanging. This is in direct violation of the International Covenant on Civil and Political Rights (ICCPR), to which Iran is a signatory, which guarantees defendants access to legal counsel and a “fair and public hearing by a competent, independent and impartial tribunal” (Articles 14 and 10).

We ask that you force the Islamic Republic of Iran to comply with international law and norms, abide by treaties that the UN places its name on, and act to save her life.

Take a minute to show your solidarity with Iranian feminists and demand the release of Zainab Jalalian and other imprisoned women’s rights and human rights advocates.