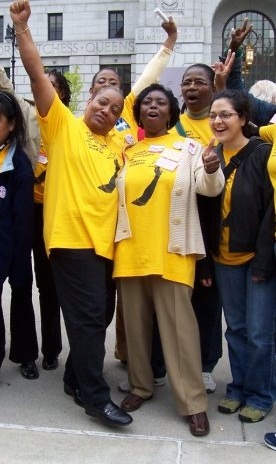 On Thursday, the New York State Senate passed a landmark bill granting overtime pay, paid vacation days, a day off each week, and protections against sexual harassment to domestic workers. David Paterson has promised he will sign it into law, giving thanks to the many workers who lobbied for its passage:

They provide all of us with an example of how individuals can, through struggle and dedication, bring about positive change in the face of skepticism and doubt. This achievement belongs to them, and I will be pleased to sign it into law on their behalf.

The bill’s passage concludes a six-year battle in the state legislature, and is a significant step toward protecting domestic workers. But some of its benefits were qualified: Advocates agreed to compromise on the proposed requirement for six paid holidays and six days of paid vacation, and instead mandate three paid vacation days annually–but only after a worker has been with an employer for a year.

In the New York metro area, 93 percent of domestic workers are women. The passage of the bill was due in large part to Domestic Workers United, a thriving New York City union of Caribbean, Latina and African nannies, housekeepers, and elderly caregivers.

FMLA at 30: Persisting Toward Paid Leave