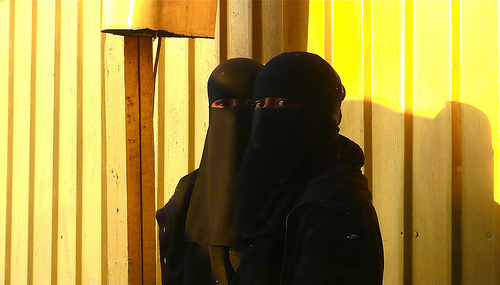 On Tuesday July 13, a day before Bastille Day, the French assembly voted to ban the full-face veil in France. The vote fell in step with similar bans being considered or enacted in other EU countries, such as Germany, Spain and Belgium. A Pew survey released days earlier showed that nearly 82 percent of French people supported the ban, which was reflected in the 336-1 vote in favor of it. The bill will now proceed to the French Senate in September, where it is expected to be approved.

The veil debate has been an ongoing issue in France, falling as it does at the interstices of French identity, feminism and multiculturalism. In a recent letter from Paris, a friend described how a grade school had dealt with the issue by refusing to allow veiled women to collect their kids at the end of the day. Women appearing veiled to pick up their children were simply told that their children would not be released to them if they appeared at the door covered. In some cases, the friend reported, this had discouraged women from wearing the full veil; in others, more fathers had suddenly found themselves on pick-up duty.

Interestingly, these veil debates are not relegated to the face veil issue alone. Waiting at a bank in Paris, the same friend witnessed a scene where the cashier refused to buzz in a black man because he was wearing a baseball cap and she could not see his face. He had to remove it to be allowed to enter and be served.

So from banks to grade schools to Parliament, the French have spoken loud and clear: They love the face and must see it. It is also unsurprising that they have chosen a decidedly philosophical basis for explaining their affinity for faces. Parisian cafes are resonant with vehement exclamations about “dissimulating the face,” referring to Jean Baudrillard’s social critique of post-modern life as inherently disconnected from the actual and authentic. Covering up your face with a full-face veil is a simulation, the pretense of an identity but one that prevents the onlooker from actually discerning it. In banning the face veil, the French argue, they are preventing Muslim women from posturing as individual citizens with singular identities without giving the onlooker the basis to interact with them at that level. Covered up, they are anonymous, observing and perceiving, pretending to exist but without being observed. Therefore, they create a precipitous imbalance of knowledge and power between them and their interlocutors. Baseball caps and full-face veils must be taken off in order to protect the parity of interaction.

For feminists digesting the veil ban, the question is complex. It is repugnant to consider hiding the female face as something that could ever be empowering to women. Hiding something so integral to selfhood comes close to ratifying the idea that the female form is singularly sexual and that hiding is an essential signifier of sexual purity. It is also true that in embracing the anonymity of the full-face veil, women are electing to be part of a visible collective that elides the boundaries between their individual identities as women and their collective allegiance to conservative Islam. Such a disavowal of individuality could be unproblematic if it could be proven that every woman wearing the full-face veil freely chooses it–a task that has so far proven to be difficult if not impossible.

Yet, ironically, the same philosophical basis for the French objection to “dissimulating the face” can be used to defend face veiling as a potentially feminist satire on French concepts of female beauty. In shrouding themselves, French Muslim women are engaging in a Baudrillardian pantomime that satirizes ideals of beauty that do not include their brown-skinned, henna-tattooed, curvaceous, immigrant selves. The shabby black shrouds become a crude revolt against the exclusionary sophistication of French haute couture and its accompanying ethnocentric depictions of the French female ideal. In visible opposition to these concepts of French femininity, shrouded women question their “reality” by refusing to participate visually in French culture–being “there” and “not there” at the same time.  With “French” beauty consistently constructed to exclude migrant identities and notions of beauty, perhaps a visible simulation of exclusion is necessary to start a debate on the question of whether all Frenchwomen’s faces are equally beloved.

Above image of veiled women from Flickr user Wolfiewolf under Creative Commons 3.0