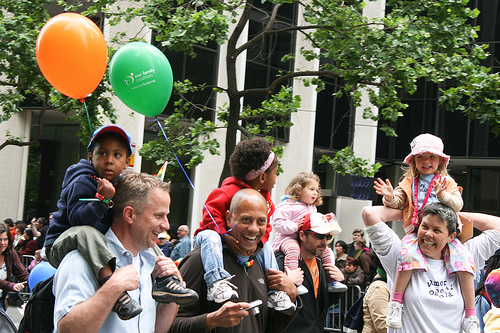 This week, Ms. learned from the blogosphere that gay parenting is better parenting; MAC is marketing maquiladora makeup; Vaseline launched a Facebook skin-whitening app; abortion hit primetime; and more. Gloria Feldt, The Real L Word, Bristol Palin and Angelina Jolie are all part of the best discussions of identity, politics, and identity politics on the feminist blog scene. Let’s round ’em up!

Alternet had good news for the LGBT community: New research shows the key to raising a healthy child is an egalitarian relationship, more common in same-sex partnerships. So feel free to let critics know, “Hey conservatives–gays are better parents than you!”

Angelina Jolie modeled gender-neutral parenting, responding to the media’s gender-policing of her 4-year-old daughter Shiloh, who goes by “John“: “I would never be the kind of parent to force somebody to be something they are not. I think that is just bad parenting.” (Jolie’s new movie Salt reportedly confounds gender as well).

In not-so-queer-parenting news, Bristol Palin and Levi Johnston are getting married. While Bristol claims Mama Grizzly didn’t know about the proposal, Anna North has her doubts, and a special offer for Jezebel readers: “For anyone who believes that Bristol went to Us Weekly without clearing it with Sarah and her people, I’ve got a house with a view of Russia to sell you.”

Pandagon caught U.S. corporations encouraging Indians to be something most aren’t: white.Vaseline has launched a Facebook skin-whitening app targeting Indian men, inviting users to lighten their profile pictures. And it doesn’t end there. Garnier, L’Oreal and Nivea have all released products for real-life whitening. Pam Spaulding sees the growing market as proof  “multinational companies have no problem making a buck over colorism.”

The Frisky calls out another beauty-industry gaffe: MAC and Roderte teamed up to launch a line of Mexican-inspired makeup, but made a major mistake when naming their nail polish. Jessica Wakeman points out that pink “Juarez” and green “Factory” are highly insensitive to the violence against women plaguing the city filled with maquiladoras.

On RH Reality Check , former Planned Parenthood president Gloria Feldt cheered Friday Night Lights for its realistic, primetime portrayal of abortion. Feldt knows firsthand what it’s like to be a pregnant teenager in hardscrabble Odessa, Texas (the town the show is based on).

Yet for every television triumph, there are plenty of failures. After Broadsheet called The Real L Word “a real straight male fantasy,” Salon.com asked creator Ilene Chaiken if she thinks about depictions of lesbians while making the show. Her response? “I worry about making good TV and entertaining people.”

And last, Feministing suggests Swedish feminists could have rethought burning the equivalent of $13,000. “I mean, I’m all for making radical statements to get your message across, but couldn’t have that dough gone to, say, women who are affected by the pay gap?” asked Vanessa, while conceding that charitable donations rarely get international coverage.