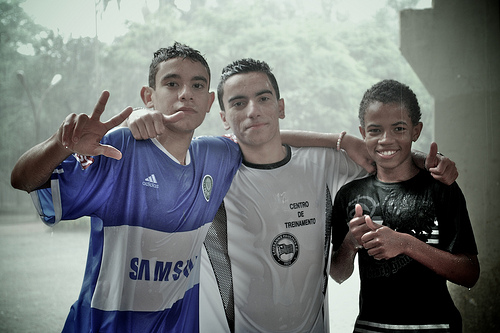 A troubling statistic from Brazil: Ten women are killed in the country every day due to domestic violence, according to a recent study called the “Map of Violence” published by the Sao Paulo Instituto Sangari.

The recent shocking case of soccer player Bruno Fernandes brought domestic violence in Brazil to worldwide attention. Police reported that Fernandes’ missing ex-girlfriend was strangled and fed to dogs. Her remains have not yet been found, and police said Fernandes has a reputation for violence. His cousin confessed that Fernandes watched as his friends and family killed the mother of his child.

The brutality of this incident is not uncommon in a country where the murder rate is 25.2 per 100,000 people, making it the country with the 10th most intentional homicides. Although, the rate is falling; in 1997, the rate was 25.4 per 100,000 people. In Brazil, most domestic murders are for absurd reasons:

Saying no to sex or wanting to break up the relationship make these cases. In 50 percent of them the motive was qualified as futile, such as cases resulting from domestic arguments. Ten percent are passional crimes, related to jealousy, for example, and 10 percent are related to using or selling drugs.

However, Promundo, a Brazilian nonprofit, hopes to combine men’s love for soccer with education about violence toward women. In a new project, men will be encouraged to participate in a four-month amateur soccer tournament that will also include discussions about violence and gender norms.

Soccer is key to understanding masculinity and promoting nonviolence to men in Brazil. A report from a meeting in Cape Town, South Africa on July 15 and 16, 2008 with the Sonke Gender Justice Network, Grassroot Soccer and the Family Violence Prevention Fund explored the connection between soccer’s quadrennial World Cup and teaching men and boys about social justice:

There remain enormous possibilities around football [soccer] for high profile sports-linked media campaigns, with both players and teams … through 2010 to 2014. The challenges include the need to strengthen alliances with women’s rights activists and other social justice movements, to engage the private sector and men that other men look up to and that this engagement be integrated into gender justice more broadly. All this needs to be done in a way that advances these goals [without] making them a mere trend, and effectively taps into men’s self interest and the benefits of change in positive messaging.

The program is still in the pilot stage and Promundo is seeking funding to advance it. If it proves a success, that’s the sort of achieved goal that will supersede anything scored in the World Cup.