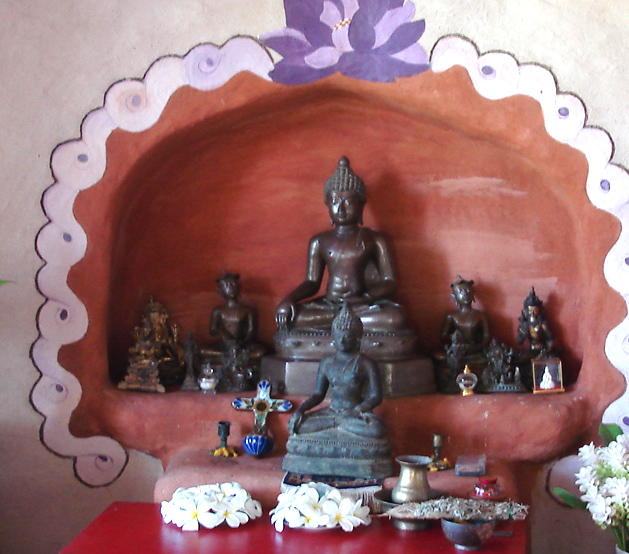 On a recent trip to Thailand, my activist-prone daughter and I (Becky Thompson) had the lucky opportunity to meet with U.S.-born feminist activist Ginger Norwood and Thai Buddhist feminist Ouyporn Khuankaew, who co-founded in 2002 a retreat center for activists from the region who are seeking rejuvenation. In clay earth adobe buildings that the women and friends from the village have constructed with their own hands, the two women have provided space for hundreds of women to work, eat and relax together. At the center, participants from NGOs, health care organizations and social-service agencies practice mindfulness and meditation—eating their meals in silence and opening and closing workshops with attention to the breath. Together, they strategize about how to build organizations that work with refugees, stop sexual violence against girls and women, and support indigenous projects in Thailand, Burma, India and Sri Lanka.

When we visited the center, Khuankaew and Norwood were in the middle of hosting a retreat for directors of women’s organizations working in Thailand. During a break in the morning sessions, Khuankaew explained,

Women leaders often come to the center so exhausted that slowing down enough to be able to meditate is not even an option. What the women need first is naps, a safe space to rest.

While the participants typically come with the goal of better serving  those they work with, oftentimes the retreats enable them to attend to their own lives as well, sometimes for the first time. This is why, says Norwood,

The courses are often exhausting and challenging for people; for the first time they are looking at their own lives/suffering/identities—the impact of socialization, structural violence and patriarchy on themselves—and not just at their ‘target groups’ or ‘beneficiaries.’

On the second day of a new retreat, after lunch, instead of facilitating a one-hour meditation as planned, Khuankaew instructed the women to lay down on bamboo mats, cover themselves with light sheets to ward off mosquitoes and let themselves rest for a while. Glancing into the colorful, open-air studio where the women were sleeping peacefully, I marveled at the inviting scene and how entirely odd it would be to see such a setup at a U.S. conference—imagine 15 grown women napping together on the floor of a conference room after a lively plenary. Sign me up!

In their workshops, the two women propose that living fully, for women, need not require sacrificing themselves for others at their own expense. Khuankaew explains,

Thai (and other Asian) women have been taught that their happiness is when everyone in their families is happy—their children, husbands, parents. Being a woman is not itself worthy. They have been taught not to think of their own needs, feelings and health.

This is what makes the retreat center a transformative space, as the women experience—through meditation, talking, healthy food, rest and more conversation—self love and self worth as an essential part of their work in the world.

For Khuankaew and Norwood, working effectively with women activists means starting where they are, seeing Buddhism as a living tool for social change, not simply a doctrine to follow. Says Khuankaew,

Sometimes, women who come to the retreats are so overwhelmed by the trauma they have witnessed that listening to each other is very difficult. I tell them that listening is a form of meditation. Mediation does not only involve watching and letting go of your own mind—getting lost in a space separate from other people. Mediation can also include being a witness, seeing each other as survivors, as activists, as mothers and visionaries.  Deep listening is a skill we practice together.

Supporting the practice of engaged Buddhism begins with wrestling it free of ways it has been misinterpreted and used to oppress women. “I hear stories about how monks have told women that they will draw bad karma toward themselves if they left their abusive husbands or ended a pregnancy,” says Khuankaew. “The concept of karma has been used in a manipulative way to reinforce patriarchy rather than encourage liberation.”

As a devout Buddhist who has read many of the early writings of Buddhism, she teaches the women that Buddha, in fact, said very little about karma: “To a large extent karma has been blown out of proportion and used as a weapon against women’s autonomy,” she said.

Because Khuankaew is a Buddhist practitioner whose retreat center is built in the village where she grew up, she has insider knowledge that has allowed her to both embrace and critique Buddhism at the same time.  Ginger understands that, as a woman from the U.S., her work is to support but not try to control the trajectory of Thai feminism and human rights work. Witnessing the two of them working together is like watching dancers finding their groove in space, making art by knowing each other’s strengths, spotting for each other through their performance.

On the night before we left Thailand, Khuankaew and Norwood joined us and two lesbian feminist activists who have been working in Thailand for a vegetarian dinner in Chiang Mai. At the dinner Khuankaew talked about her passion for working with women. She also spoke of her isolation as one of the only out lesbian Buddhist Thai feminists in the region:

I have to go to Bangkok to see people who look like me. Sometimes it is very tough.  I always wonder why it takes so much to make one become whole and human. This struggle is why my side job is as a recruiter of lesbian feminists. I ask women what they do with desire they feel, many of whom have been taught they should feel no desire period.

One woman recently told Khuankaew that when she feels desire, she scrubs her toilet. “I told her that the Buddha never said that women shouldn’t feel desire. The Buddha was all about manifesting joy,” Khaunkaew said.

In a time when we see so many examples of the U.S. military and the World Bank intervening in countries without the people’s consent, it is truly heartening to see living, breathing examples of transnational feminism grounded in local communities and dedicated to the lives of women and children.

ABOVE: Photo of Thai altar courtesy of Diane Harriford.