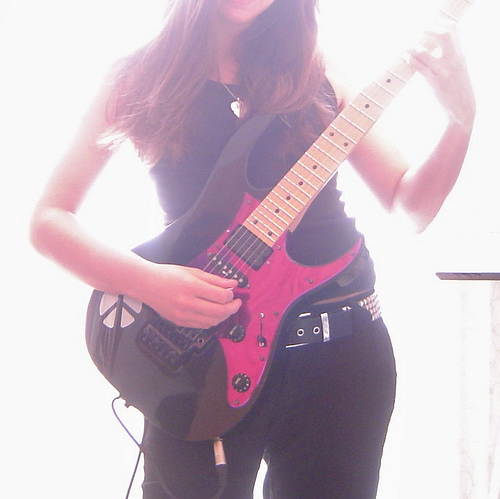 Women in rock have come a long way since Joan Jett was told girls don’t play electric guitar. We have guitars made for women, by women. We have girl rock camps. Surely the music world is a friendlier place in this day and age. Right?

Maybe not so much. In March, National Public Radio surveyed more than 700 women musicians, ranging from orchestra conductors to R&B stars like Bettye LaVette. The questions covered everything from instruments and gear to advice given to aspiring women musicians. NPR has posted all of their responses online and unedited under the title “Hey Ladies: Being a Woman Musician Today.” The overall results: The vast majority of women talk about the sexism they face in a still male-dominated music industry, and how it takes hard work and dignity to overcome it.

Lauren Denitzio, who plays guitar and sings for one of my favorite New Jersey punk bands, The Measure [sa], answered the question “Do you think being a woman and a musician is different from being a man and a musician?” with “absolutely.” She continued,

You automatically have to prove yourself far more than a man does and even though people may think they’re not being sexist, most people will give guys the benefit of the doubt when it comes to whether or not they’re a serious musician. Most men assume I play bass instead of guitar and I still get asked if I’m actually IN the band and not just WITH the band…

When we go on tour and I’m regularly the only woman playing an instrument out of four or five bands, still, in 2010, it’s glaringly obvious to me that there’s something stopping most women from being in full-time touring bands. It’s unfortunate but true.

I was excited to see how these women have made it, since my own pipe dream of being a rock star was shattered when I was 15. I definitely attribute sexism: Trying to learn guitar, I encountered bewildered music store clerks and dismissive male friends. With little support, I gave up. (And I had already decided that journalism was just as badass.)

Maybe I wouldn’t have given up so easily if I’d gotten advice from women musicians like Kelly Ogden of The Dollyrots:

When I first met Joan Jett, before we were signed to her label, I asked her about being a woman and doing this and she said to just focus on my craft and be myself. I think that’s really all there is to it. It’s just like anything else you want to do in life, you have do decide you’re going to do it, work really hard and then go.

Many musicians noted that a woman has to be very conscious of how she presents her sexuality. Country artist Gretchen Peters said:

A young woman musician… ought to think long and hard about how she feels about her image, and the possible pressure she might feel from her record company or management to “”be sexy””. This doesn’t concern me from a “morality” standpoint–it bothers me as a feminist, as it undermines the idea that women can be talented, brilliant and successful musicians/songwriters/singers without using their sexuality to get noticed.

Much of the advice is about finding positive support. Solo artist Brandi Carlile said:

The best thing that ever happened to women in music in my opinion is a sense of community. Surround yourself with people who teach and inspire you and you might find the power in numbers. Women can sell tickets, records, and being a rockstar is not a boy’s game.

Damn straight! Kudos to all these women musicians and NPR for such an exhaustive survey.