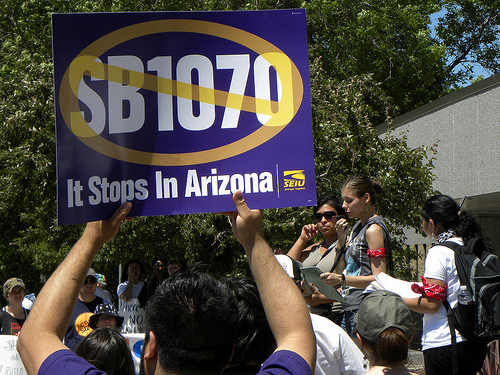 The most controversial parts of Arizona’s new immigration law won’t take effect at midnight as originally scheduled, thanks to federal judge Susan Bolton. SB 1070, signed into law in late April, would have allowed police to detain people based on suspected immigration status and would have made it a state crime for a person to lack immigration documents–two provisions Bolton ruled unconstitutional. The judge wrote:

There is a substantial likelihood that officers will wrongfully arrest legal resident aliens. By enforcing this statute, Arizona would impose a “distinct, unusual and extraordinary” burden on legal resident aliens that only the federal government has the authority to impose.

Arizona Central has a breakdown of the other provisions that won’t be taking effect, including:

The portion that makes it a crime for illegal immigrants to solicit, apply for or perform work. (This does not include the section on day laborers.)

The portion that allows for a warrantless arrest of a person where there is probable cause to believe they have committed a public offense that makes them removable from the United States.

This is only the beginning of the fight, since Arizona is expected to immediately appeal the decision to the U.S. Ninth Circuit Court of Appeals in San Francisco. Racewire has a color chart which lays out the seven lawsuits challenging SB 1070, along with a basic explanation of the law.

With Bolton’s ruling, SB 1070 loses much of its bite. What does remain? The part stating “Any person who is arrested shall have the person’s immigration status determined before the person is released.”

You can read more on Arizona’s frightening anti-immigrant legislation here, or in the new issue of Ms. magazine, out on newsstands August 10 and available at your doorstep if you join the Ms. community today!

ABOVE: Protesters from a May rally against SB 1070. Photo from Flickr user fibonacciblue. Creative Commons Attribution 2.0