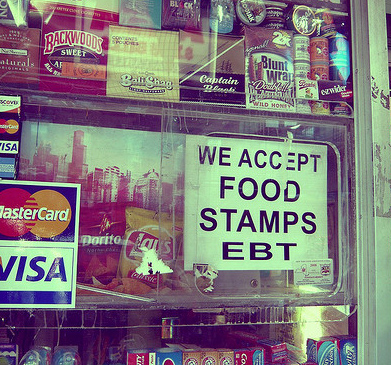 The Senate has voted to cut funding for SNAP, formerly known as food stamps. Over 40 million Americans receive Supplemental Nutrition Assistance Program benefits. In 2014, the assistance for a family of three will drop by about $50 a month. This is going to hit low-income women hard.

SNAP statistics don’t break down recipients by gender, but we can connect the dots. It’s no secret that poverty is a women’s issue. Thirteen percent of U.S. women were living in poverty in 2008, compared to 9.6 percent of men, according to the National Women’s Law Center, [PDF] and a similar poverty gap exists in every state in the country. Overall, more than 15 million American women live in poverty.

Annie Lowry at the Washington Independent called the SNAP cuts “unprecedented,” and did a breakdown of the pain it will cause:

American food stamps are not generous, averaging only $4.50 a day even after being bumped up in the recession-era stimulus–less than you’d need to buy two meals at McDonald’s. And since the start of the recession, the number of families depending on them has skyrocketed.

The Washington Post’s Ezra Klein explains how poor the Senate’s decision is:

But you really can’t think of a worse program to cut than SNAP. SNAP is an extraordinarily well-targeted stimulus. It goes to poor households, for something they need to buy. According to Mark Zandi’s numbers, it’s literally the most stimulative way to spend a dollar: Better than state and local aid, or unemployment insurance. You get more than $1.70 of economic activity for each buck you put in.

Bernie Sanders put up an amendment last month to cut about $35 billion in oil and gas subsidies. It failed.

So while our nation continues to subsidize oil companies, women and kids will find it even tougher to get the help they need.

[UPDATE: This piece has been updated to correctly state the drop in assistance for a family of three. Please note the correct text, above.]